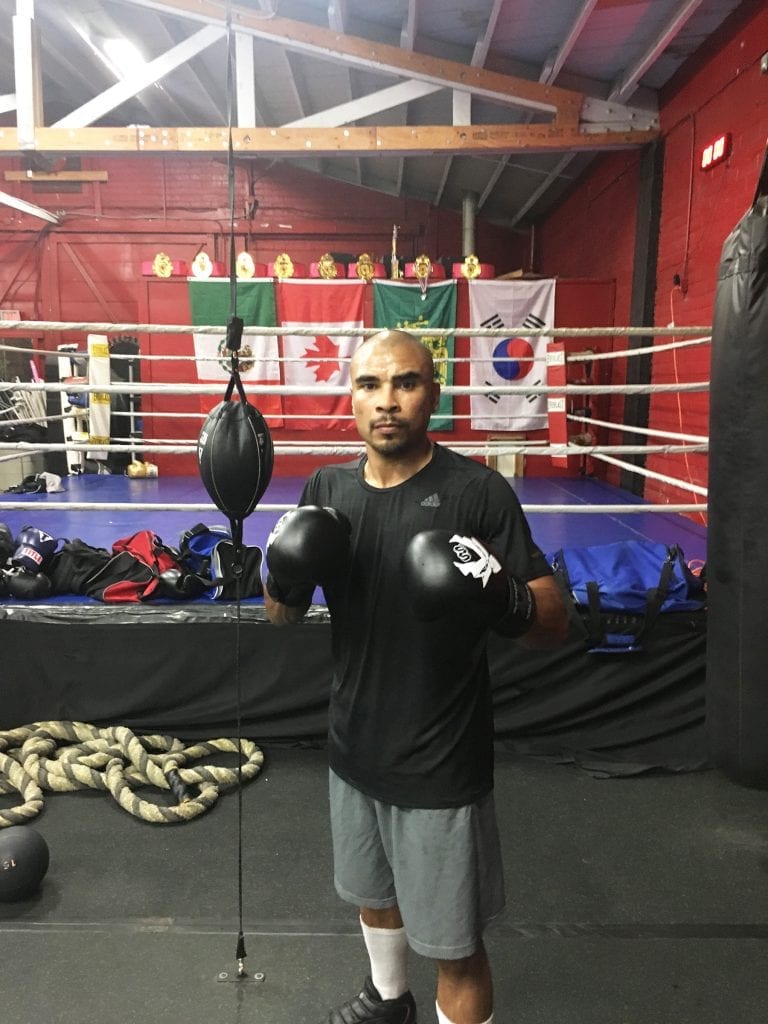 Though he has certainly demonstrated other attributes during an extended MMA career, Robbie “Problems” Peralta has always felt that his fists and considerable punching power have been his greatest assets.

Now, the 32-year-old resident of Valley Center who spent his formative years growing up in a tough Escondido neighborhood will have a golden opportunity to showcase what he does best. And that’s to unleash what he terms his “heavy hands.”

On November 9 in the frontier outpost of Casper Wyoming, the 5-7, 155-pound Peralta will be a participant in a quarterfinal match of the $100,000 World Bare Knuckle Fighting Federation Lightweight Tournament. Should Peralta put it all together, do some serious bashing and prove his mettle at this event, not only will his profile expand but so will his wallet.

Peralta has never before gone the bare knuckles route but he firmly believes it’s an option that’s literally right in his wheelhouse. Obviously taking note of the fact that Peralta had delivered 13 outright knockouts or technical knockouts in his 19 MMA wins, organizers of the WBKFFLT recognized his legitimate punching potential and offered him an invitation. Seeing this as a possible ideal fit given his skill set, Peralta was quick to accept. “Man, I said to myself, ‘let’s do this,’ ” he recalls.

But make no mistake, this move from MMA to bare knuckles is a decided step up in terms of the sheer brutality and physical toll involved. No gloves are used and only the wrist and thumb are wrapped. It’s right out of the late 1800s, when the legendary John L. Sullivan was pummeling overmatched opponents into submission.

And yet, Peralta embraces this daunting challenge. “You know you’re going to take a lot more damage and probably get cut up a lot more,” he says. “But you can’t be scared to fight. You’ve got to have the will to stay in there and battle it out.”

Though he took Taekwondo as a youngster from ages five through 12, Peralta’s real warring took place on the mean streets of Escondido. Growing up in an environment that was decidedly gang-oriented, he became a proficient street fighter who could more than hold his own and learned the value of not backing down.

Serendipity then entered his life when a friend told him about a promoter who was looking for a couple of fighters to participate in a MMA card down in Tijuana. Anxious at the chance to make some spending cash, Peralta agreed to take part although he had absolutely no experience at this kind of combat. Not knowing a whit about how to counter certain moves, it wasn’t all that long before a considerably more seasoned foe choked him out.

And yet, instead of being discouraged by this turn of events, he found surprising motivation in them and soon had committed himself to a regimen of serious training under the tutelage of Lloyd “Cadillac” Marchbanks.

That dedication was to pay off in a big way because over a period of six-and-a-half years, Peralta was to emerge victorious with remarkable frequency, winning 18 matches while losing but three. This impressive run was highlighted by TKO triumphs over Thomas Noel and Darrell Montague that resulted in Peralta capturing belts in both the feather and bantamweight classes.

However, when some personal and outside issues began to negatively affect him, Peralta admits that he “lost some motivation” and began slacking off somewhat on his training and preparation. Predictably, he suffered the consequences, dropping five of his last six outings including a TKO loss to Juan Archuleta at last June’s Bellator 201 promotion that was held at Pechanga.

But now Peralta claims to be in a much better place, both emotionally as well as physically. Armed with a renewed frame of mind and determined to reassert as well as redeem himself, Peralta looks at his upcoming bare knuckle bout as a great way to reboot his career.

Though he insists he’ll be in even more refined shape come fight day, Peralta’s current training, which incorporates such disciplines as boxing, sparring, strength and conditioning, jumping rope,  extensive mitt work, lengthy jogs and explosive sprints has him finely tuned. As ring announcer Michael Buffer might intone, Peralta is primed and “ready to rumble.”

Should Peralta advance through the draw at Casper, it could be life-changing given the money that’s at stake. With three daughters to provide for and a mother he hopes to look after, Robbie hopes his fists can deliver the means to the desired end of an even better financial situation. As with most MMA fighters who aren’t headline names, Peralta is required to work a daytime job – in his case toiling as a wastewater operator at Valley View Casino.

When asked whether he’ll have any fear of the unknown given that he’s a bare knuckles novice, Peralta shakes his head no. “But you’ll always be a bit nervous,” Robbie conveys, “and there’s always that sense of anticipation. But once you get in there, start moving around and begin to exchange, that all goes away and you just concentrate on what you’re doing.”

Regardless of how things turn out, Peralta plans to continue competing whether that means switching back to MMA events or more actively pursuing additional bare knuckle cards. “I feel I’ve got a natural ability to fight so at least for the next few years, I want to stay with it in one way or the other.”

And as for that interesting nickname of “Problems” that he carries, let him explain its origination. “Oh, I got that because growing up as a teenager I sometimes got in trouble,” he frankly admits. “I came from a tough neighborhood so that was just part of the deal. I definitely had my share of problems.”

Hopefully, Peralta can present plenty of problems in the form of his thunderous punches come November 9 against his yet-to-be-named opponent.