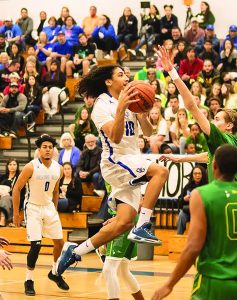 Ever on the attack, Patriot guard Damian Miller who tallied 11 points during the OG win, penetrates in deep versus Patrick Henry.

In an inspired and relentless performance before an enthusiastic home crowd on Saturday night, the Orange Glen hoop team rode a dominating 27-point third quarter en route to a convincing 81-51 win over Patrick Henry in Division II quarterfinal action.

In a game that featured two teams that go by the name of the Patriots, it was OG that struck like the vaunted minutemen and was clearly the more revolutionary.

By virtue of their lopsided victory, which came on the heels of a first-round blowout of Oceanside (80-54), the fourth-seeded Pats won their 20th game of the season and now move onto the semifinals, where they will face formidable host Canyon Crest Academy on Wednesday night with the winner being just one step away from claiming a championship.

The fact that OG not only bested but routed an accomplished PH squad was made all the more impressive by the fact that the No. 5 visiting Pats (20-9) had won five straight, including a postseason success over Horizon Christian Academy, and had steamrolled through the league portion of their schedule with a glossy 9-1 mark.

But they simply had no answer for the wave of OG offense that swept over them. If it wasn’t shooting forward Caedon Palmer (18 points) bombing them from the outside, then it was Nikola Kresovich (15 points) driving them to distraction with his power hoops in low and long-distance daggers. Then there was the sleek Doup Chuol (14 pts.) who stepped up with confidence to nail plenty of big shots. And what about the all-out hustling effort of Damian Miller? Not only did he get his share of points (11) but the junior was literally all over the court, tracking down loose balls, aggressively penetrating the lane and really getting after it on the boards although he’s only 5-foot-9. 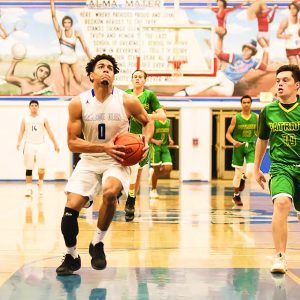 Guard Michael Diaz is focus personified as he prepares to drive to the hoop against PH.

As far as the eventual outcome was concerned, it was period number three that spelled the difference and told the story. Up by eight at the half, OG saw its lead sliced to five when PH guard Sam Galaif, who would finish with 12 points along with teammate Jayden Holloway,  went hard to the hoop, drew a foul and then dropped in a free throw to complete a 3-point play. At that moment, Henry was coming on and seemed poised to close the gap even further. Little did anyone know that the guests were about to be blown out, the victim of a 25-5 blitzkrieg.

Before it could even get its bearings, PH was being hit from all sides by a variety of tormentors. Kresovich tallied on a pair of layups while  the smooth stroking Palmer buried a couple of treys and also chipped in with a free throw. Miller was a huge factor as he drained a trifecta before putting home two late buckets off the glass. The smooth Michael Diaz, who did a splendid job of facilitating his teammates all night long, scored on a layup and then stuck a jumper. And sophomore Ryan Filoteo joined in on the act with a downtown 3-pointer. In what seemed like the blink of an eye, this game had morphed from being tightly contested to becoming an absolute wipeout.

Armed with a massive 62-37 margin entering the final eight minutes, the only real intrigue left was trying to guess when OG coach Chris Featherly would call off the dogs. He would do so with 3:03 remaining when he made wholesale changes and emptied his bench. Deservedly, the mainstays and architects of this noteworthy victory were saluted by the hometown crowd with cheers and applause as they left the court.

On this many splendored evening, the triumphant Pats did plenty of things right. They swung and moved the ball around with speed and precision. Though outsized, it was OG that was more assertive on the boards and fought with passion for rebounds. The Pats were also dogged on defense, hounding PH into numerous turnovers and empty possessions. Moreover, OG appeared to have an unlimited amount of energy as it was conspicuously juiced from start to finish. 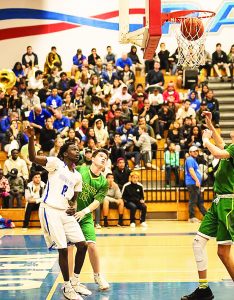 OG’s Doup Chuol looks back as two of his 14 points drop through the net.

Though there might have been a facet or two in which the Pats might have executed a bit better, their overall effort was superb. Right from the jump, OG seized the intuitive and never once trailed. And on the three occasions that Henry mounted a comeback and threatened to make things interesting, the Pats immediately responded and beat them back with decisive runs.  No matter what the circumstance, OG always seemed to have a handle on things and exerted a control over the game’s tempo that it never did relinquish.

And giving even more validation and credence to this huge win was the knowledge that OG was missing two of their starters, including the talented Trevor Owens, the team’s second leading scorer (12.9 PPG).

Without question, playing their best basketball of the season and peaking at just the right time, the Pats have become an offensive juggernaut, scoring a staggering 161 points in their first two playoff games. The fact that everything seems to be coalescing when it matters most hasn’t been lost on OG’s coach. “Right now,” says the engaged Featherly, “we’re playing at another speed.”

He knows that the next challenge will be a mighty difficult one but he likes where his squad is currently positioned. “We’re aware that Canyon Crest (No. 1 seed) is a great team that will play hard and is really tough on the defensive end,” the coach explains. “But we’ve made it a point to make sure that our practices are harder than our games. So we feel prepared for just about anything that we’ll run into. I really like where we’re headed.”

And well he should because if his Pats can maintain this roll and play to their potential, they could be headed towards the ultimate prize, a coveted CIF title.

Writer’s Note – All photos contained in this article in addition to other game shots as well as postgame and crowd pictures can be found at www.kerbscustom.com