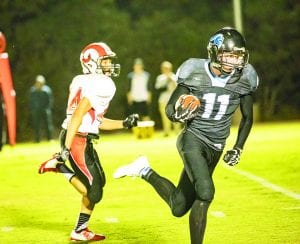 For nearly a year, Calvin Christian waited to even the score with a Foothills Christian squad that not only denied the Crusaders a second straight San Diego Section 8-man championship but had also spoiled a perfect season as well.

That 44-38 defeat, in which the Crusaders failed to capitalize on a bevy of scoring opportunities,  hung over the CC program like a taunting specter that constantly reminded Coach Randy Kreglow and crew of what might have been.

So when Calvin’s 2017 schedule was released, the November 3rd game versus FC was the one contest that the Crusaders had circled in red ink and anticipated above all others. They more than welcomed the chance to make amends and exact a redeeming measure of revenge.

And boy, did they ever! This was payback on a massive scale. In a rather stunning performance, the Crusaders literally grounded the Knights into the turf with a 75-24 win that featured a remarkable 11 rushing touchdowns. With this highly satisfying victory, Calvin concluded the regular season with an unblemished slate (10-0) and gives every appearance of a team that won’t be denied in its quest for another championship.

Next up for the Crusaders will be a semifinal playoff game this coming Friday night against Julian (7-2), a team that is riding a six-game winning streak and twice has scored 60 or more points.

But those numbers don’t figure to faze the Crusaders in the slightest. After all, the Eagles came into their matchup with CC on a seven-game roll, having thrice tallied 50 or more points. But that was of little consequence as the Crusaders were on a mission to not only win but to thoroughly dominate.

Early on, last Friday night’s game was relatively close but then the Crusaders tapped into a gusher of TDs, outscoring the visiting Knights by a staggering 54 to 18 in the second and third quarters to turn the contest into a rout.

The astounding success that Calvin was having on the ground was reflected by the fact that quarterback Matt Lafler attempted just four passes (one completion) all evening long. This was a convincing victory that had its roots in an awesome rushing attack that had FC bewildered and totally at a loss.

Leading the land assault was the blond-haired Wesley Salzman, who proved to be as powerful as a bulldozer and more elusive than a cat. Making the most of his 13 carries, the 6-foot junior ran wild, amassing a remarkable 292 yards while crossing the goal line on three occasions. The highlight of Salzman’s banner night came in the form of a memorable 80-yard jaunt.

Senior Daniel Esguerra, another shifty running back capable of breaking loose at any time, matched Salzman’s paydirt total of three while contributing 109 rushing yards to the cause. And though Lafler wasn’t required to do much passing, he made a real impact with his feet, stepping his way to a 103-yard, two-touchdown performance.

And yet there were still other Crusaders who made noise when given the opportunity to tote the rock. Junior Evan Senti and seniors Arthur Torres and Luke Bousema were each responsible for a touchdown run.

Based on the amount of points that it put up on the scoreboard, Calvin’s offense was certainly deserving of plenty of kudos and accolades. But the Crusader defense was also a key factor in this triumph. Having yielded 24 points in the first half, CC’s defenders  then dramatically ratcheted up their intensity, stiffened and pitched a shutout after intermission.

Pacing the team in total tackles were linebackers Senti and Lafler, down lineman Noah Brouwer and cornerback Bryce Lovisa, all of whom registered seven stops while defensive end Bousema made his presence felt with six. Brouwer also knocked down a brace of passes.

Moreover, the active Leo Gonzalez certainly had his moments with a pair of timely sacks while senior Nico Brouwer and Sterling Stires got in on the act by registering one apiece. And Lovisa’s three quarterback hurries were certainly worthy of mention.

And one final tip of the cap must go to Esguerra, who doubles as the Crusaders’ placekicking specialist. The possessor of a stout right leg capable of generating lots of pop, Esguerra was  perfect on all nine of his PAT attempts, not an accomplishment to be dismissed lightly.

So now that the Crusaders have gotten their sweet revenge, all that remains is to chase their second championship in three seasons. Certainly everything looks to be in place to hoist another trophy. Ranked No. 1 in the S.D. Section, having scored 151 points in their last two games and with a whirlwind of momentum behind them, the Crusaders couldn’t be more ideally positioned to finish things off with a bang.

In reality, it seems as if only a force of nature is capable of stopping rampaging Calvin now.