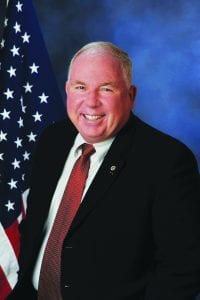 Paul “Mac” McNamara is preparing to officially announce his candidacy for mayor of Escondido. He will be running against incumbent Sam Abed, who is seeking a third term. The official kick-off for the “Time for a Change” kick-off will be January 28, 2-5 p.m. at the Forgotten Barrel Winery.
The election will be in November of 2018.
McNamara, who served 27 ½ years in the U.S. Marine Corps, retiring in 2003 with the rank of colonel, is now executive director of the MCRD (Marine Corps Recruit Depot) Museum Foundation, a non-profit. He has held this position for two years. In this role, he supports museum programs which include veteran outreach and teaching values through history to youth, especially youth in Title I schools. The museum is a fascinating repository of history of the Marines. “I’m still finding out things,” he says.
McNamara moved to this area 20 years ago, in February 1998, when he was serving as the Marine attaché to the U.S. Defense Intelligence Agency in Mexico City, where his job was fighting human trafficking and the drug trade.
He was deployed to Beirut, Lebanon during the civil war, when his unit conducted a non-combatant evacuation. He served in the 1st, 2nd, 3rd and 4th Marine Aircraft Wings (Okinawa, North Carolina, Hawaii, and California) In addition to squadron staff tours, he commanded both a Marine Helicopter Squadron and Marine Aircraft Group.
He participated in Operation Desert Storm and other smaller operations. He flew in support of relief operations during the eruption of Mount Pinatubo, in the Philippines. He also supported other hurricane and natural disaster relief operations.
During his 20 years in Escondido, McNamara has been very active in civic affairs. This is his second term as a trustee on the Palomar College board.
After leaving the Marine Corps he worked in the private sector in the management of defense technology and engineering programs. He was general manager for a SDVOSB, a for-profit LLC that specialized in Analysis, and Technical and Engineering services. Before that he was general manager of a joint venture between the Inupiat Native Alaskans (Eskimos) from Barrow, Alaska, and Native Hawaiians. He was hired to turn the company around, which he did.
He was chief operating officer and co-founder for Shee Atika Technologies, an engineering, and Technical Services Native Alaskan (Tlingit) owned LLC from Sitka, Alaska.
As VP and COO of Technology Intelligence International, an information architecture design and development company he authored the Marine Corps’ initial overarching Command and Control vision as well as transformational IT efforts for the United States Navy.
Now out of the private sector, McNamara has been increasingly attracted to the idea of “serving something bigger than myself.”
Besides serving on the college board he is a member and volunteer of numerous community organizations, including the Executive Boards of the Escondido Rotary Club (President Elect FY -17-18), former member of the Executive Board of the Escondido Charitable Foundation, and, until recently, the Executive Board of Girls Incorporated of San Diego.