Patterson sees the big picture after Pats fall to Bishop’s 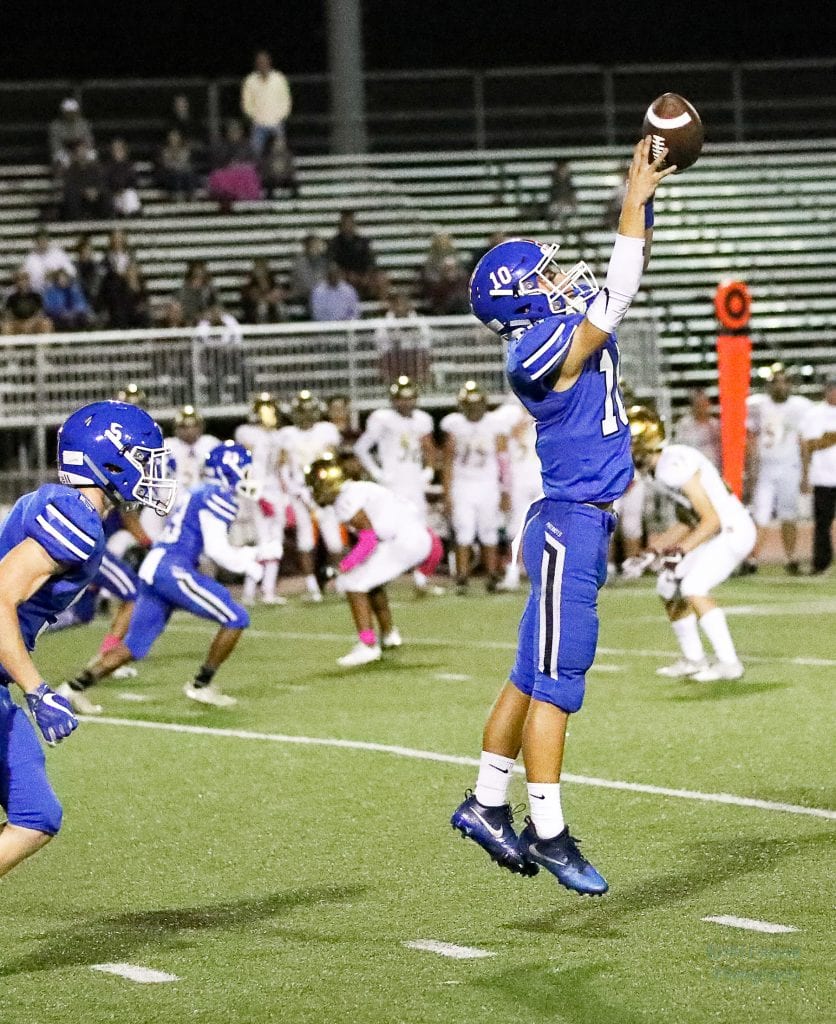 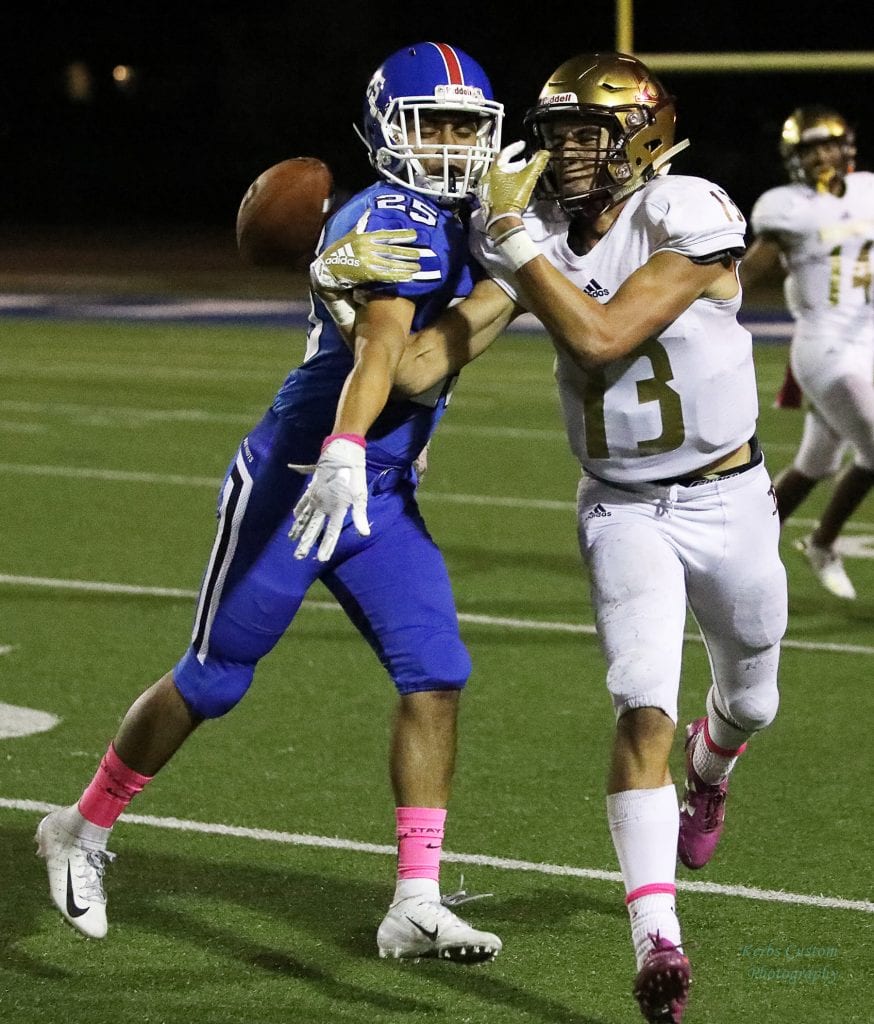 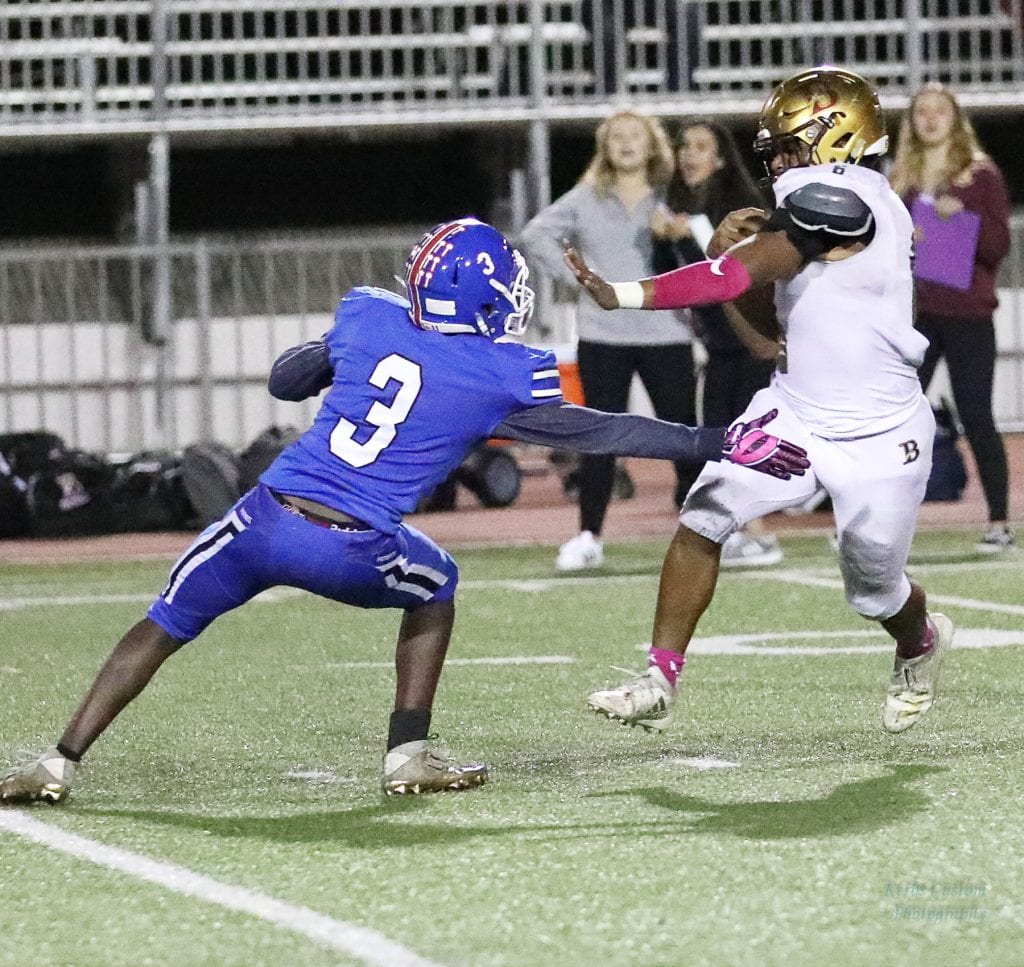 Knights’ running back Gabe Thomas prepares to apply a stiff arm to a Patriot defender while on his way to a pivotal 64-yard touchdown run. 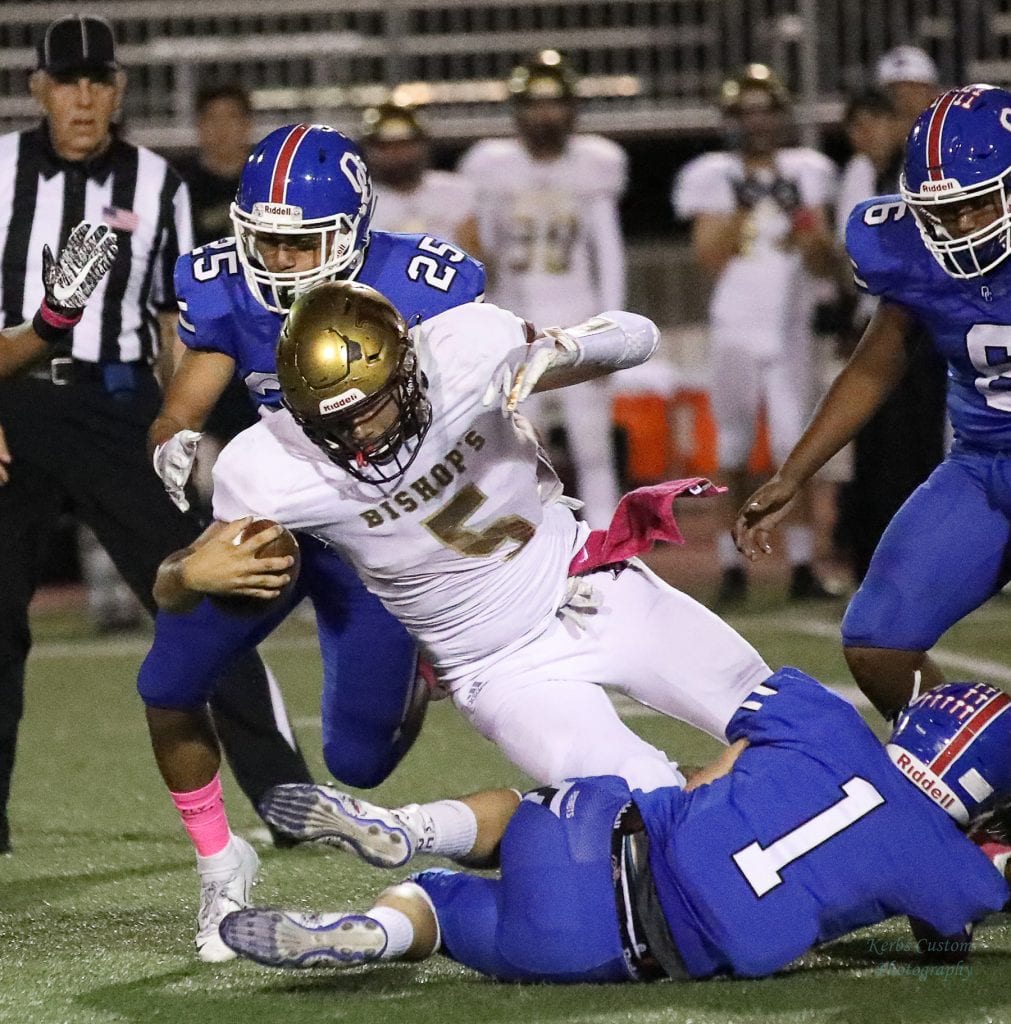 One of the primary reasons Orange Glen head coach Jason Patterson resonates in such a positive way with his players is because at his core, he’s definitely an upbeat and reinforcing kind of guy.

He’s sees the tremendous strides his team has made this season after a challenging 2017 campaign in which the Patriots won but a single game. Patterson loves the manner in which his players compete and firmly believes that if they continue to work hard and truly commit to the task at hand, a football revival at OG is perhaps just around the corner.

That’s why in the aftermath of last Friday night’s 28-0 loss to a physically imposing Bishop’s team, Patterson was hardly discouraged or dismayed. “Yes, at times we were a little bit sluggish tonight,” the coach admitted. “But asides from a couple of breakdowns, I thought the defense played really well. And make no mistake, we’ve got a very good football team that can match up against just about anyone.”

With their well-earned victory, the Knights (4-3 overall) took over sole possession of the top spot in the Coastal standings with a 2-0 mark while the host Pats (5-2) had their league mark leveled at 1 and 1.

A scoreless first quarter between these two squads was highlighted by a partially blocked punt by Knight Dylan Hunt and the stout defensive work of Orange Glen lineman Carlos Galan and Bishop’s Graham Cartwright, both of whom seemed to be all over the field while making impactful tackles.

But on their first possession of the second stanza, the Knights were destined to strike paydirt on an impressive 12-play, 89-yard march. This lengthy advance featured a pair of bullet passes from bulky quarterback Dominic Haley – the first a 21-yard connection with leaping Champion Johnson on the other end while the second was a clutch 15-yard fourth-down conversion catch by Clay Petry. The scoring pitch came from 16 yards out and was the result of a slightly underthrown ball that speedy receiver Clarence Freeman IV came back for in expert fashion. Bishop’s had broken the ice at 7-0 with 5:25 remaining in the first half.

Shortly thereafter, OG quarterback Ethan Villalobos couldn’t sky high enough for an airmailed snap that was eventually recovered by Gabe Thomas that set the Knights up in prime scoring position just outside the red zone. But just when it appeared as if Bishop’s was about to quickly capitalize on the turnover, the Patriots’ ballhawking defensive back Tristen Smith did a masterful job of  sitting down in coverage and came up with a huge interception on the very next play to short-circuit the threat.

However, the visitors managed to get the ball back with the clock winding down and did they ever deliver a bolt of lightning. On a second-and-long play, the powerfully built Thomas got through a hole, found some room and after shaking loose of a tackle, proceeded to deftly cut back before motoring some 64 yards for a stunning touchdown with a mere 28 seconds left before intermission. Not only did this long-distance jaunt help to expand the Knights’ lead to 14-0 but one sensed that it had game-defining ramifications.

Early in the fourth quarter the Pats were on the move thanks in large part to a previous 12-yard rush by Cael Patterson that came off of a direct snap while OG was in punt formation. But alas, a fourth-and-short pass was thrown behind Patterson and this promising advance ended up dying at the Knights’ 32-yard line.

The contest was put out of reach two possessions later when the bullish Champion snared a nicely disguised screen pass from Haley and after finding some open space in the flat, he hightailed down the left sideline for a back-breaking 68-yard catch-and-run touchdown. With only 4:18 still to be played, all that really remained was for the Knights to begin their well-earned celebration. “Bishop’s is really well coached and in this game, they did a lot of good things,” praised OG coach Patterson.

One of the critical components to Bishop’s victory was its ability to control the point of attack on defense and often shut down any holes for that other Patterson, this one named Cael. Continually stacking the line of scrimmage, the Knights made the determined and talented Pat running back earn everyone of his 128 yards which came on a hefty 35 carries. It’s no secret that Cael is the spear of OG’s attack and in this tilt, Bishop’s did a splendid job of containing this dangerous and fluid ballcarrier. “Our offense just wasn’t in its normal groove,” informed the elder Patterson. “they shut us down pretty good.”

And though the Pats defense did yield some pivotal big-yardage plays, it nonetheless demonstrated plenty of physicality and showed lots of upside. Linebacker Julian Lesa was a mighty force while registering 10 solo stops (13 total) in addition to racking up 2.0 tackles for loss. Safety Dylan Ewing certainly had his moments while knocking down a pair of passes and getting in on 6 tackles. With his latest pick, DB Smith reaffirmed the fact that he is one of the North County’s most opportunistic defenders. And what about the continued excellence of Galan (7 tackles), the impressive emergence of 6-4 lineman Damien Gainey (8 tackles) and the rock-solid play of end John Simmons (5 stops, caused fumble.)

Nothing that happened against Bishop’s will shake coach Patterson’s faith in his guys. He fully expects them to come out firing against a vulnerable 2-5 La Jolla County Day tomorrow night in another meaningful Coastal matchup. As Patterson told his disappointed but unbowed team last Friday night in the aftermath of only their second defeat, “Just remember, this is a good football team and we’re going to prove it next week.”

Of that Patterson has no doubts. To him, the glass is always near full!