Pats trying to stay ready as best they can 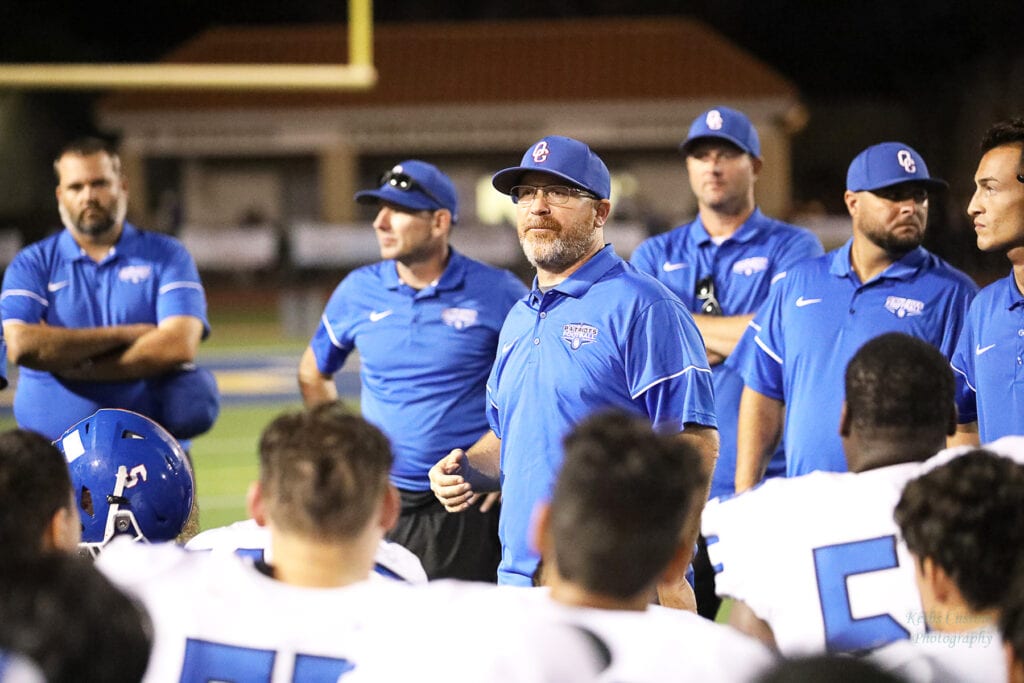 Like all the other prep football teams throughout the County, the Orange Glen Patriots are attempting to navigate their way through the unprecedented circumstances that currently exist because of the constantly looming specter of COVID-19.

Despite the fact that other states have kickstarted football participation at the high school level, California has decided to take a much more tentative approach and opted on the side of extreme caution. Who can say with any assurance at this point whether that posture has been unduly excessive or even a bit draconian? Certainly, taking into account the health, safety and well-being of young athletes must always be the top priority but can being understandably wary ever cross a line and thereby foster exaggerated fear?

Regardless, if the coronavirus had never materialized, then the Pats would already be fully immersed in their season and hoping to enhance a winning culture that has taken root under the direction of spirited coach Jason Patterson, now in his seventh season as the head man at OG.

But with the CIF edict that there would be no fall sports taking place until the end of the calendar year, Patterson and his crew have had to do the best they can to at least create some sense of continuity.

Let’s take a look at how this delayed and belated season hopes to shake out and what the Pats are doing in the interim to stay as ready as possible so that they can hit the ground running when and if they get a final go-ahead.

At the present time, this is what we know for sure. If there is no alarming spike in COVID-19 cases and conditions have stabilized, then OG is expected to begin live practice on December 14. Moreover, on December 31, a scrimmage is to take place on the Pats’ home field with OG welcoming squads from Del Norte, Rancho Buena Vista and Classical Academy.

The Pats are scheduled to play a 10-game regular-season slate with a barnburner of an opener to be contested on January 8 against intracity rival Escondido.

Since Orange Glen High is currently operating with a virtual/distance learning approach, there is no student presence on campus which has definitely impacted Patterson’s ability to interact with his players. Having not seen any of his charges in person since March, Patterson has had to adapt in order to stay in touch.

At present, twice a week via Zoom, OG’s coach has been able to conduct a one-hour football class that has featured such items as chalk talk, reviewing film, drawing up plays, installing offensive and defensive schemes as well as taking any questions his team might care to pose. Recommendations for individual workouts are also offered.

Patterson has been greatly encouraged by the response concerning this form of contact with approximately 95% of the squad logging in. “I’m not super technically advanced,” says Patterson with a laugh, “but honestly, things have gone really well. The kids are doing a good job of staying locked in and doing it right.”

There is the potential that sometime between now and the official start of practice, things may loosen up to the point whereby, if the proper protocols are put into place, the Pats may be permitted to partake in some conditioning on campus. But this possibility remains sketchy at best.

Should the season indeed come to fruition, Patterson expects anywhere from 40 to 45 candidates to turn out for the team. In all likelihood, after an attrition rate is factored in, look for the Pats’ roster to number somewhere in the neighborhood of 35 players.

Coming off two seasons in which the Patriots collectively won a total of 17 games, Patterson has a very positive vibe about his club’s prospects come January. The offense should be productive with dual-threat quarterback Dennis Andrew at the helm, a corps of talented receivers at his disposal and a seasoned offensive line that could be stout. Yes, the Pats will sorely miss stellar and prolific running back Cael Patterson but the ground game still should be able to get it done even if the workload has to be shared. Among the candidates that will have a chance to tote the rock is Cael’s younger brother Danye.

As for the defense, it has the look of a dependable one with experienced down linemen and a promising secondary. Add to that solid special team units and no wonder the coach is upbeat. “Thanks to both of our lines, we should be physical and strong upfront,” says Patterson, “and if we can stay healthy and our depth doesn’t become a problem, we could be a really good football team. These players know how to work hard.”

Though Patterson certainly believes in making safety the paramount consideration, if the environment appears encouraging, he is fully onboard with getting back to business. “If we can all work together and do this in a constructive way,” he informs, “I think it’s the right thing to do to get the kids back on the field and competing. I know my players are really excited to get going.”

Come late this year, here’s hoping they have the chance to do exactly that.