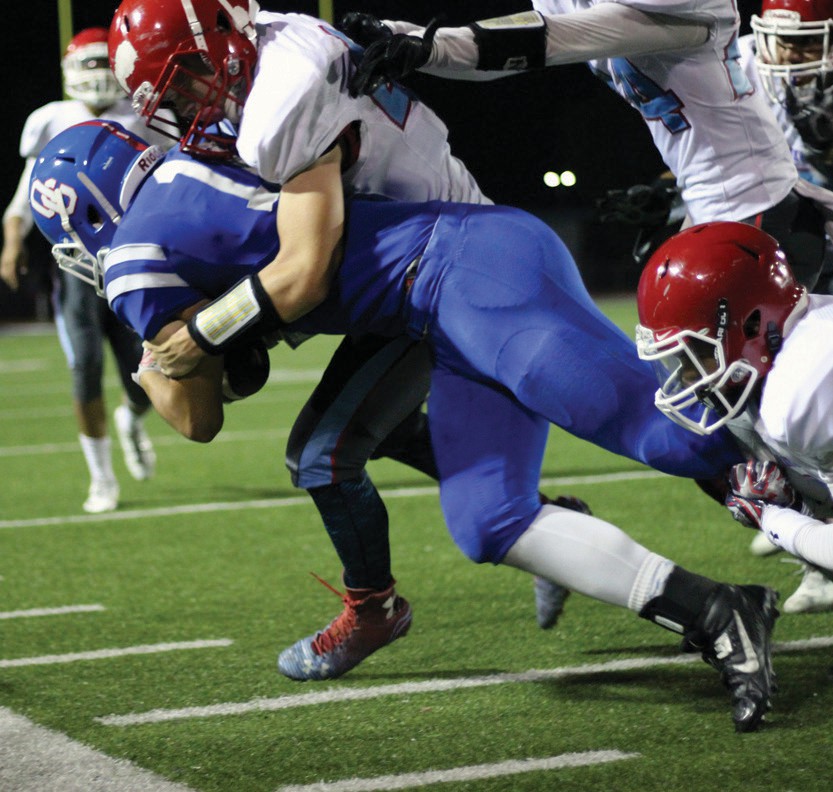 Receiver Billy Mercado stretches for some additional yardage after one of his nine receptions.

The tension was thick surrounding the Friday night matchup between El Cajon Valley and the host team, the Orange Glen Patriots. The Braves were looking to extend their undefeated win streak to five, while the Patriots were hoping to get back on track after a loss to their cross-town rival San Pasqual the previous week.

With a stalemate taking place for much of the first quarter, the Patriots eventually secured the first points of the game on a 33-yard pass from senior quarterback Blaine Bailey to receiver Malachi Russell, who bolted his way into the end zone. A quick slant route by receiver Billy Mercado earned a two-point conversion to give the Pats an 8-0 advantage late in the first quarter.

But then the Braves came roaring back. The county’s leading rusher, Tyson Smith, led his team down the field with less than three minutes remaining in the opening stanza. After a trio of quick first-down conversions, Smith sped his way into the end zone from 14 yards out to put the Braves on the board. After a completed two-point conversion, the game was now tied at 8-8.

The second quarter continued the trend of thrilling runs with yet another nifty Smith rush. Slicing and dicing, the quarterback maneuvered his way 45 yards down the field to put the Braves in front 14-8.

But the Pats would not be discouraged. Bailey completed a screen pass to Russell who shadowed behind his blockers, brushed off a couple of defenders and took another one to the house for his second touchdown of the night.

With the game tied at 14, the Pats defense started effectively zoning in on Smith. But just as it seemed that strategy was working, speedy back Luis Morales shot through a gap on his way to a 46-yard touchdown run. When Morales punched in a two-point conversion as well, ECV had reclaimed the advantage at 22-14.

The Pats were hoping to generate some momentum right before going into the locker room and they did just that.

Calm and collected, quarterback Bailey floated a silky 20-yard pass to receiver Brandon Montes to place his team on the Braves’ 20-yard line. On the very next snap, Bailey found his favorite target Russell, running a post route towards the end zone. Dropping back into the pocket, Blaine surveyed the field and sent the ball soaring for another TD hookup with his standout receiver. When OG’s two-point conversion attempt failed, El Cajon left the field holding onto a narrow, 22-20 margin.

The second half began with the Patriots taking possession after the kickoff. But fresh out the locker room, the Braves picked off a Bailey pass. After the defender was swarmed by blue jerseys, the Braves were set up in prime field position with the ball being placed on the Patriots 17-yard line. Smith then handed off to running back Maquel Garner who hop-stepped behind a pile of linemen, burst out to his left and then found nothing but open green in front of him.

Down yet again by eight points, the Patriots once more turned to their calm quarterback to guide them to the Promised Land. Not surprisingly, Bailey would deliver.

After a couple runs of from Jacob Guzman set up the Patriots in good field position, Bailey went for the kill. Set up in shotgun formation, the Pat signal caller received the snap, loaded up and sent a bullet to a slashing Montes, who brought down the ball for a 37-yard touchdown. He also caught a two-point conversion to even the game at 28.

The contest then shifted into a defensive battle. After the kickoff, the Patriots defense stuffed the Braves four times to force a turnover on downs. However, almost immediately after, the Braves intercepted another pass from Bailey, reclaiming the ball on their own 4-yard line. After two long runs by Smith and Varner, the Braves found themselves back in Patriots territory, with the end zone clearly in sight. Again the Pats defense rose to the occasion and forced another fumble, gaining possession as time ran out, marking the end of the third quarter.

Unable to get into any flow or rhythm with their offense, the Patriots were forced to punt to an eager Braves offense. The Braves soon tacked on a 24-yard run to set themselves up at the Patriots’ 44-yard line. After another long run by Varner on the very next snap, the Braves found themselves in the Patriots’ red zone. With time becoming a precious commodity, El Cajon turned to its superstar to finish off the sensational drive. As the center hiked the ball, Smith caught it, faked right and powered his way up the left sideline for an easy 10-yard touchdown. After completing the two-point conversion, Smith had put his squad back on top at 36-28.

After a quick defensive stand by ECV, the Patriots were forced to punt. With the ball again in his hands, Smith practically repeated his last sequence. Juking and faking around the defense, he rushed for his fourth touchdown of the night with just two minutes left, essentially sealing the deal and insuring another Braves victory.

While this contest was filled with many highlight plays, the game ball clearly belonged to Smith who lived up to his reputation with plenty of scintillating play. His energy clearly dictates the manner in which his team will perform.

“My role is to give my team momentum so we can play to our full potential,” Smith said.

With their best start since 1995, the Braves improved to 5-0 and travel to Chula Vista next Friday in hopes of keeping their undefeated season alive.

As for the Patriots, their record slips to 2-3. But the fire is far from out. The players still believe that with some tweaks and adjustments, they have what it takes to be heard from in the second half of the season. But it all starts with the veterans on the team.

“My role is to be a leader,” Bailey explained. “When I am lacking, the team tends to suffer. When I am playing well and being the leader, we can beat anyone.”

The Patriots travel to Montgomery on Friday night looking to return to the .500 mark.