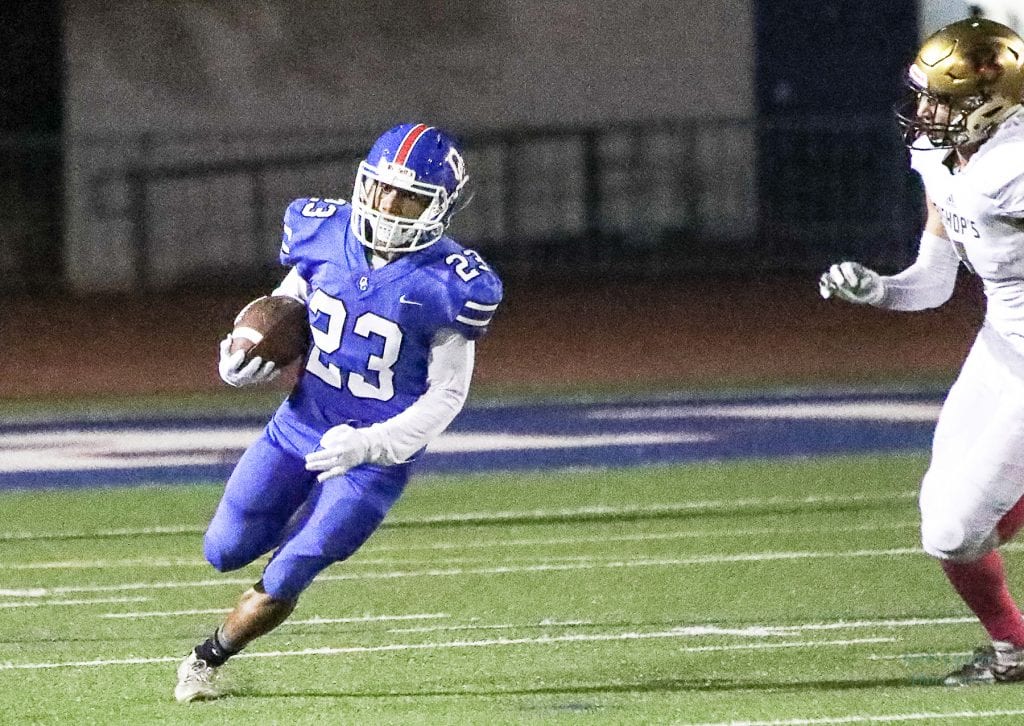 Moray Steward, shown here in a game versus San Pasqual, was a valuable wingman for star running back Cael Patterson as he amassed 114 yards in offense during OG’s huge win over Maranatha Christian. Photo by Lenny Kerbs

Simply stated, could the Eagles come up with a game plan to at least contain if not stop the Patriots’ Cael Patterson, one of San Diego County’s most prolific and dynamite running backs? In a nutshell, the answer was a resounding NO WAY!

In a performance that only enhanced the magnificent season that he was already experiencing, the shifty Patterson was the clearly the showstopper as he dashed and juked his way to 263 yards and five touchdowns on the ground during OG’s decisive 48-7 victory. And just for good measure, Patterson demonstrated his versatility by grabbing hold of a TD reception to boot.

And so by virtue of Patterson’s heroics as well as the notable contributions of a host of teammates, OG (7-3) continued to build on its impressive turnaround season and will now host Holtville (9-2) this coming Friday night in what should be an interesting semifinal matchup.

In truth, any suspense that their latest contest might have held was quickly removed when the Pats raced to a 20-7 first quarter lead and never looked back. When the hosts then added three more scores in the second stanza, it was all over but the shouting.

Though Patterson provided much of the fireworks on offense, there were other Pats who made an impression on that side of the ball. Sophomore quarterback Ethan Villalobos was efficiency personified as he tossed two touchdowns in just five passing attempts. Meanwhile, the speedy and multi-dimensional Moray Steward not only rushed for 73 yards but he electrified the crowd when he easily outraced the Eagle secondary en route to a 41-yard TD catch-and run.

Also meriting mention was another Patterson, this one named Dayne, who in his varsity debut showed that he’s got some of his older brother’s genes and moves while rushing for 55 yards in limited duty.

Somewhat overshadowed by the offensive onslaught was the suffocating work done by the Patriot defense. Other than allowing a first quarter score, the OG defenders were stout and operated in a virtual shutdown mode.

The linebacking tandem of Ruben Ramirez and the acclaimed Julien Lesa was nothing short of outstanding, ranging all over the place while combining for 18 stops and an eye-popping five tackles for loss.

Others who also had their moments were lineman John Simmons, who did what he does best by registering a sack while Juan Rocha looked sharp on the back end with a pair of pass deflections.

In the aftermath of OG’s win, C. Patterson commented that his team wanted to prove its mettle   versus MC which it most certainly did.  He then indicated that the Pats now wish to make an even bigger statement this coming Friday night when they welcome the Vikings to town.

Meanwhile, his head coach and father Jason Patterson, was truly upbeat about the way the Pats running game and defense was hitting on all cylinders and sees no reason why his club can’t continue playing at a high level in the pressurized environment of the playoffs.

Especially, if the dynamic Cael Patterson has anything to say about it.