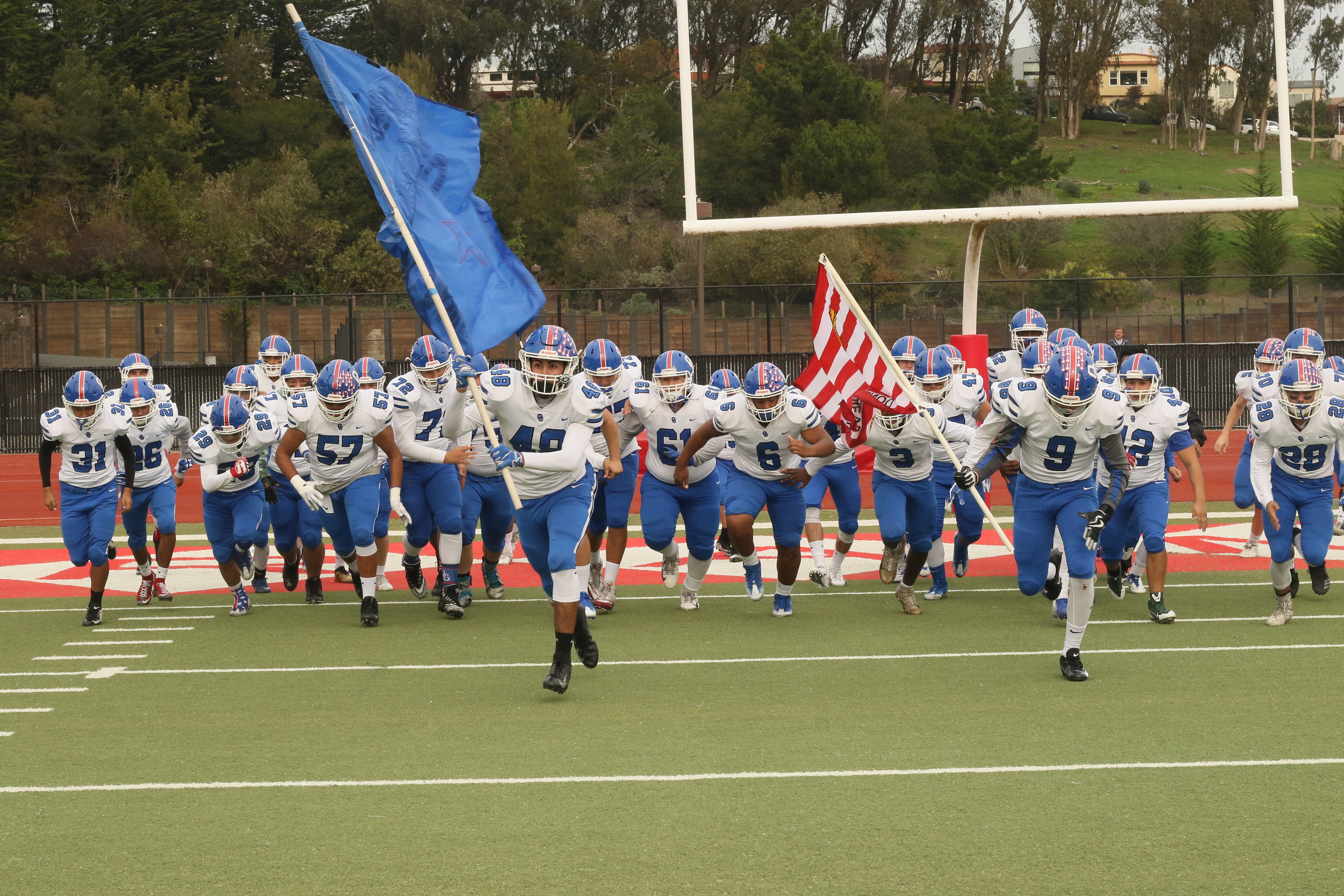 In a season in which the Orange Glen football team rose to unexpected heights, stunned the prognosticators and proved to be the most surprising squad in all of San Diego County, the Patriots did everything but scale the mountaintop. But damn, if they didn’t give it one hell of a shot!

In a hard fought 6-A State Championship game held last Saturday afternoon at City College of San Francisco, the Lincoln Mustangs (representing Northern California) jumped out to an early lead and were able to repulse a gallant comeback bid by the Pats before ultimately securing a 24-13 win.

With the victory, the Mustangs completed a perfect 13-0 campaign and captured their first ever state title. And though OG’s season (10-4) didn’t end as hoped, it nonetheless was one for the history books with four postseason victories and the school’s first section title in some 51 years.

Though each team had notable performers on both sides of the ball, Lincoln quarterback Jovon Baker (231 total yards) proved to be the difference-maker with his three touchdown runs. Those scores were enough to offset OG’s two tallies which came as the result of Moray Steward’s dramatic kickoff return and a Cael Patterson tote from inside the 10-yard line.

The Mustangs were quick to seize the advantage when they took the game’s opening possession and struck paydirt. A 31-yard connection from Baker to tight end Ajani Adewusi and some impactful running by Desean Crawford helped move Lincoln in close. And from there Baker did the rest, leaping over the line of scrimmage for a 1-yard score. This tone-setting and time-consuming drive burned some 7:33 off the clock.

Lincoln would then add to their margin midway through the second quarter. Again it was Adewusi who came up clutch when he parlayed a wobbly Baker toss into a 22-yard reception while battling double coverage. That catch set up Isaac Kolberg’s 24-yard field goal which staked the Mustangs to a 10-0 halftime lead.

During the first 24 minutes of action, Lincoln had done a superb job of containing the Pats’ prolific running game which had accumulated nearly 3,000 yards on the year. Using multiple fronts and incorporating plenty of blitzes, the Mustangs made land travel a difficult exercise for the visitors from So Cal.

But thanks to Steward, the tenor of the game shifted right after intermission. Gathering in a kickoff at his own 3, the ever-dangerous Moray employed his nifty combo of speed and moves to find space, cut across the field and then hightail it down the opposite sideline. Moments later, he was crossing the goal line with a 97-yard cross-country trek that not only injected his team with a huge dose of adrenaline but brought OG to within four points.

However, the Mustangs were in no mood to relinquish the upper-hand as they immediately answered on their very next drive. Baker was clearly the catalyst on this advance as he followed up a 21-yard scamper with a 24-yard burst over the left side. Soon after, he was back in the end zone from short yardage. 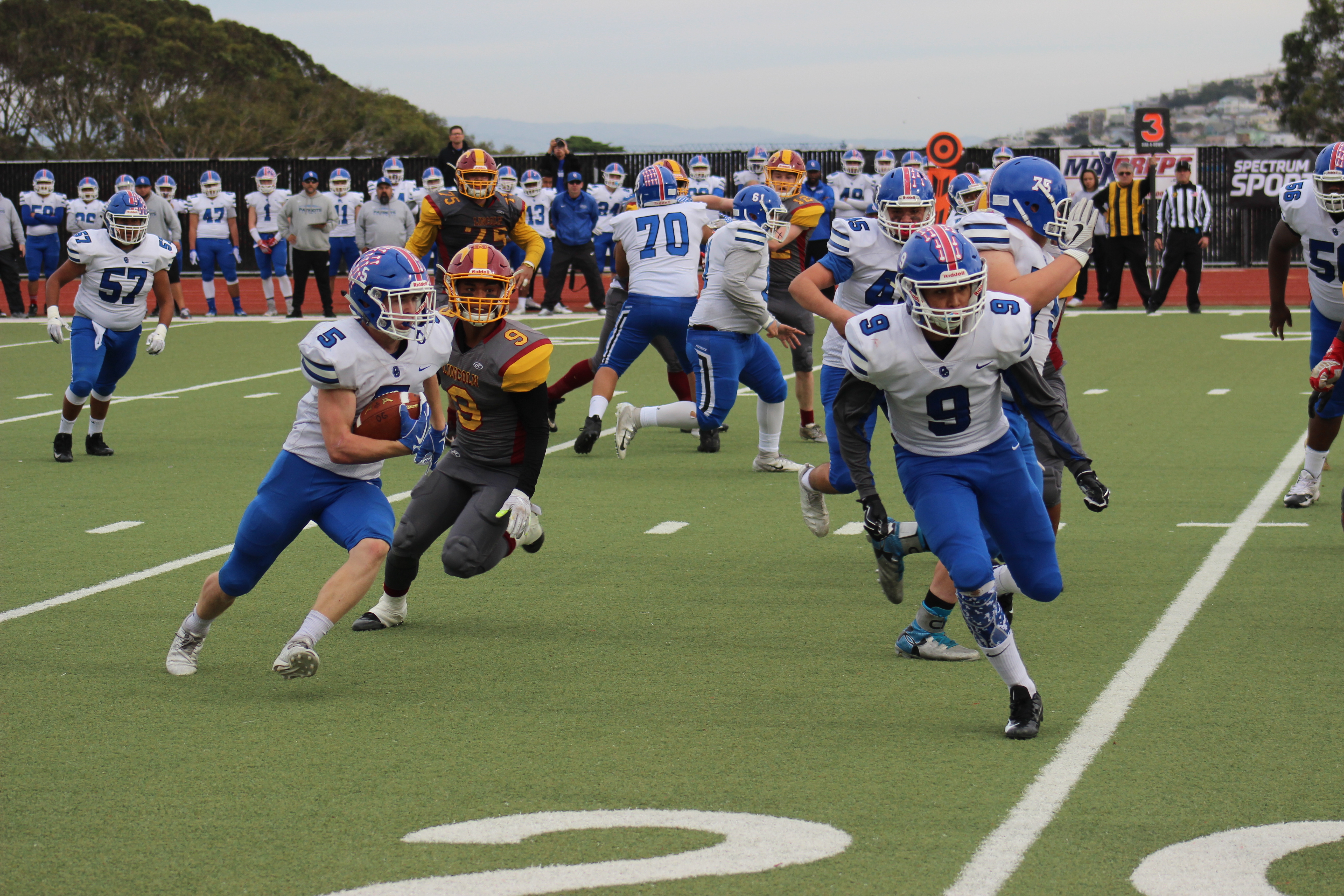 Forced once more into responding, OG’s season-long penchant for coming up big manifested itself. By this time, the Pats’ celebrated Patterson (132 rushing yards) was starting to exert his influence. First the versatile back delivered a 22-yard gain on the ground. Then, he pushed his club 30 yards further down the field with a key catch and run on a wheel route. At this stage Patterson seemed virtually unstoppable and he validated that perception by plunging into the end zone from 9 yards out. That narrowed the count to 17-13 with 4:12 still left to play in the third stanza.

Immediately thereafter and employing a tactic that indicated the Pats were clearly all in, head coach Jason Patterson instructed Nathan Kells to attempt an onside kick that proved to be successful when OG alertly recovered the ball on the Lincoln 45. But alas, OG wasn’t able to take advantage of this golden opportunity when Baker, doubling as a safety, registered a critical tackle for loss that forced a Patriot punt.

It was then left to that man Baker to create additional separation for the Mustangs. With just seven seconds having expired in the final quarter, the clever senior faked a handoff, spied room to his left and then took off on a 53-yard sprint down the far sideline that resulted in his third trip to paydirt.

Now trailing by 11, the Pats tried to rally but an interception by sophomore defensive back Jalen Williams and Adewusi’s blunting of a fake punt were the daggers that finally put the Pats away.

There’s no question that in addition to Baker’s heroics, Lincoln’s defense was arguably just as influential. Not only did it hold the potent OG attack to 186 total yards but the Mustangs rang up a staggering nine tackles for loss. Leading the charge was resolute linebacker Julian Aguirre who posted nine solo stops that included a pair of tackles for loss. Cornerback Jack Gaughan was also a force with a sack and two other tackles for loss while Rocky Marania got in on eight tackles. Moreover, the Mustangs clamped down on the Pats’ passing game, allowing sophomore Ethan Villalobos to complete just four of nine passes (61 yards), two of which were picked off.

But even in defeat, the OG defense was almost as noteworthy. The Patriots themselves logged six tackles for loss as well as having seven players get in on at least six stops. The mainstays were down lineman Ruben Ramirez and linebacker extraordinaire Julien Lesa who combined for a robust 26 tackles, three tackles for loss, a sack and a caused fumble. On the back end, Dylan Ewing-Villalobos played a prominent role with nine total tackles and two pass deflections while playmaker Tristen Smith was credited with a fumble recovery.

And so OG’s magnificent roll finally ran its course in the City by the Bay. But what a journey it had been! From the depths of a one-win season in 2017 to a staggering resurrection that few schools have ever matched, the Pats rediscovered their football mojo and in doing so revitalized a proud gridiron tradition that had been lying dormant.

To begin with, what the Patriots accomplished in 2018 will long be remembered as a fitting tribute to the positivity and dedication of the coaches led by Patterson who not only excelled at the X’s and O’s but instilled a deep and abiding belief in the team that they oversaw.

And as for the players, their legacy will reside in the fact that they refused to be defined by the past and instead committed themselves to forging an inspiring, remarkable and historic path that will forever warm their hearts whenever they reflect back on it.

No, the Pats didn’t quite make it to the very summit but their tremendous climb up the mountain is now an indelible part of OG sports lore.