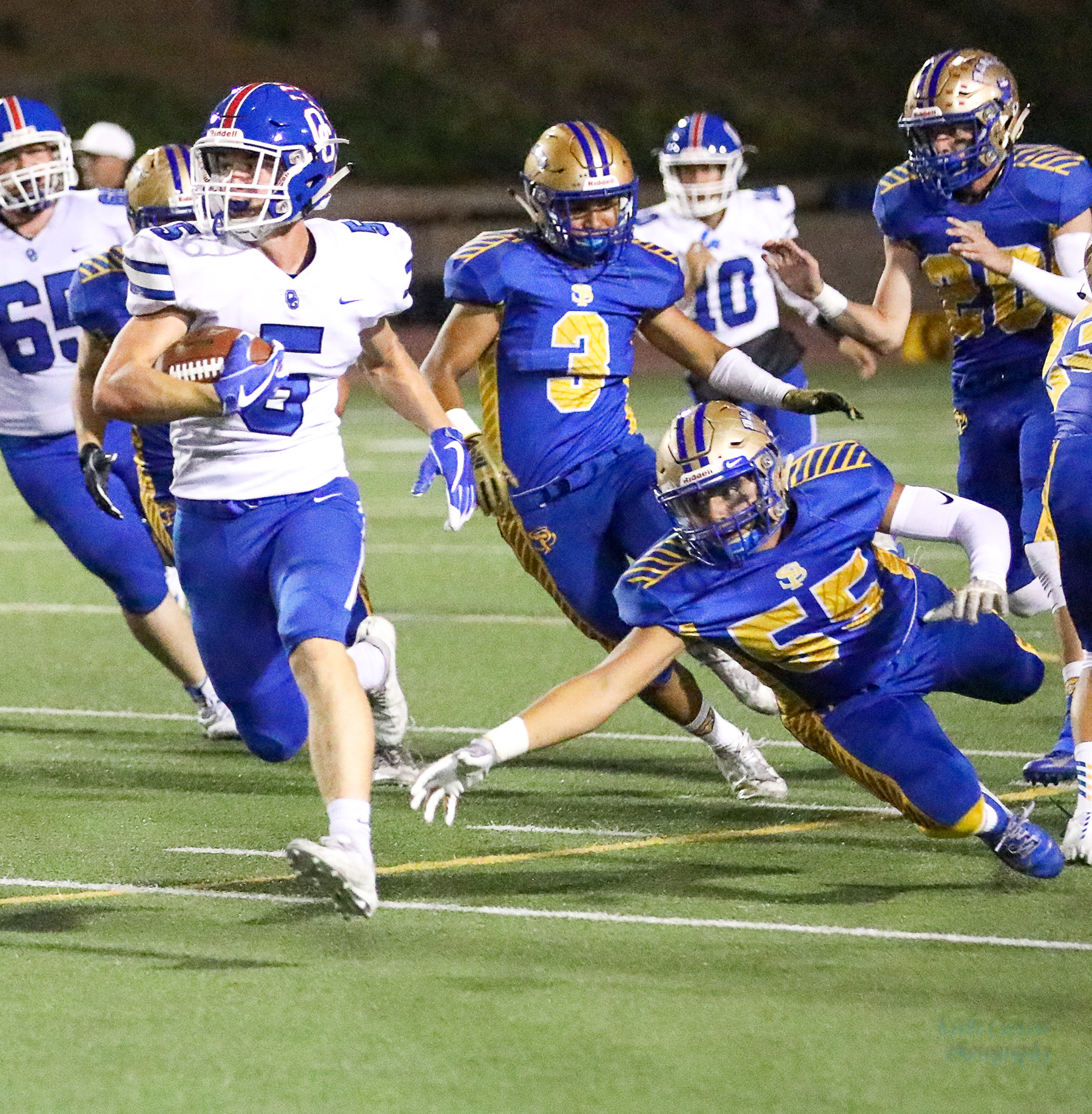 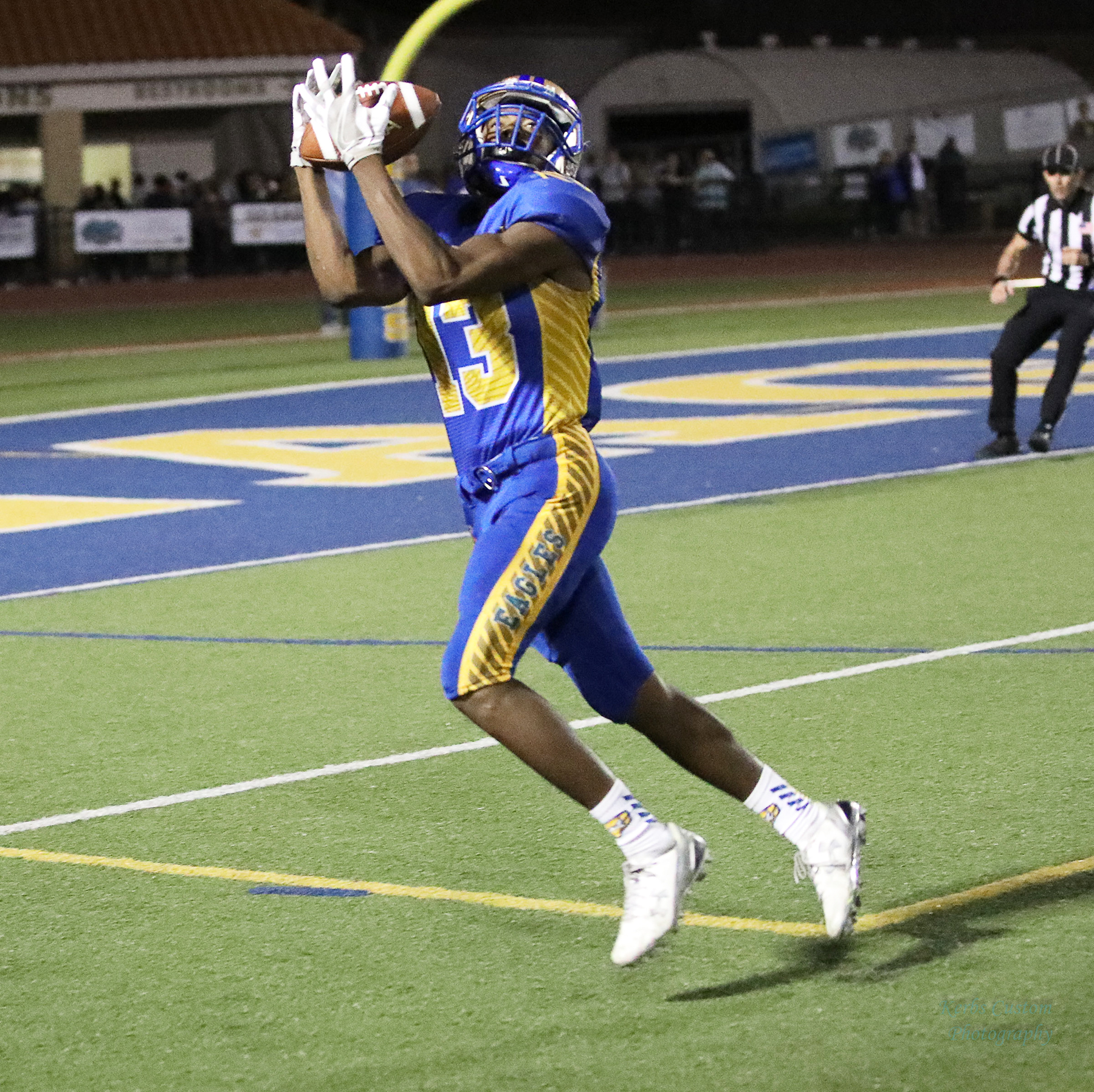 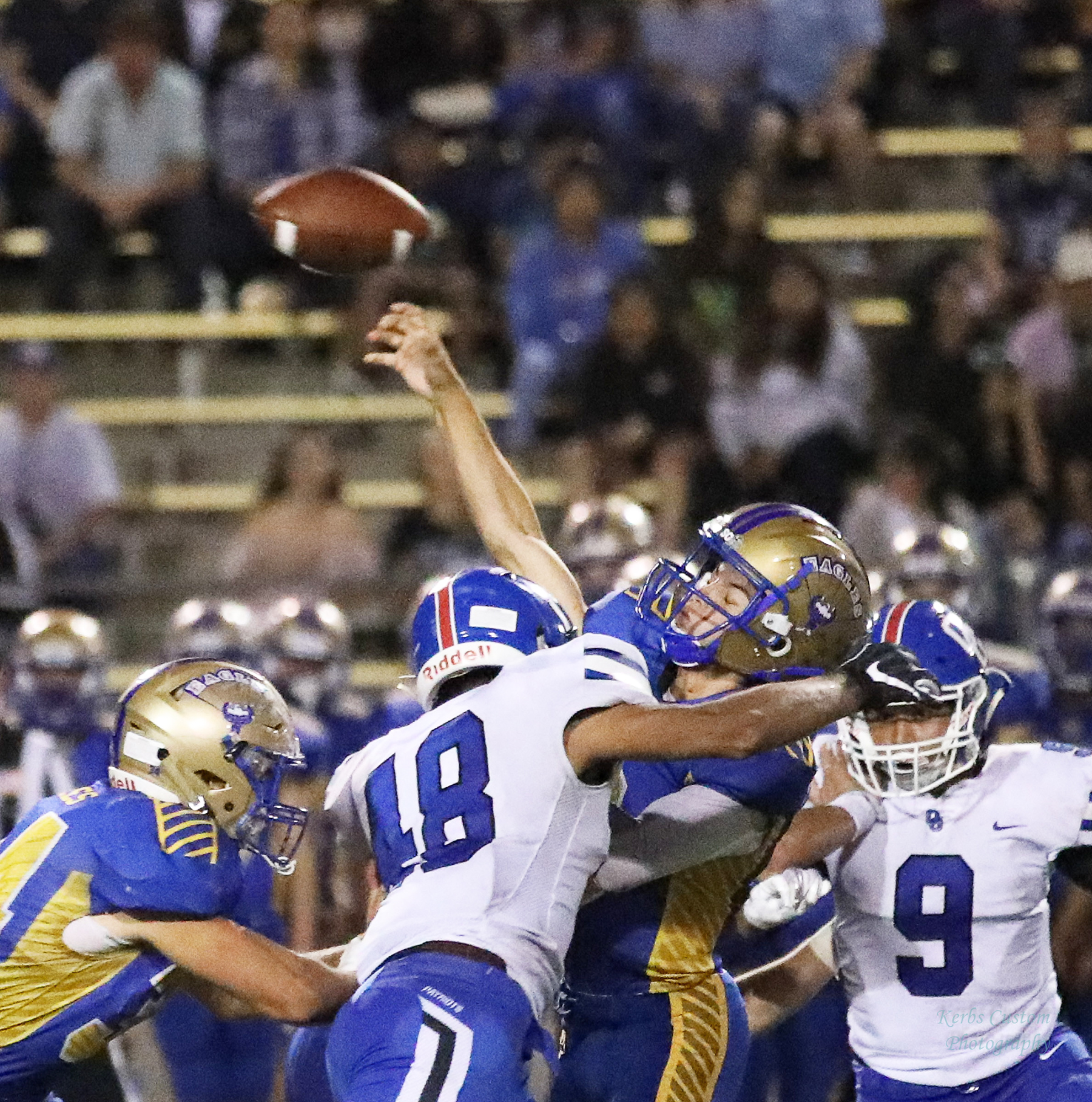 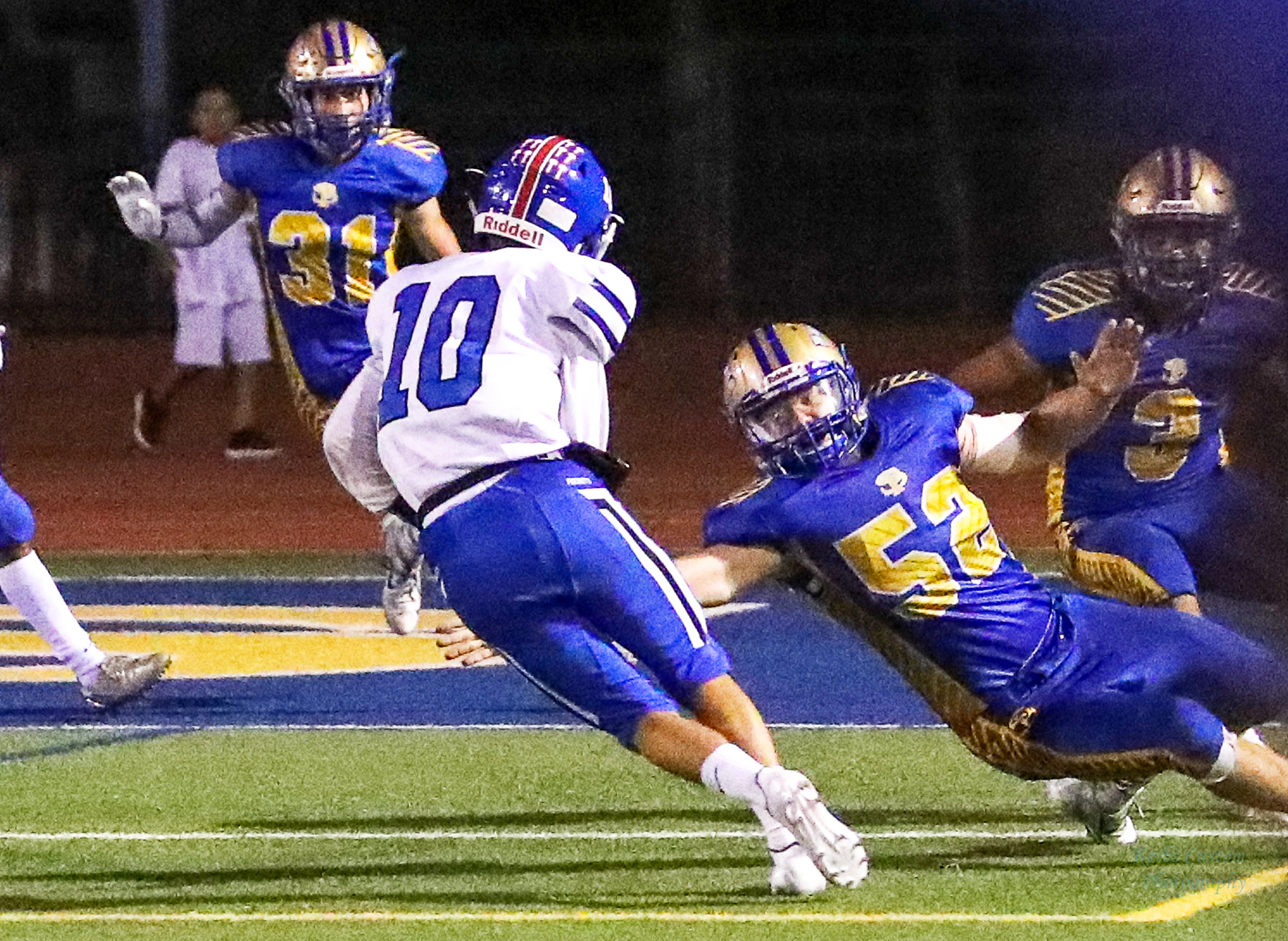 Don’t be misled by a score that on the surface might suggest that the traditional Battle for the Bear game between Orange Glen and San Pasqual last Friday night wasn’t all that close.

In actuality, it was quite the contrary. When drilling down deeper, what you’ll find is that the Patriots (3-1) competed hard, hung tough with the host Golden Eagles (3-2) and showed some real positives despite being on the wrong end of a 37-14 final count.

And it’s fascinating to speculate what might have happened if the Pats hadn’t had a touchdown wiped out by a penalty, if they had converted on a pair of key fourth-down attempts and if a couple of highly questionable calls hadn’t victimized them.

But none of that in any way should detract from an impressive performance that was fashioned by a San Pasqual squad that rebounded sharply from a loss the previous week to the San Diego Section’s No. 1 team, Torrey Pines.

Throughout the night and on both sides of the ball, the Golden Eagles showed plenty. Their quarterback Trevor Jungman was simply outstanding while orchestrating SP’s dangerous option attack. Not only did the junior signal-caller use his nimble feet to rush for 127 yards and two touchdowns but he also wowed many with his passing accuracy, connecting on 6 of 8 throws that went for 150 yards and another pair of scores.

And SP’s defense was stout and formidable, particularly when it needed to be. Defenders such as Connor Henson, Chase Horton, Isai Ramos, Johnny Vega and Ben Lee were constantly bringing it while making plenty of influential plays.

Taking the game’s opening possession, the hosts proved they were ready to go from the outset with a lengthy drive. Thanks in large part to a beautiful 29-yard connection from Jungman to wideout DJ McNeal as well as a nifty 18-yard scamper by the quarterback, SP was knocking on the door. But on a 4th down from the 1, the Pats’ standout linebacker Julien Lesa loomed large when he stuffed running back Mark Santar for no gain that forced a turnover on downs.

But soon after the Golden Eagles’ Vega, himself a ‘backer of high quality, dropped OG’s stellar runner Cael Patterson in the backfield for a safety that staked the hosts to a 2-0 lead at the 6:18 mark of the first quarter.

Immediately, the visitors answered right back with Patterson showcasing his skill for shaking loose of would-be tacklers and speeding to the outside that resulted in huge gains of 22 and 31 yards. And when a determined second effort by Patterson enabled him to find paydirt from 2 yards out, it looked like OG had seized the advantage. But alas, a costly procedure penalty negated the score and to make matters worse, the Pats would eventually come up empty when a subsequent field goal attempt was blocked by Ethan Huffman. This sequence of events definitely had a turning-point feel to it.

As the game moved into the second quarter, the G. Eagles really began to take flight when they scored on three consecutive possessions. First, the on-fire Jungman pitched a perfect 33-yard TD pass to an open Jacob Moore who had done a nice job of getting behind the OG secondary. Then, after deftly rolling to his right, Jungman drilled the athletic McNeal with a 12-yard dart for another score. And finally came the third tally that was set up by a blocked punt by Jason Laurie. The hardnosed Santar eventually did the honors when he powered in from a yard out behind a good surge from the offensive line.

It was at this stage that OG really demonstrated its mettle, resiliency and heart. With just one series left to them before intermission and knowing that it was imperative that they get on the board, the Pats embarked on a clutch 80-yard drive that featured some notable individual efforts.  Patterson helped get things going when he gathered in a screen pass from quarterback Ethan Villalobos and hustled down the left sideline for a sizeable 28-yard pick-up. Next, the mobile Villalobos dodged some heavy traffic and found dependable receiver Christian Gonzalez-Torres for 25 more yards. And then on the very next play, Villalobos arched an accurate 22-yard toss into the left corner of the end zone that was gathered in Moray Steward, a genuine threat whenever he gets his hands on the ball.

But Villalobos wasn’t done. With the Pats electing to go for a two-point conversion, the emerging sophomore delivered a sensational effort when—with defenders all over him—he somehow unloaded a wobbly throw that Gonzalez-Torres managed to snare. Suddenly, the Pats were back in the hunt at 23-8 with just 8.1 seconds showing before halftime.

And things began looking even more promising for OG early in the third quarter when the offense advanced into SP territory before an incomplete pass brought that possession to an end.

However, the Pats really got a huge lift from the defense shortly thereafter when Santar was stopped short on a 4th down at the OG 3 which gave the ball back to the visitors.

Seemingly inspired by what had just occurred, the Patriot “O” then began a long-distance march that featured two timely grabs by Gonzalez-Torres and a pair of productive totes by Patterson that put his assertive running style and knack for getting outside on full display. The second of these runs was a 15-yard sweep to the left that had Patterson striking gold. At this stage, with the tally now at 23-14, the Pats were the ones seemingly with momentum on their side.

Moving onto the final stanza and with the game still very much in doubt, the Pats appeared to have made a pivotal play when active defensive end Carlos Galan registered a big-time sack that would have put the G. Eagles in a difficult down-and-distance situation. But instead  this potential difference-making  tackle for loss was negated by a personal foul call that left the Orange Glen sideline both mystified and venting its frustration. Again here was another crucible moment that dramatically impacted the proceedings.

Given this reprieve, SP took full advantage of the opportunity. The home team would steadily move the ball downfield and on a seventh consecutive rush attempt by the G. Eagles, Jungman expertly executed an option fake and then kept the pigskin for a 7-yard jaunt that had him crossing the goal line. The score now stood at 30-14 with 8:03 remaining in the contest.

And less than four minutes later, SP added the capper when Jungman wrapped up his memorable evening with another nifty option keeper that saw him slip underneath outside containment and with nothing but virgin turf staring him in the face, dash untouched for 40 yards that brought the final count to 37-14.

Though he was disappointed in the outcome, OG coach Jason Patterson saw plenty of positives from his charges. “I was very happy with our effort,” said Patterson. “We came to play and I thought we really hit on defense.”

OG’s coach also had praise for his some of his offensive stalwarts such as C. Patterson (148 rushing yards) and Villalobos (11 for 22, 108 yards). “I though Cael ran hard and Villalobos really competed and gave us good leadership.”

Patterson in particular showed an abundance of grit and resolve. There were more than a few times when SP’s swarming defense greeted him with forceful hits and gave him little room to operate. But to his credit, the gifted junior never backed down, kept plugging away and more than had his moments.

As for SP, in addition to Jungman’s heroics and that of the defense, kudos must be given to receivers McNeal and Moore as well as running backs JT Hoffman and Santar who all made a significant contribution to the Golden Eagles’ cause.

And so, because of a very noteworthy all-round effort, it was the well-coached squad of Tony Corley that was able to walk off the field with the prized Battle of the Bear trophy. “San Pasqual does a really good job,” saluted Patterson. “They’re very sound, they’re physical upfront and they’re very tough on the run.”

Meanwhile, even in defeat, OG continued to show that it’s definitely pointing in the right direction and that the immediate future seems quite bright. Based on what they demonstrated on Friday, both these teams figure to make much more noise as the season progresses.