Pats believe fine season could have been even better 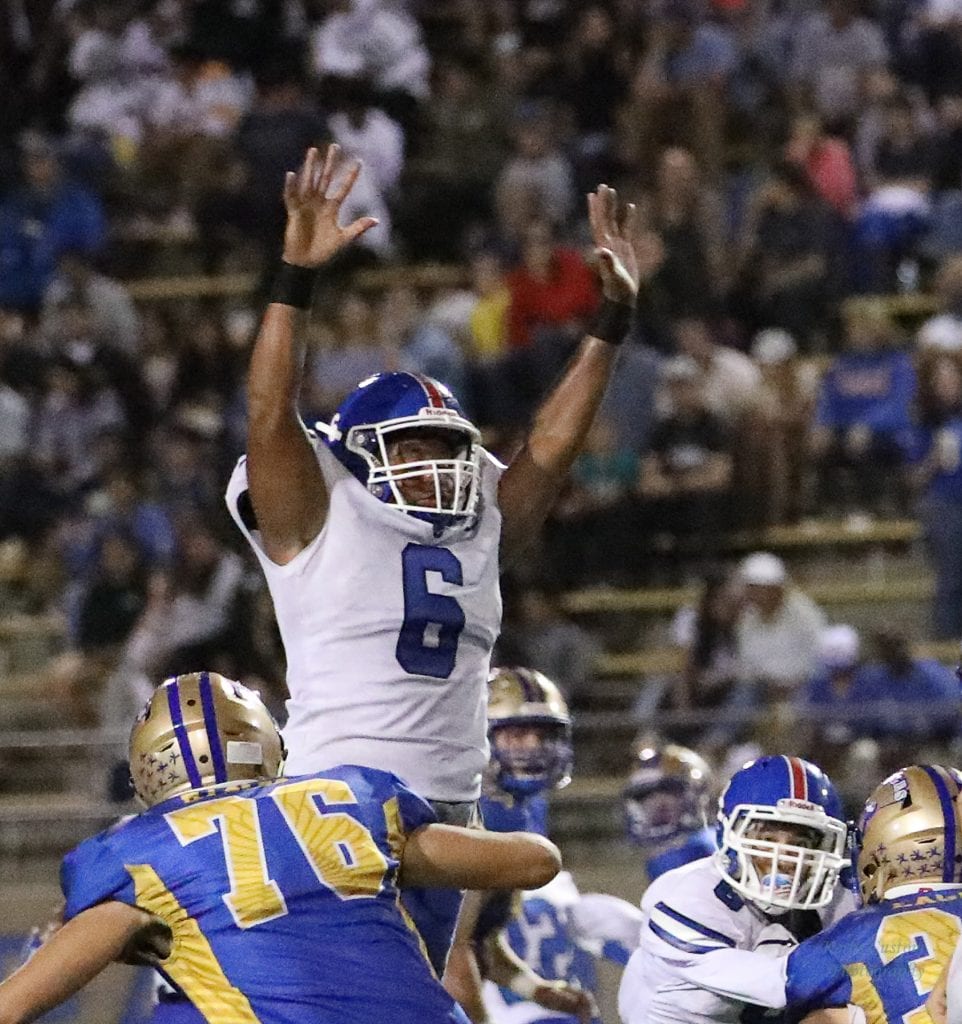 Linebacker supreme Julien Lesa was a standout once again in OG’s season ending loss to Santana. Photo by Lenny Kerbs

When asked to assess the just concluded season of his Orange Glen Patriots (7-5), head coach Jason Patterson had plenty to expound upon.

“Hey, there were some definite ups and downs,” Patterson began. “Things didn’t always go our way. But on balance, there was a lot of good that happened. The trip to Hawaii (Waimea) was incredible, we finished second in the (Coastal) league, beat Santa Fe Christian for the first time, won five games in a row and got to the semifinals of the Division IV playoff. Really, that’s not bad.”

Indeed, not bad at all, and yet there was a wistfulness in his voice about how the 2019 campaign ended with a 35-14 loss to No. 1 seed Santana last Friday night. Though certainly giving the host Sultans plenty of credit for getting the job done, he nonetheless felt that the Pats hadn’t taken advantage of a bona fide opportunity to win that contest. Had they done so, they would have competed for a second straight San Diego Section title. “That loss was disappointing because we had a good chance but things kind of got away from us,” Patterson said.

It didn’t help matters that early on a controversial personal foul against OG proved highly damaging or that the Sultans scored a touchdown when an obvious motion penalty should have wiped out the score. Nonetheless, Patterson was the first to acknowledge that his charges just couldn’t completely put it together when push came to shove. “It seemed that whenever we needed to make a really big play on either the defensive or offensive side, we just didn’t quite get it.”

Give OG lots of kudos for being aggressive and playing to win. Not only did they open up with an onside kick – which should have been recovered – but they went for it on multiple occasions when facing a fourth down. In no way, were the Pats not going for it.

And midway through the first quarter, the Patriots jumped on top when their celebrated runner Cael Patterson cashed in from short yardage. Again demonstrating their desire to shoot the works, the Pats attempted a two-point conversion but it failed and their lead remained at 6-0.

It was then that slinging Sultan quarterback Nathan Temple began exerting his considerable influence by tossing for a bevy of scores. By well into the third quarter, the Sultans had scored four straight touchdowns, all on pitches from Temple who ended up with 233 passing yards. And just like that the spread between the two teams had grown to 22 points.

But the Pats breathed some life into a possible comeback bid when QB Ethan Villalobos arched a spiral down the left sideline that caught DJ Harris in full flight and resulted in a 38-yard scoring connection. Though the coverage was airtight, Harris displayed superlative concentration as he looked the ball into his hands and then sped towards the end zone. And when Patterson tacked on a conversion run, the margin was back to within a workable 14.

And so entering the last stanza, the Pats were still within striking distance. But two unsuccessful fourth-down tries – the first off a fake punt and the second coming with approximately five minutes left – all but sealed OG’s fate and basically wrapped matters up.

A window dressing tally came late in the contest when Santana’s talented running back Brooks Moutaw (141 yards) rambled for a 38-yard TD tote that ran the final count to 35-14.

Understandably, there were plenty of long faces being worn by a number of Pats as both their impressive winning streak and laudable season came to an end. But coach Patterson readily sang the praises of a squad that consistently manifested a dogged mentality. “The guys worked hard and they played hard,” he said. “They had a great attitude and they never quit. They also displayed a team mentality that showed that they truly were playing for one another.”

With the loss, the prep career of two generational players comes to an end, barring participation in some sort of all-star game.

Absolutely nothing more needs to been written or said about the wonders and remarkable staying power of Patterson, who finishes his OG tenure with a staggering 5,655 yards and 64 TDs on the ground. That is the kind of production that not only boggles the mind but suggests a player of incomparable skills.

Amazingly, linebacker Julien Lesa is of the very same stature. In his swansong as a Pat, the decorated hard hitter posted glossy numbers including 16 total tackles, two of which resulted in a loss. With an insatiable drive, keen instincts and a conspicuous IT Factor that is undeniable, Lesa not only looks the part but he plays it to maximum effect. If there are other dominant defenders in the North County that can match Lesa’s impact and mystique, they are few and far between.

And there are other departing seniors who made indelible marks and leave an enviable legacy. In big tackle Danny Luna, the Pats not only had a class act but a committed captain who was the undisputed anchor of an accomplished offensive line.

In the dangerous Harris, the passing game had an explosive weapon who could stretch the field, log a passel of receiving yards (1,005) and garner plenty of touchdowns (10).

H-back Chris Adams was a terrific blocker who contributed as both a ballcarrier and receiver. Moreover, Adams was a gridder who got noticeably better with each succeeding week.

On the defensive side of the ledger, end Mason Boulais went out with a bang as he recorded 6 tackles, a sack, a hurry and a forced fumble against the Sultans. A reliable performer, Boulais was commitment personified and the essence of a hard worker.

Finally, outside linebacker Derrick McCullough and smooth safety D’Vante Wheeler could always be counted upon to make their presence felt and manufacture more than their share of timely plays.

So now the book closes on the 2019 Orange Glen football season. In many tangible ways, it was a memorable year. But the Pats will also recall that with a slightly different set of circumstances versus Santana, it might have even been better.