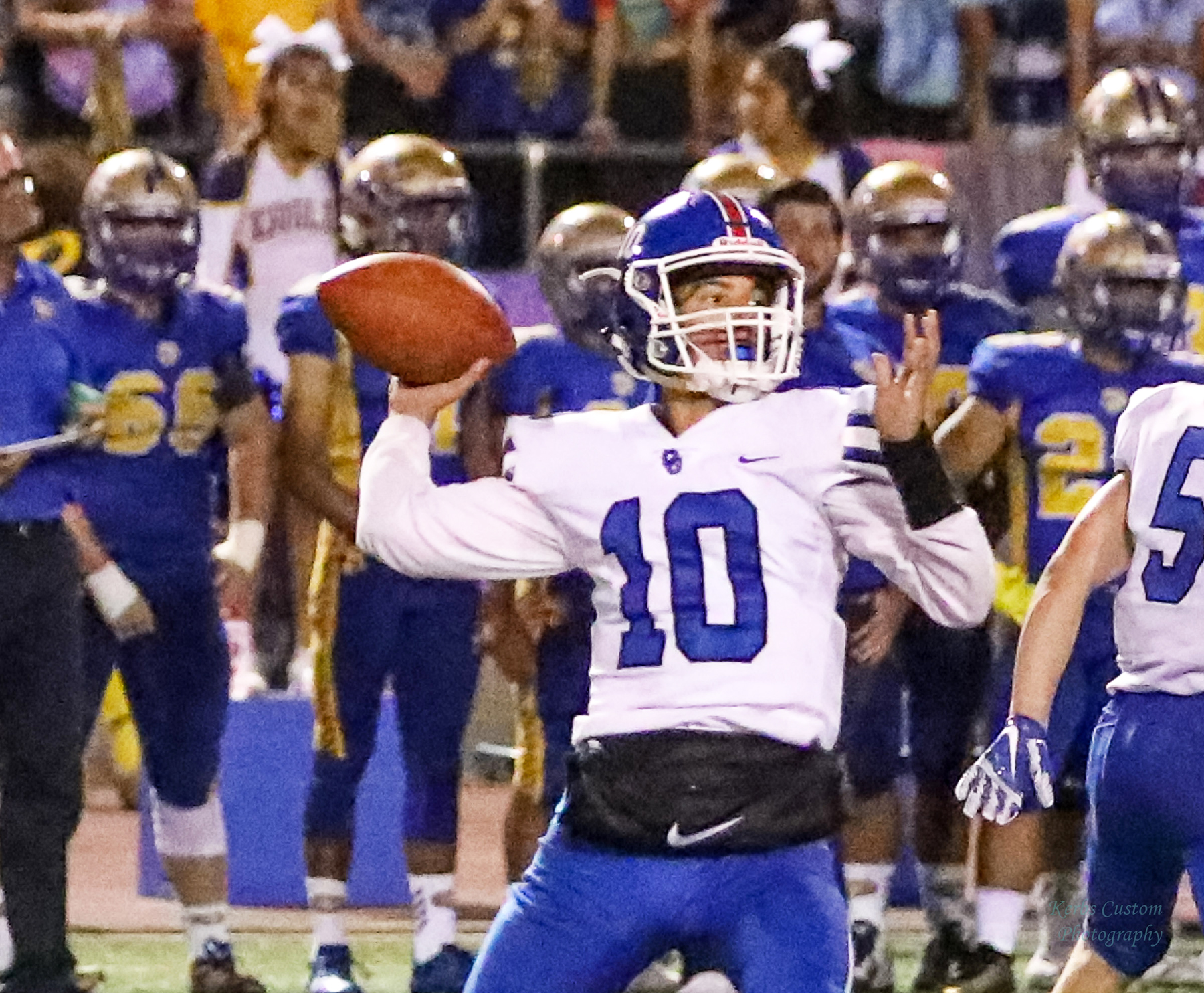 For the remarkable Orange Glen High football team that has wildly exceeded expectations, it’s onto a destination that very few outside the program could have ever envisioned – namely the Division 6-A State Championship.

The Patriots’ (10-3) amazing run through the playoffs has left more than a few prep insiders/aficionados asking themselves, “Who are these guys and who would have thunk it?”

But here we sit with the odds-defying Pats primed to head some 493 miles north to San Francisco for a December 15 afternoon contest with the Lincoln Mustangs (12-0) that will determine who will capture a highly coveted crown and be deemed California’s best.

Coach Jason Patterson’s resourceful crew punched its ticket to the ultimate game with a stirring  22-14 Southern California Regional win over L.A.’s athletic Locke High (10-5) last Saturday night on the victor’s home field.  In a game in which their mettle was sorely tested and a number of clutch plays were absolutely required, the Pats dug down deep and delivered when it mattered most.

Keying the OG triumph were impactful performances on both sides the ball. Offensively, the Pats were the beneficiaries of a pair of touchdown runs by the relentless Cael Patterson and timely heroics from sophomore QB Ethan Villalobos. Meanwhile, a defense that grew in stature as the night wore on and made massive plays at critical junctures was ignited by yet another spectacular effort by their undisputed leader, linebacker Julien Lesa. With those mentioned above and a host of other teammates rising to the occasion, the Pats ultimately proved to be too much for the visiting Saints.

When asked about what made the difference in this taut affair, coach Patterson had an immediate explanation. “It all came down to us making a lot of big plays and then being able to limit theirs,” he said. “And of course, our belief in each other was also a huge factor.”

The contest’s most pivotal moments occurred late in the fourth quarter with the game deadlocked at 14 apiece. A crucial 46-yard punt by sophomore Nathan Kells helped push the Saints back to their own 26-yard line. And then on the very next play, Locke’s signalcaller Mikel Beime was pressured and while trying to escape to his right, he was tracked down by OG’s dynamite lineman Carlos Galan—who not only sacked Beime but caused him to fumble. In an instant, talented soph Damien Gainey alertly scooped up the pigskin and advanced it to down to the opponent’s 9-yard line.

Now with momentum riding with them, the Pats quickly capitalized when C. Patterson burst off the right side, encountered some resistance but simply refused to be denied before he hit paydirt. And when a pair of offside calls against the Saints moved the ball even closer on the PAT attempt, the Pats elected to go for two and were rewarded when Patterson again took a hard shot but another determined effort carried him into the end zone and staked OG to a 22-14 margin with just 2:05 remaining.

It was more than fitting that the defense that forced the game-changing turnover should do the honors of wrapping things up. With time now a precious commodity, Beime was forced to go up top but thanks to good coverage by Patriot DBs Tristen Smith and Dylan Ewing-Villalobos, three straight passes fell incomplete. Then it was left to active linebacker Ruben Ramirez to deliver the knockout blow when he swarmed over Beime with a sack that ended all doubt about the outcome.

However, the game concluded on a rather unfortunate note. With the Pats assuming a victory formation, Villalobos took a knee for the third straight down and that should have been the end of it. But with their frustration and a lack of discipline boiling over, a couple of Saint players engaged in some unnecessary extracurricular shoving and pushing that soon spread to other participants. For a scary moment, it appeared as if matters might escalate into something very serious. Fortunately, cooler heads prevailed and a potential skirmish/brawl was averted but there was no excusing Locke’s behavior. The Saints were clearly out of line although  Patterson graciously cut them some slack. “It was a disappointing and tough loss for them,” he said. “They’re a passionate football team and I think things just got emotional at that point.”

Speaking of emotion, the Pats got an energizing jolt of it early in the first quarter when Lesa expertly dropped in coverage, read Beime like a book and intercepted a toss before returning it some 12 yards. From there, C. Patterson took over when he jumped through a gaping hole, spotted plenty of room to the left and motored his way to a 15-yard TD jaunt that allowed the hosts to draw first blood. 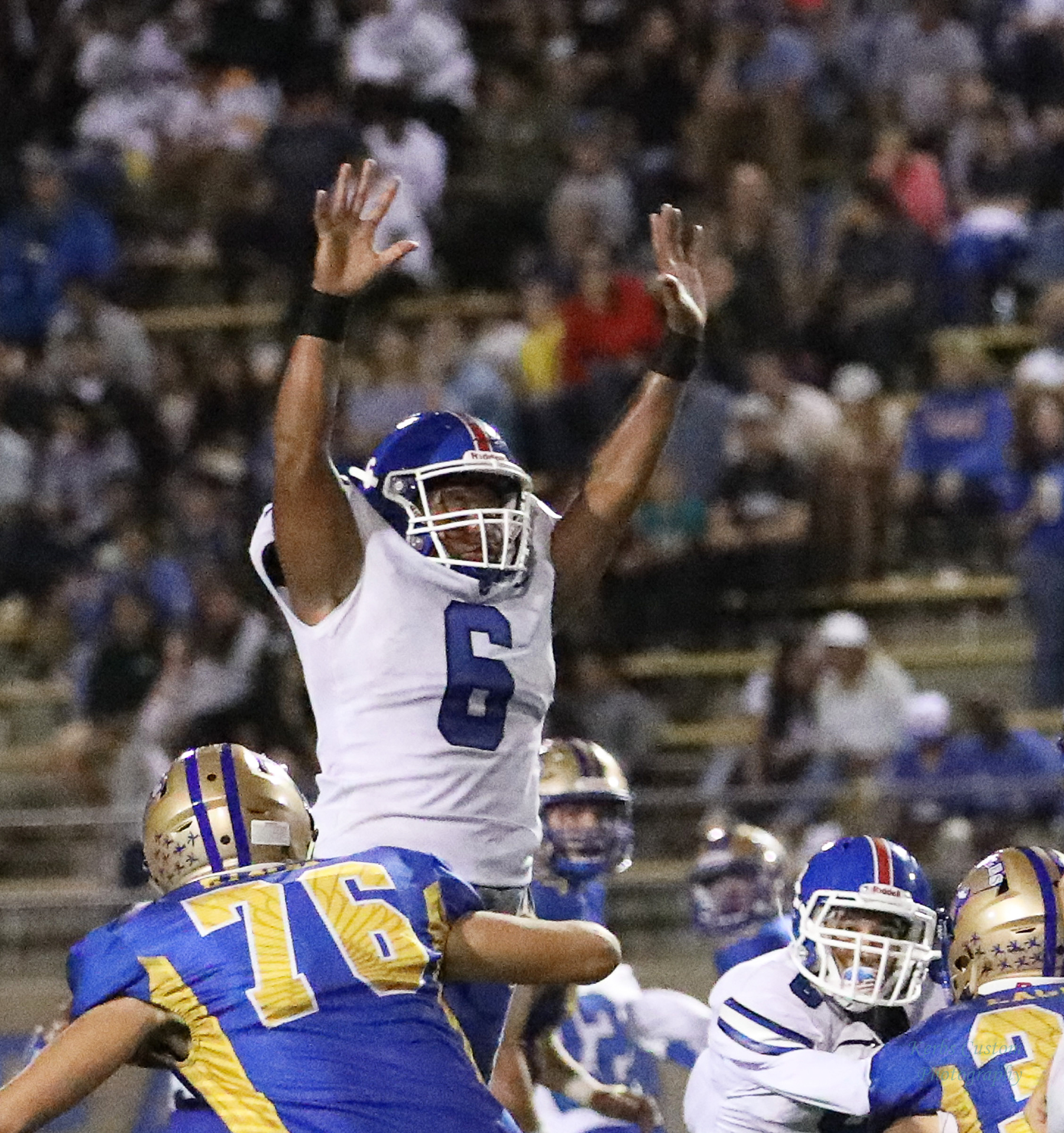 Linebacker supreme Julien Lesa (shown here in action against San Pasqual) once again rose to great heights with a dominant performance in OG’s 22-14 win over Locke. Photo by Lenny Kerbs

But on their third possession of the game, the Saints answered back in lighting-like fashion courtesy of a 71-yard bomb from the versatile Ja’Quez Harvey to HB Trayvon Ford, who got behind the Pats secondary and exhibited some fancy footwork before he was finally stopped along the near sideline. That left it for Beime to loft a jump ball into the end zone that the 6-3 Harvey neatly high-pointed and grabbed for a 14-yard scoring reception that helped even the count at 7-7 going into halftime.

That’s the way matters stood until well into the third stanza when Locke seized the lead thanks to a six-play advance that was highlighted by a 21-yard TD connection from Beime to the fluid Jerome Cooper; who deftly got inside position while slanting across the middle.

With the action having moved into the final quarter and the Pats still trailing by seven, there was a real sense the locals needed their offense to step up and provide a lift. Fortunately, that’s exactly how things played out when OG maneuvered some 52 yards to forge a tie.

Without question, the defining play occurred when—on a do-or-die fourth down—a composed Villalobos rolled to his right and fired a spiral to youthful wideout Fayez Eyabi, who showed splendid concentration on this super-clutch 21-yard hookup. Moments later, Villalobos continued to deliver when he authored a nice fake that froze the Saint defenders, took off on a keeper around the left side and sped untouched into the end zone from nine yards out.

Villalobos’s beautifully executed scamper had the dual effect of not only revving up the OG crowd but also setting the stage for the Pats’ late game dramatics.

In a victory that will go down as one of the most memorable in school history, the defense occupied center stage, holding the dangerous Saints’ attack to a mere 87 yards rushing (27 attempts) and just 116 through the year.

As usual, Lesa was the chief instigator with yet another phenomenal performance that featured 10 tackles, a sack, a pick, a fumble recovery, numerous key stops and punt coverage that was off the charts.

But there were plenty of other stout defenders making vital contributions. Among Ramirez’s six tackles were a hefty three sacks. Christian Gonzalez-Torres was a genuine factor with six solo stops and a tackle for loss. In addition to his monumental strip sack, Galan got in on five tackles as did Gainey, who played beyond his years with a sack and the game-changing fumble recovery. On the back end, Smith racked up six tackles while his close coverage as the game wound down was highly influential.

Offensively, it didn’t come easy for C. Patterson against a Saints scheme that was devised specifically to stymie him. But he delivered a gutsy effort that culminated with 125 rushing yards and two telling scores. And though his numbers were modest, Villalobos was a bona fide playmaker when things reached critical mass.

Finally,  a shout-out must go to the punter Kells, who averaged 38 yards on seven kicks and was a big reason why OG was able to hang tough in the battle for field position.

So now it’s on to the City by the Bay and a possible date with destiny. Can these remarkable Pats possibly rise from the trials of a one-win season in 2017 to reach the very summit of a state title the very next year?

It all seems so unlikely, so far-fetched, but thanks to a staff that has coached its ass off and a group of young athletes that coupled their genuine physical skills with an undying belief that they could get it done, the Pats are on the verge of writing the ultimate comeback story. Indeed, who would have ever thunk it?