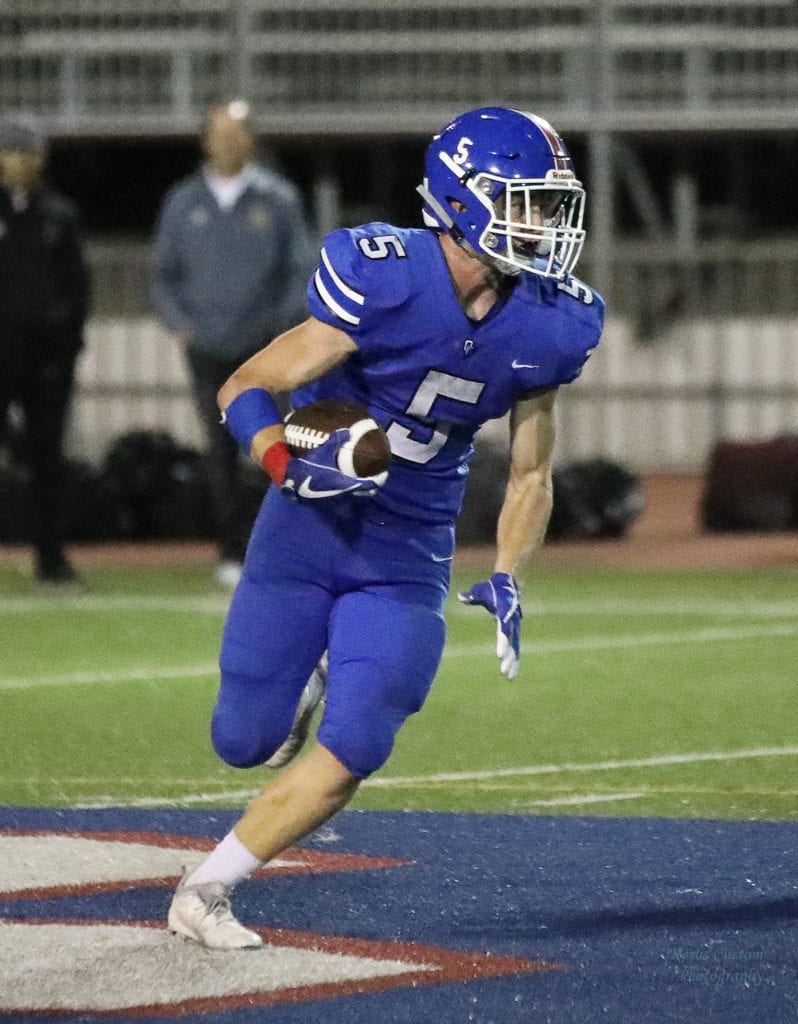 To no one’s surprise, OG’s deluxe running back Cael Patterson was a lethal weapon on the ground while gaining 285 yards and scoring thrice in the Patriots’ 52-28 playoff win over Patrick Henry. Photo by Lenny Kerbs

Last Friday night while the Orange Glen Patriots continued to demonstrate their postseason chops, the Cougars of Escondido weren’t able to follow suit.

For these two locally based squads, it was a case of one of them advancing and keeping their title hopes alive while the other saw its building-block season come to an end.

Now for the details, starting with the victorious Pats.

Host Orange Glen came into its San Diego Section Division IV quarterfinal matchup with Patrick Henry occupying a mighty good place. Having earned a first-round bye thanks to a No. 4 seeding, the Pats were rested and refreshed. Moreover, OG was a team riding a real wave of momentum having won four straight games in which it had scored over 40 points in three of those outings.

And if the Patriots required a reminder of what they were capable of achieving, all the team needed to do was harken back to its incredible run to the state championship finals in 2018.

So all signs were trending positively for coach Jason Patterson and crew. And to say that the Pats lived up to expectations would be an understatement. Simply put, they dropped a bomb on PH.

Putting up 30 points by halftime, the Pats took control of matters early in the second quarter and never looked back while rolling to a decisive 52-28 triumph.

By virtue of another playoff success, the Pats (7-4) will now trek 32 miles south to meet up with the ultimate challenge in top-seeded Santana (10-1) tomorrow evening.

It is absolutely no secret that as stalwart seniors Cael Patterson and Julien Lesa go, so go the Pats. And as is usually the case, the aforementioned duo was at its dominating best against PH.

The stamina-driven and relentless Patterson was a beast, gaining a staggering 285 yards while scoring on three short touchdown runs. The longest jaunt that he broke off went for 43 yards. Because of Patterson’s impressive efforts and the crackerjack work done upfront by the offensive line, the Pats controlled the tempo and flow of the game throughout much of the proceedings.

And though Patterson was the ringleader, he also got considerable offensive help from his versatile quarterback Ethan Villalobos, who showed up in a big way while passing for 147 yards and tossing for three TD strikes. On the receiving end of Villalobos’s scoring throws were DJ Harris, Nathan Kells and Travis Ehman.

As good as Patterson had been, his counterpart Lesa was equally as impactful. The hard-hitting linebacker was all over the field while making an astounding 17 solo tackles, causing a fumble and registering a tackle for loss. It almost seemed as if Lesa had become a human Pac-Man the way he was gobbling up enemy ballcarriers.

But no one can do it alone and Lesa got great support from reliable defensive back Dylan Ewing-Villalobos who coupled his five tackles with a fumble recovery and a tackle for loss. And then there was the active trio of D’Vante Wheeler, Eduardo Lopez and Mason Boulais (TFL) who combined to make 22 stops.

So now it’s on to a semifinal tilt with Santana and a great chance for the Pats to burnish their recent playoff resume even further. But to do that, they’ll have to get by a talented Sultan squad (10-1) that took out their neighbor Escondido.

Through the first quarter, the Cougars were right there with the Sultans, having twice come from behind to knot the score at 14-14. But then, Santana would reel off four consecutive scores – including a rushing touchdown from Brooks Moutaw and a scoring pitch courtesy of QB Nathan Temple – that created plenty of separation en route to its 40-28 victory.

But even in defeat, Cougar signal caller Robbie Ramos did himself proud with a notable performance in which he showed no quit. Showcasing his undeniably powerful arm, Ramos threw for 236 yards and thrice delivered on accurate payoff passes.

On the first, the versatile Matt Malone raced past a defender before hauling in a perfect Ramos pitch that wound up being a 70-yard TD connection. The next passing tally came when senior wideout Victor Seneres ran an out pattern and then made a diving grab of a well thrown Ramos aerial. The final touchdown heave occurred late in the going when receiver Dominic Torres reached high, made a nice stretching grab and then stiff-armed a would-be tackler before reaching the end zone.

Among other factors, turnovers proved to a telling factor in this contest with the Cougs being undermined by a pick-six and a fumble while the efficient Sultans played error free.

Regardless of the loss, however, 2019 must be considered a successful season for the Cougars who ended up with a 6-6 overall mark. To begin with, Bordman’s crew demonstrated real progress by upping their win total by three over the previous campaign. In addition, Esco also proved to be a legitimate factor in the Valley League with a solid third-place finish.

Add to those positives the fact that with their convincing victory over nearby Classical Academy, the Cougs notched their first playoff victory in a decade.

With interest in the program growing noticeably and many more prospective gridders anxious to turn out, the Cougars seem on the verge of a true football revival. Under Bordman’s steady hand, Esco looks to have a future that is not only promising but one that could last.

But for now, the Cougs will have to direct their attention to next year while the Pats are still very much focused on the present.

Last week, a deep Santana team ended the dreams of one Escondido football team. The looming question now is can they do it to another? Orange Glen hopes to provide an answer in the negative.