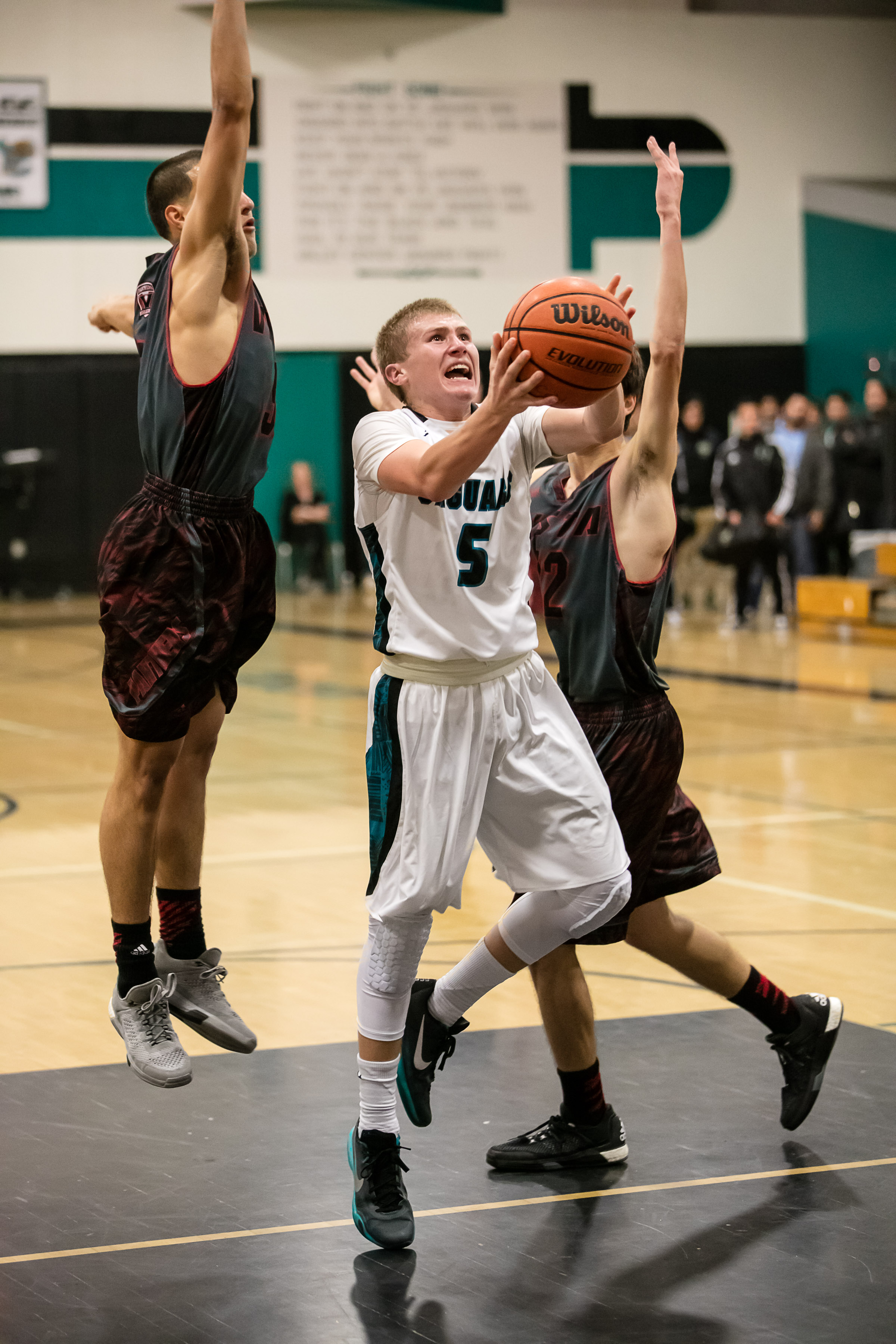 Terrence Becvar, shown here earlier in the year, combined with Jacob Andreas to keep the Jags afloat against the Patriots.

In a Wednesday night game that featured a riveting finish, Orange Glen guard Michael Diaz calmly dropped in a pair of free throws with 0.9 left that spelled the difference in a 64-62 Patriot victory over host Valley Center.

The game had huge ramifications in the Valley League standings and for possible playoff seeding for both teams. This crucial triumph enabled the Pats (15-11 overall) to seize control of second place in the VL with a record of 6-3 while the heartbreaking loss dropped the Jags (16-11) into a third place tie at 4-5.

For most of the game, the visitors controlled tempo, were quicker to the ball and made it tough for Jags get into much of a rhythm. At halftime, the Pats had established a 40-28 lead which would have been even more substantial if not for the amazing heroics of guard Jacob Andreas, who wowed the crowd by scoring 20 points and draining four treys before intermission.

Early in the third quarter, the Pats extended their lead to 13 and seemed on the verge of perhaps running away with things before Andreas produced more of his magic by tallying eight straight Jags points that got VC closer and within striking distance.

An interesting factoid about VC’s offensive output was that it was midway through the third stanza before someone else besides Andreas or hustling guard Terrence Becvar managed to score a bucket. VC’s dynamic duo had incredibly been responsible for VC’s first 37 points. It wasn’t until forward Trent Reilly took a beautiful feed from Becvar and laid it in that this rather dubious streak was broken.

But the Jags never lost their will and kept grinding and chipping away until a Becvar three that appeared to come from downtown San Diego, knotted the count at 55-55. VC hadn’t been that close since they arrived at the gym.

A magnificent length of the court drive and subsequent hoop by quicksilver Pat guard Damien Miller got the OG back on top at 62-58. But the Jags quickly countered on a Joe Stehly layup and then Becvar and T.Reilly collaborated for another sweet dish and layup.

The Jags had a chance to go ahead late but poor execution, with guys just standing around and Andreas holding onto the ball way too long, resulted in a shot clock violation.

The Pats then managed to advance the ball into the frontcourt before calling timeout. And off the inbounds play, Diaz deftly created some space and drew a foul as he attempted a left-handed shot from in close. He knocked down the deciding two charity tosses with relative easy.

And yet, with less than a second remaining, Becvar nearly brought the house down by unloading a lunging 52-foot shot that grazed the front of the rim before bouncing harmlessly away.

One of the main reasons that OG came out on top was because of its balanced scoring. The main catalyst was smooth operator Diaz, who wound up with 16 points but he had plenty of help. Nikola Kresovich added a timely 14 while Trevor Owens and Miller were key factors with 13 and 12 apiece. Miller’s impact was also felt in other areas as he snared seven rebounds while doling out the same number of assists.

Andreas finished his monster night with 31 points while Becvar made his presence felt with 18.

The Jags will close out their regular season with a trip to Mission Vista on Friday night while the Pats will also be on the road, taking on a sizzling Ramona squad that has won 13 straight and is undefeated in league play.