Patio’s “Greetings” is a holiday treat with a trick 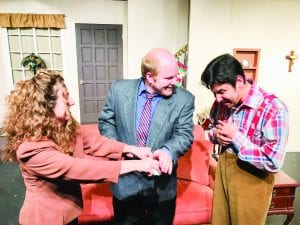 Cast members of the Patio Playhouse production of “Greetings.”

All good drama is based on conflict, with a little bit of surprise thrown in.  For Christmas, a smidgen of magic and faith is also not unwelcome—like an extra helping of eggnog.

Patio Playhouse’s production of “Greetings!” meets those criteria in spades. What could be more designed to spark conflict than a 30ish man, Andy (played by Chris Braden) bringing a Jewish atheist fiancée home to Pittsburgh to meet his Catholic parents and his brother, who apparently has severe developmental disabilities, so that he can rarely say anything more than “Oh boy!” and “Wow!” until, on Christmas Eve, he starts saying something new? And then a lot of new things.

It’s all very magical, although the author, Tom Dudzick, who has been called the “Catholic” Neil Simon, does his best to allow for different reactions from the different characters, including the atheist girlfriend, Randi, played by Tami O’Connell, who doesn’t know how to deal with things that simply cannot be explained by her atheist worldview.  I’ve always thought that atheism is actually a form of religion because its adherents often cling to their belief system with a fervor that would be called “faith” if a religious person exhibited it.  Randi displays that kind of atheism, doing her level best to explain phenomena that otherwise logic would require being attributed to a giant practical joke, with everybody she knows in on the joke.

One of the best performances comes from Rick Hill as Andy’s dad Phil Gorski, the sort of curmudgeon in whom the milk of human warmth and kindness turned rancid ages ago. He’s still got his religious fervor, quite enough to be thoroughly outraged when his son and Randi reveal that they are to be married, and that Randi, well, bad enough that she’s Jewish, but . . . !

His long-suffering wife, Emily, played with utter sweetness by Susan Guffy, has, like her husband, kept her faith, but unlike him, hasn’t turned mean. When her developmentally challenged son, Mickey, starts to say things that he shouldn’t be able to say, she accepts it. And then it becomes impossible for anyone else to ignore.

And then there is Mickey, played by John Carroll. This is a fine acting job that is doubly challenging and doubly engaging.

Although not as tradition holiday offering, “Greetings!” will leave you feeling as warm as a cup of hot chocolate on Christmas Eve.

“Greetings!” runs at Patio Playhouse through December 17. Friday and Saturday evening performances are at 8 p.m. with afternoon performances on Sundays at 2 p.m.

Tickets: All shows will be presented at Patio Playhouse, located at 116 South Kalmia Street, Escondido (between Vinz Wine Bar and Continental Deli). Tickets for this production are available for the cost of $18 for Adults, $15 for Seniors/Students/Military, and $10 for Youth 16 and under. Group rates are available for groups of 10 or more.

For reservations, contact the Patio Playhouse box office at 760-746-6669, email, or via the website at www.patioplayhouse.com. Directed by Patricia Moran Collins. Produced by Deborah Ann Zimmer.