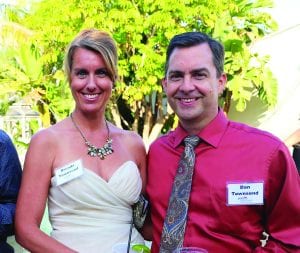 The Patio Playhouse Community and Youth Theater’s Director of Youth Theater Brenda Townsend has been named Grand Marshal of the 67th annual Jaycees Christmas Parade in Escondido. Besides directing the youth theater, Townsend is also vice president of Patio.

Although a new face in the parade, Townsend is one fully integrated with the Escondido community. Her participation in part celebrates the 50th anniversary of Patio, which was originally founded in the heart of Escondido.

Known for presenting a full season of entertaining, varied performances, including musicals, adult dramas and comedies, and a unique fee-free youth theater model which introduces live theatre to children through performance/crew opportunities and school performances each year, Patio Playhouse’s performances take place in both the intimate theater space on Kalmia and Grand, as well as on-stage at Kit Carson Amphitheater during the summer.

According to a spokesman for Patio: “The Patio Board of Directors is thrilled to honor this year’s parade Grand Marshal Brenda Townsend. Brenda is not only currently the 1st Vice President at Patio Playhouse, but has actually been involved with the theater since she was a youth herself.”

These days, both Brenda and her husband Dan Townsend are active members of the all-volunteer board of directors at the theater. Their daughter, Paige, is also a performer who has appeared in a variety of theater productions.

Townsend’s involvement at Patio Playhouse does not end with her vice presidency. In addition to serving on and chairing multiple committees and heading Community Outreach initiatives for the 501(c)(3) non-profit theater, she has also served on the production team for countless shows. Perhaps most notably, Townsend heads Patio Playhouse’s youth theater program, which provides opportunities for youth to get involved both in front of and behind the curtain at absolutely no charge whatsoever to their families.

Townsend will be joined in the parade by other members of the Patio Playhouse team. The parade, which is styled to meet the “Christmas at the Cinema” theme, will begin promptly at 9:30 am. The Patio Playhouse board encourages all parade attendees to consider grabbing tickets to the holiday production of “Greetings!” running at the playhouse through December 17, visit www.patioplayhouse.com or find them on social media.

The 67th Annual Escondido Jaycees Christmas Parade will be held Saturday December 9, 2017 at 9:30am.