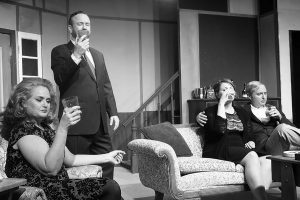 In Edward Albee’s classic “Who’s Afraid of Virginia Woolf” a middle-aged couple spend an early morning after a university faculty party tearing each other to shreds emotionally in front of a younger couple who are dragged into their mutual hate-fest much against their will, only to end up joining in pretty enthusiastically. It was one of the feel-bad classics of the late 20th century. This is definitely what the Greeks had in mind when they envisioned drama as a “catharsis.”

As part of its 50th anniversary season, the Patio Playhouse is putting on “Who’s Afraid of Virginia Woolf,” a play (and later movie that won Elizabeth Taylor an Oscar) that was considered highly controversial and edgy for the time, and still is pretty riveting, especially when brought together by as talented a quartet of actors that director Brent Stringfield has assembled. And let me emphasize: These guys are good!

If you love an evening of people ripping off each other’s flesh down to the bone and beyond; if you savor fights that leave characters one step removed from suicide—or murder—than this is your tea and crumpets, or maybe poison and poinsettias. As the Patio Playhouse advises just as the show begins, “We won’t ask you to sit back and enjoy the evening, because it’s not that kind of a show” or words to that effect. Or as the playbill advertises ‘You are cordially invited to George and Martha’s for an evening of fun and games.” By all means take your wife to see it for Mother’s Day.

George, brilliantly played by Brian P. Evans, is an associate history professor at a small university who has been married to the university president’s daughter for 24 years and whose resentment of how this has prevented him from spreading his wings is so thick and putrid you can cut it with a slicing remark, of which there are many.  For her part his wife, Martha, six years his senior,  is played with exquisite malevolence by Kelli Harless. She resents the fact that he has never stood up for himself to her father, and is contemptuous of him for the very things he resents in himself.

I consider it the highest praise that Harless captures Taylor’s performance without mimicking it—and gives it her own twist-of-the knife dipped in rat poison flair.

The play begins when they have invited a younger couple over for drinks. And drinks. And drinks. The younger professor, Nick, played by Clayton Gage, is a biologist, which George resents and mocks, and his wife, Honey, played by Laurissa Rudgers, is a sweet young thing who no one would ever say a mean thing about. Yeah, right!

The play was written in the 1960s and Stringfield has wisely chosen not to update it to the modern day. Its sensibilities are obviously from the time of “Mad Men,” including the social dominance of men, which makes the battle between the sexes so much more biting.

If I have any criticism of this production, it’s a small one: that one of the actors is described as possessing a certain physical characteristic the actor clearly does not possess. Like John Goodman being cast as Cassius (who has a “lean and hungry” look.)

Patio’s production is three acts of knockdown, drag out tearing each other’s deepest, darkest secrets out by the fingers nails and dousing the rawness with rubbing alcohol. Oh, yes, there’s lots of alcohol in this play! Just about every time you blink an eye, someone is fixing someone a drink. Amazingly, given the fierce verbal jousting going on, no one gets a glass of it thrown in his or her face. But that’s just about the only boundary that isn’t crossed.

Because the production is set in Patio’s intimate setting, you’re going to get every nuance of viciousness. Enjoy every minute of it. I know I did.

Tickets: All shows will be presented at Patio Playhouse, located at 116 South Kalmia Street, Escondido (between Vinz Wine Bar and Continental Deli).  Tickets for this production are available for the cost of $18 for Adults, $15 for Seniors/Students/Military, and $10 for Youth 16 and under. Group rates are available for groups of 10 or more.

For reservations, contact the Patio Playhouse box office at 760-746-6669, email, or via the website at www.patioplayhouse.com. Directed by Brent A. Stringfield. Produced by Deborah Zimmer and Laurissa Rudgers.