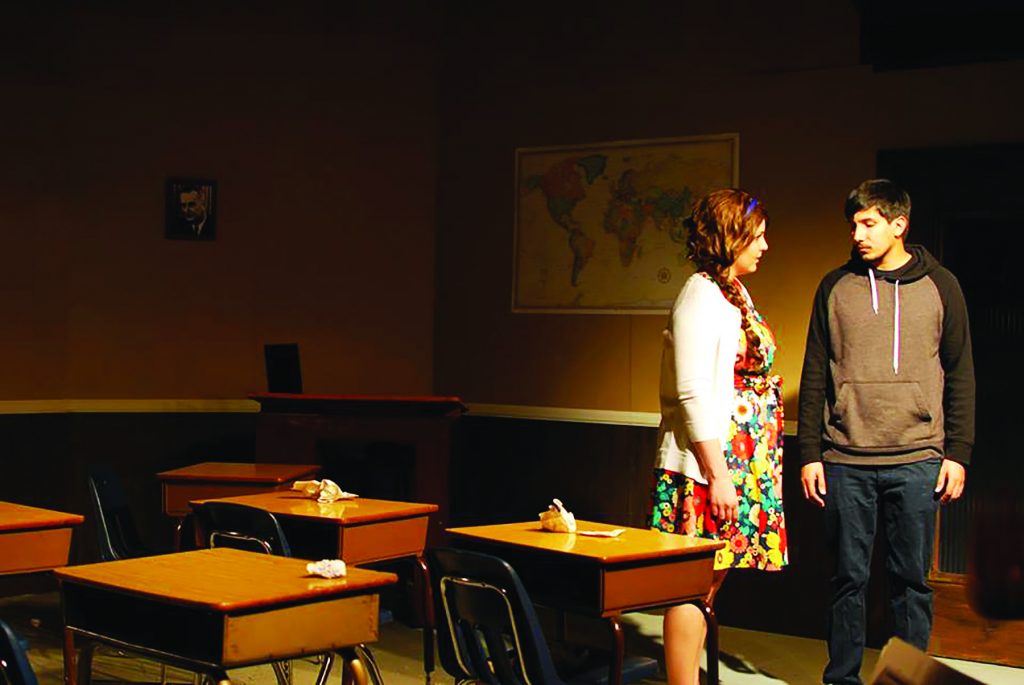 A true story has chilling undertones but an overall message of tolerance. Audiences will appreciate “The Third Wave,” based on a high school experiment in which a mock classroom activity to teach about fascism deteriorates into a real-life regime. Catch it onstage at the Escondido’s Patio Playhouse now through April 15.

A high school experiment spirals out of control in Joseph Robinette and Ron Jones’ “The Third Wave,” now playing at Escondido’s Patio Playhouse Youth Theater. It is directed by Geoffrey A. Cox and produced by Peggy Schneider.

This production (cast primarily with local youth, but with three adults playing the adult roles) is, chillingly enough, based on a true story. Set in 1967, the play centers around a young, popular teacher who tries to demonstrate the roots of fascism by giving his students an exercise in discipline not unlike that of a totalitarian society.

Shockingly, the students delight in the order and power of that discipline, and relinquish their freedom in favor of their supposed “superiority” over other students in the school. The class adopts the name “The Third Wave,” and soon many others, even from neighboring schools, clamor to be part of the “elite” group.

The 50th Anniversary of the experiment coincidentally landed on a specially scheduled April 5 field trip performance date, and Patio Playhouse welcomed Mark Hancock, one of the original students that participated in the social experiment, to speak firsthand with performance attendees at that event—as well as during scheduled talk-back events following the performances on April 7, 8, & 9.

Patio Playhouse’s “The Third Wave” is partnering with the San Diego Theatre Connection to support the Spring Forward Food Drive (benefiting The Jacobs & Cushman San Diego Food Bank) by running a collection station in the lobby of the theater for the duration of the show.

This drive is intended to raise resources and awareness towards the mission of the food bank, helping to provide meals to families in need throughout San Diego County via the provision of shelf-stable food items and funds to purchase said items. Patrons are encouraged to bring shelf stable food items to benefit local families or to donate online via the web portal. For more information on the food bank and our Spring Forward Food Drive, visit their website at sandiegofoodbank.org/

Friday and Saturday evening performances are at 7 p.m. with afternoon performances on Sundays at 2 p.m., with the exception of Saturday April 15. On that day, the closing performance of the run will commence at 2 p.m. (no performance will take place at 7 p.m. on the 15th). Please note that this show contains strong dramatic themes that may not be suitable for younger children.

Tickets: All shows will be presented at Patio Playhouse, located at 116 South Kalmia Street, Escondido (between Vinz Wine Bar and Continental Deli).  Tickets are available $12 for Adults and $8 for Youth 16 and under. Group rates are available for groups of 10 or more. For reservations, contact the Patio Playhouse box office at 760-746-6669, email, or via the website at www.patioplayhouse.com/