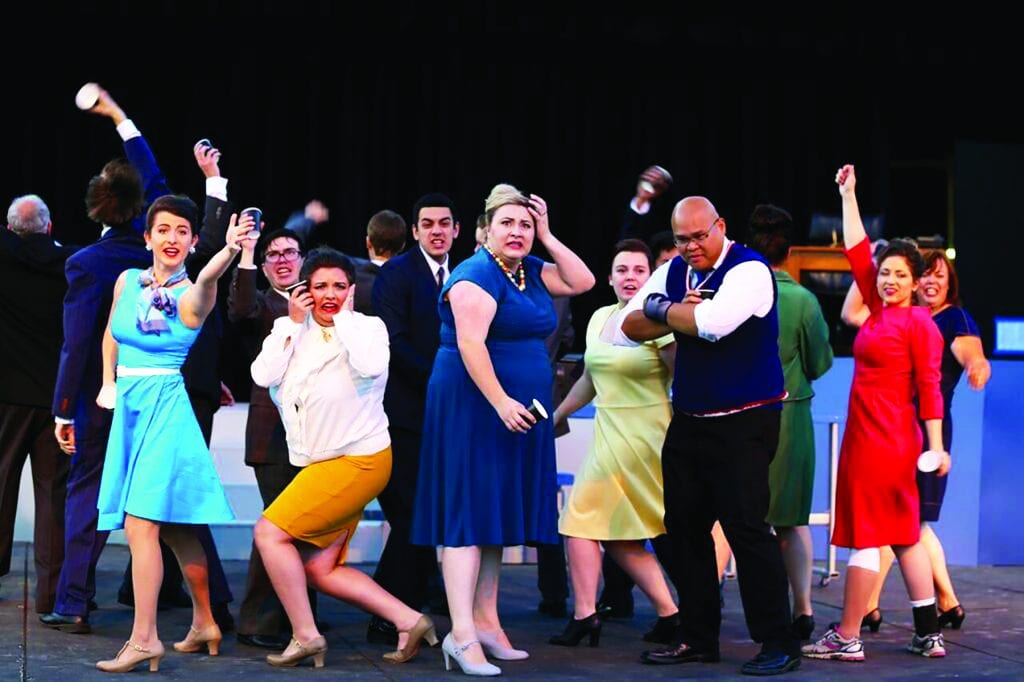 This rendition of ‘How to Succeed in Business Without Really Trying’ features both the entertaining cast and 9-piece live orchestra.

An irreverent and tuneful romp about 60s office life, Patio Playhouse’s production of “How to Succeed in Business Without Really Trying” will have audiences laughing and rooting for romance. Catch it at Kit Carson Amphitheater from June 30 through July 15.

The production is directed by Matthew FitzGerald, produced by Victoria Silva-Davis and Kelli Harless, with musical direction by Emily Awkerman.

Big business means big laughs in this clever lampoon of life on the corporate ladder which opens June 30.

The musical comedy hits the intersection of musical and “Mad Men” as it follows the rise of J. Pierrepont Finch. Using a little handbook, Finch (Kevin Phan) works to climb the corporate ladder from lowly window washer to high-powered executive. Along the way, he tackles such familiar but potent dangers as the aggressively compliant “company man,” the office party, backstabbing coworkers, caffeine addiction and, of course, true love in the form of Rosemary Pilkington (Lindsey O’Connor).

With music and lyrics by Frank Loesser and book by Abe Burrows, Jack Weinstock, and Willie Gilbert, “How to Succeed in Business Without Really Trying” won both the Pulitzer Prize and a Tony Award for Best Musical. This rendition features both the entertaining cast and 9-piece live orchestra, which will entrance audiences with the musical and dance numbers and have them long talking about their evening under the stars. The show offers performances on Thursdays through Sundays at 8 p.m. at Kit Carson Amphitheater.

Patio’s production is partnering with the San Diego Theatre Connection on the Readers in the Heights campaign supporting United Way of San Diego. This summer reading program helps children to maintain and increase literacy skills over the summer rather than sliding backwards, this year working to reach over 400 children in 4 locations.

Attendees to any production of “How to Succeed in Business Without Really Trying” are invited to open their hearts and wallets to this cause. Donations of children’s books and financial contributions will go to help children in City Heights avoid the “summer slide” and instead make strides in maintaining literacy. More information about this program is available at www.uwsd.org. The San Diego Theatre Connection can be found on Facebook, Instagram, Twitter and Snapchat at @SDTheatreConnection. Patio Playhouse is also participating in the 2017 Grand Ave Scav in-person scavenger hunt with 7 other local Grand Avenue businesses. Visit them on social media to learn more.

Tickets: All shows will be presented at Kit Carson Park Amphitheater, located at 3333 Bear Valley Pkwy, Escondido. Tickets are available for $25 for Adults, $22 for Seniors/Students/Military, and $18 for Youth 16 and under. Group rates are available for groups of ten or more. For reservations, contact the Patio Playhouse box office at 760-746-6669, email, or via the website at www.patioplayhouse.com.