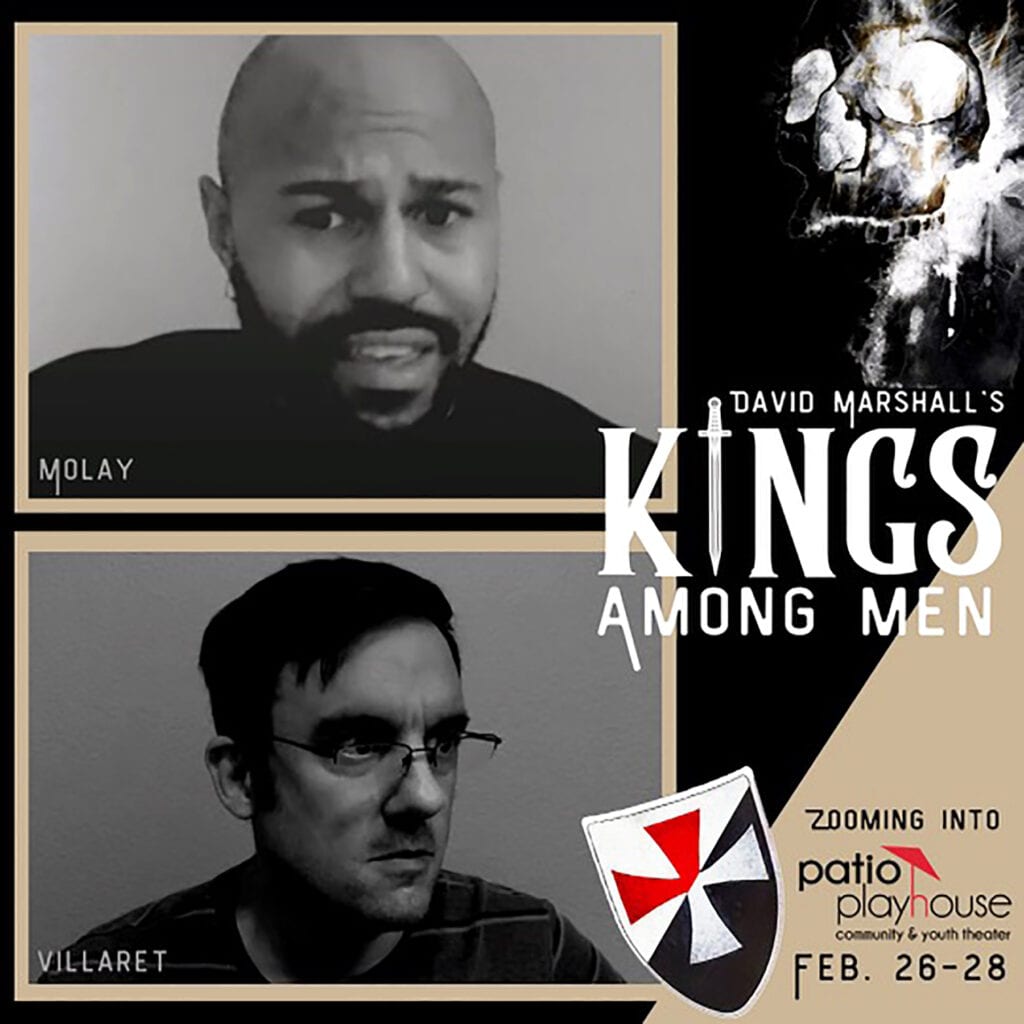 In its debut read, “Kings Among Men” is a powerful retelling of the fall of the Knights Templar and resonates with audiences today through its themes of integrity, toxic masculinity, respect, and betrayal.

While Zoom productions have become more common over the course of the last year, audiences to this production will be entranced not only by its talented performers, but also by the unique visual cues and intentionally choreographed classical score. The cast is led by Christopher T. Miller (Villaret) and William James (Molay) in a dance of brotherhood and betrayal, and rounded out by Ralph Johnson (Clement), Steven Murdock (King Phillip), Chris Braden (Guillaume), Tessa Grantham (Cassandra), Matt Sayre (Nogaret), and Cassiopeia Guthrie (Templars and Hospitallers).

This production, directed by Patio veteran director David Guthrie (“Little Women the Musical,” “Every Christmas Story Ever Told… And Then Some,” “I Ought to Be in Pictures”), marks David Marshall’s fifth script. Marshall is also a performer and was seen in Patio Playhouse’s 2018 production of “In the Heights,” where he played Benny, and in “I’ll Be Zoom for Christmas” last December.

The playwright explained that this show was inspired when, after a random search as to why Friday, October 13 is a haunted day, he “landed upon the day the Templar Order was dismantled and the soldiers brutally murdered.” This intrigued him, leading to six months of research and script development.

David Marshall says that the creative process of developing his 4 previous plays have brought him to the point of realizing that, with “Kings Among Men,” each of the scenes has its own musical backdrop. “Each line of dialogue, each beat, was determined through the music,” said Marshall. “It’s imperative that the music is played throughout the show,” he continued. “Without it, it’s a different show.”

Tickets: Performances of “Kings Among Men” will run this Friday through Sunday only (February 26 at 7 p.m., February 27 at 7 p.m., and February 28 at 1 p.m.). With the understanding that this pandemic has left many with empty pockets, all attendees are encouraged to attend whether or not they can afford to donate, though donations will be happily accepted.

Following registration, attendees will receive a link which can be used on one screen via email address; snuggling up on the couch with loved ones in quarantine and sharing that single screen is encouraged, as space is limited.

About the Company: Patio Playhouse is Escondido’s only community theater. Established in 1967, the playhouse is located in the heart of Escondido near the intersection of Kalmia and Grand. To find out more about Patio Playhouse, please visit www.patioplayhouse.com or find us on social media.