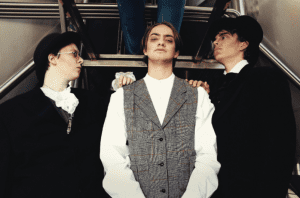 Patio Playhouse Youth Theater will present the school edition of “Sweeney Todd, The Demon Barber of Fleet Street” appearing through April 8 at the intimate Kalmia and Grand theater.

“Sweeney Todd,” with music and lyrics by Stephen Sondheim and book by Hugh Wheeler, is darkly witty and, in its original Broadway premiere, was awarded eight Tony Awards (including Best Musical). Since then, the show has become a worldwide success and this school edition adaptation, presented by Patio Playhouse’s talented youth, is a treat to behold!

This dark musical tells the tale of Sweeney Todd, a nineteenth-century barber who has been exiled unfairly after having been framed by a corrupt local judge in order to take advantage of Todd’s wife. Upon his return to London, a vengeance-fueled Todd meets the Mrs. Lovett, a baker who runs a local, faltering pie shop downstairs of Sweeney Todd’s new barbershop. Working together, the duo find a new, spooky ingredient to add into her meat pies… which quickly become the pride of London.

Patio Playhouse Youth Theater productions are always free from audition to curtain, and the theater has produced over 80 youth plays and musicals. As an additional enrichment opportunity, Patio Playhouse also hosts a summer Acting Academy, a day camp for young kids (age 6-14) to learn about theater and to get a chance to perform.

This week-long program trains participants in audition preparation, stage presence, singing, learning choreography, character development, and improv. The program ends with a Talent Revue that is open to friends and families. Any donations collected during the run of the show will help to provide scholarship funds so that more local Escondido youth are able to participate in this valuable arts camp.

All shows will be presented at Patio Playhouse, located at 116 South Kalmia Street, Escondido (between Vinz Wine Bar and Continental Deli).  Tickets are available for  $17 for Adults over the age of 17 and $13 for Youth 16 and under. Group rates are available for groups of 10 or more. For reservations, contact the Patio Playhouse box office at 760-746-6669, via email, or via the website at www.patioplayhouse.com. Directed by Laurissa Rudgers. Produced by Brenda Townsend. Music Direction by Emily Awkerman.