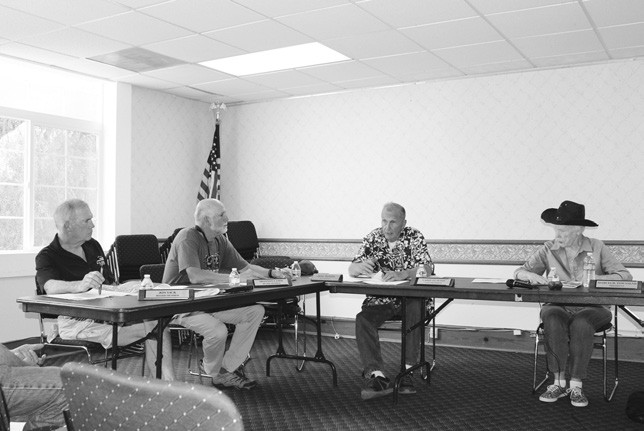 The Optimists originally agreed to pay the parks district $3,000 for the use of the Community Center for Western Days, and they paid it. However, they made enough from the festival that they were able to pay another $2,000 over and above that amount. This may make up for the fact that the parks district was stiffed for several hundred dollars last year over Western Days.

Johnson presented the check to board President Marcia Townsend, who wore a sparkly blue cowboy hat in honor of the occasion. For her part the board president presented Johnson with a lariat to help Johnson “lasso” volunteers for next year’s festivities. Johnson and the Optimists have already agreed to jointly sponsor both Western Days and the VC Stampede Rodeo.

“I think everybody was happy with Western Days,” observed Johnson.

In other news the board listened to a report from landscape architect Will Rogers on a study that he is working on with Wynn Engineering on a possible benefit fee assessment election to raise operating money for the parks district.

Currently almost all of the money that Parks & Rec gets is money that it is only allowed to spend on capital expenditures. It has a very small tax base and its budget is almost entirely based on use fees for facilities such as Community Center stage and the gazebo and Adams Park, plus fees for the ballfields, the tennis courts and Adams Park Pool.

For many years the district has operated on the edge of fiscal solvency. Part of the rationale for the purchase of the 15.5 acres of Star Valley Park in March was that it could be transformed into uses that would help raise money to pay for maintenance.

According to Rogers, a benefit fee assessment is based on benefits that residents get from being within a certain radius of the facility. For instance, the district could look to provide benefits to residents who live within a ten-minute driving distance from the facility. For such a purpose Star Valley Park, which is off of Vesper Road, is centrally located.

The board will need to decide how large a radius it wants to aim for, which translates into how likely residents within a certain area are likely to vote to increase their taxes.

“How far are you willing to travel for fun, education and recreation,” said Rogers.

Other ways that the 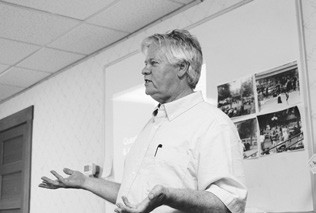 Will Rogers gives a presentation on benefits assessments as a way of raising funds for the parks district.

district could raise maintenance money include naming rights for parks facilities, endowment funds, and partnering with a large sports organization (see below).

One advantage of a benefit assessment election is that it would be limited to property owners and it would be conducted entirely by mail, so the district wouldn’t have to pay to schedule an election.

Benefit assessments can also be passed by a simple majority (50% plus one vote). “In looking at this benefit assessment area, how far is too far?” asked Rogers. A special assessment fee, which generates funds that can be used for any purpose, requires a two-thirds majority of voters to approve it.

At this point in the study they have no idea what the population of the area being studied is. They are looking at possibly asking an additional $50 a year from each property within the assessment.

They are also working on which parks facilities would be designated to use the money generated.

One advantage of such a guaranteed revenue stream is that the district would be able to borrow from it to fund capital improvements.

Rogers will continue to study and bring monthly reports back to the board.

Director Larry Glavinic gave a report on conversations that he had last week with representatives of Cal South Soccer. This organization, which puts on large-scale soccer tournaments, is interested in a facility that would provide as many as 16 soccer fields. These fields could be developed on the property adjacent to the recently acquired Star Valley Park and could bring a steady income to the district 22 weeks out of the year, said Glavinic.

“It would be a lot of candy for the money,” said Glavinic, who stressed that this would not take up any space in the initially acquired 15 acres of Star Valley Park, but in the remaining adjacent 28 acres that the district hopes to acquire from the Burkel family. The property is accessed by a gate that is across the street (Vesper) from Triple B Ranches Winery and the Cal-Fire station. But it also has an easement to Valley Center Road.

One possible downside of moving in this direction would be the traffic that would be generated by that many soccer games.

“We don’t want it to mess up Valley Center,” said Glavinic. “Just because it would be a revenue stream doesn’t mean that we necessarily want to do it.”

Director Jon Vick agreed. He compared this to the traffic that is created for several weekends out of the year at Bates Nut Farm. “If we create traffic jams twenty weekends a year people wouldn’t like it.”

Directors were interested enough in the idea that they agreed that several board members would go to visit some existing soccer fields on the coast on August 1.