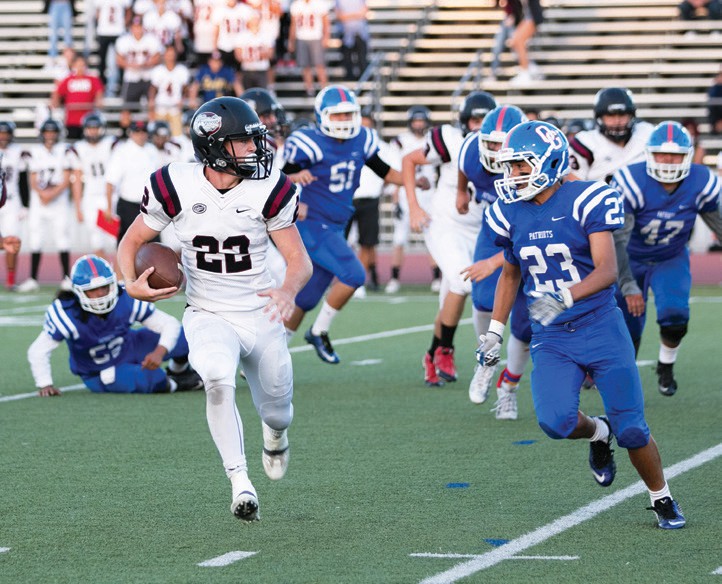 Tireless back Ty Patterson, carried 44 times against HC and rung up 220 yards on the ground. Photo by Lenny Kerbs

Classical Academy’s resurgent season came to a disappointing end Friday night at Orange Glen High when visiting Horizon Christian (6-6) jumped out to 20-0 first-half lead and was never headed en route to 48-34 semifinal victory in Division V play. The setback was also the first that the No.1 seeded Caimans had suffered in well over a month after having run off a notable five-game winning streak.

Thus, the Caimans’ solid season is now over and the record will show that CA finished out the year with a solid 7-5 slate. Not at all bad when considering that the Caimans got off to a sluggish start to the year by dropping four of their first six games. Their ability to dig themselves out of that early hole and resurrect their season is certainly worthy of both acknowledgement and praise.

Classical was hoping that it could use its emphatic 41-6 victory over Holtville in the quarterfinals the week before as a springboard to even more playoff success. But the Panthers were primed and prepared from the outset and would have none of it. HC quarterback Thomas Marcus was a weapon that the Caimans just couldn’t contain as he unloaded for three touchdown tosses. Marcus also had a dynamic wingman in the versatile Jalen Nelson, who got it done by latching onto a pair of scoring pitches.

As mentioned above, the Panthers got the drop on CA by scoring three quick touchdowns and it wasn’t until JK Haman toed through a 24-yard field goal in the second quarter that the hosts finally got on the board at 20-3.

But for almost all of this challenging night, the Caimans were engaged in an uphill battle just to stay within hailing distance. After the Panthers’ initial blitz, the Caimans were clearly hard-pressed and would be unable to get any closer than 14 points.

But to its credit, Classical never quit and kept after it to the very end. Quarterback Caleb Moen, sneaky good from in tight, managed to find paydirt on a pair of 1-yard totes. Moen also hooked up with tight end Caleb Crist on a short 4-yard TD toss. Classical’s most impressive score came on a nifty 44-yard jaunt by Jake Gilbert, who showed some nice moves along the way.

And then there was beast-of-burden running back Ty Patterson, who seems to operate on an inexhaustible reserve. The athletic Patterson would be asked to carry the ball a staggering 44 times and he did so to great effect, gaining 220 yards on the ground and wowing many in attendance with his amazing stamina. Though he didn’t score a TD, Patterson did penetrate the end zone, tallying on a pair of two-point conversions.

So the 2016 Classical season is now in the books. But from a tough beginning, the Caimans found their footing, went onto win the Pacific League, garner a top seed in the postseason, capture a playoff game and then miss making a trip to the finals by just a single step. By most any measurement, that is a season well worth remembering.