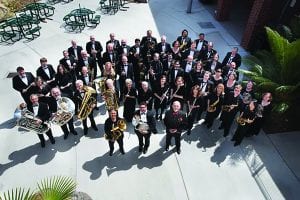 A holiday concert designed for music enthusiasts of all ages is planned for Sunday, December 3 at 2:30 p.m. in Palomar College’s Howard Brubeck Theatre.

The Palomar/Pacific Coast Concert Band, directed by Ken Bell, will perform Christmas and Hanukkah carols along with other seasonal selections. In addition, the program will feature an exploration of the different instruments in the band and how they are combined to create symphonic sound.

The program includes arrangements of “Adeste Fidelis,” “Silent Night,” “Jolly Old St. Nicholas,” “Good Christian Folk,” “Rejoice,” “Greensleeves,” and the Ukrainian Bell Carol, to name a few.  The varied program also features the Huron Indian carol Twas in the Moon of Wintertime and a medley of Hanukkah melodies to celebrate the season.

Bell spoke about his fascination with “the concept of vibrations enveloping us in all their forms…vibrations of color, touch, time, and emotion, all in consonance and dissonance, simultaneously.” A versatile instrumentalist and singer as well as conductor, Bell said that in addition to celebrating the season, this concert explores “why humans find joy in organizing these resonances into musical sounds and forms that can provide harmony in our lives.”

Ticket prices are $10 – $15. Children are free, when accompanied by a paying adult. More information is at palomarperforms.com.