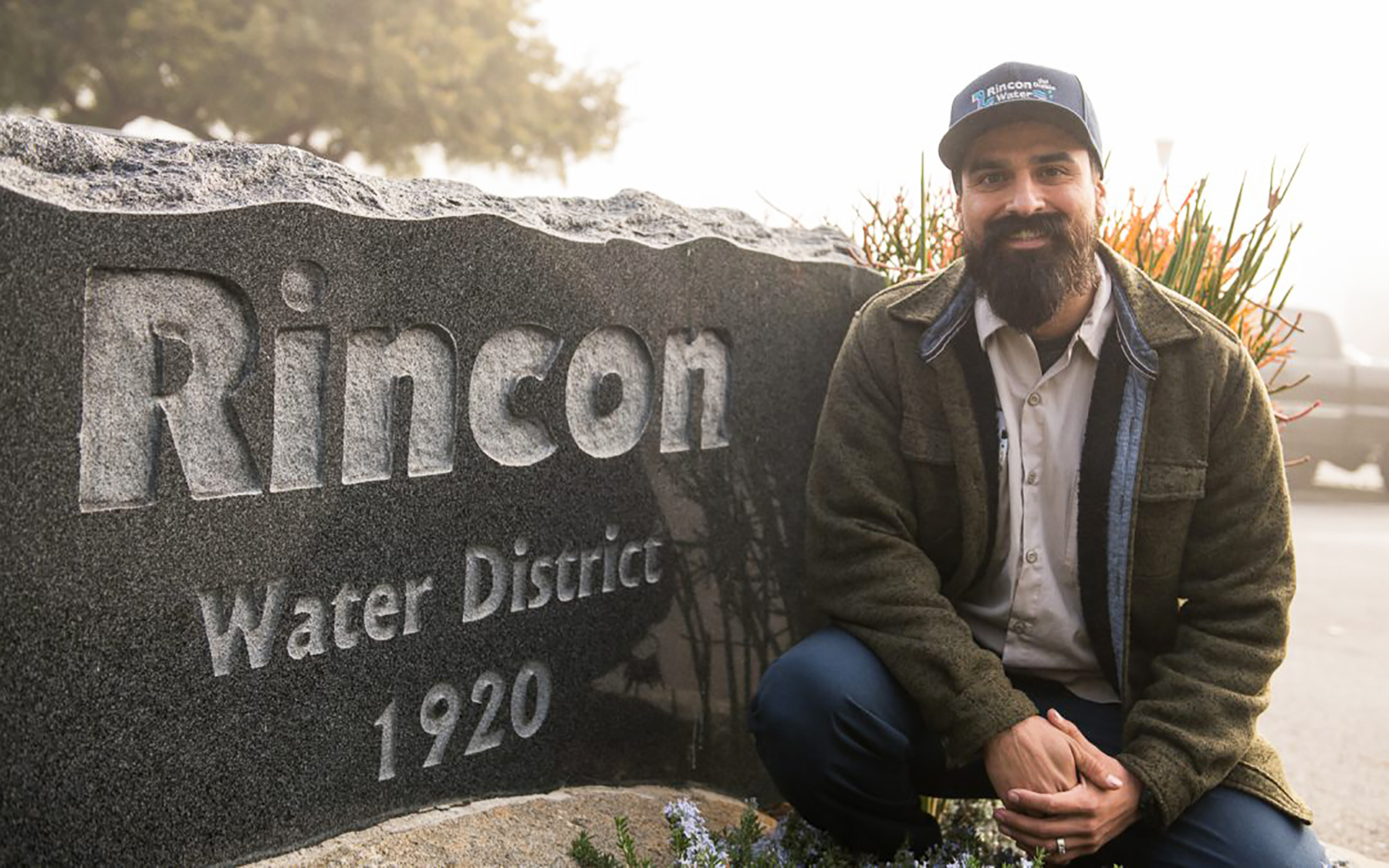 Josh Lomeli at the Rincon del Diablo Municipal Water District in Escondido, where he is a new water technician.

A Palomar student on the cover of the Spring 2019 Class Schedule will earn his degree in Water Technology this year. He is already on the job with the Rincon del Diablo Municipal Water District in Escondido.

Like many students, Josh Lomeli cycled through a handful of career ideas before settling on water. After all, it was one field that would never run out of opportunity: “Everyone needs water,” he said.

Lomeli’s father, Joe, has worked in water technology and operations for more than 25 years and currently serves as the Operations Manager for the Ramona Municipal Water District. Once the younger Lomeli had decided to follow the same path, the 28-year-old husband and father of three came to Palomar College.

“I live in Ramona, my work is in Escondido and Palomar is right there in San Marcos,” he said. “I couldn’t go anywhere else.”

Lomeli recommends to others interested in pursuing water technology to enroll in water classes as soon as possible, since the education gives applicants an edge with water districts. There are also State Water Resources Control Board exams to pass, and certifications to earn.

“Josh Lomeli is a perfect example of the exemplary training and job preparation that Palomar College has consistently provided for many years,” said Rincon’s Director of Engineering and Operations, Clint Baze. “Each and every water system operator here at Rincon has attended classes, graduated from, or become certified because of education received at Palomar College.”

According to Lomeli, it’s a job that combines technical expertise with hands-on labor. “I started off as a Water Service Technician, and over a period of time, they prepare you for more responsibilities,” said Lomeli. “So I’m still doing labor, but I’m also working with meters, programming radios, doing construction, laying down pipe, operating the system.

“I like a lot of things about it,” he added. “I like the responsibility of making sure your customers have water.”

He said water service is like many other service industries: If all goes well, the customer doesn’t have to think about it, blissfully unaware of the thousands of people working hard, across a variety of agencies, to deliver drinking water to local homes and businesses.

“It’s very diverse, you know—there’s a lot of doors once you get in that you can sort of go through if you want to move up,” Lomeli explained. “There’s a lot of opportunity.”

Baze said the job market for water professionals is “the best it has been in a very long time” and explained, “Job candidates who have participated in the Water Technology program at Palomar College are typically the first to be interviewed.” 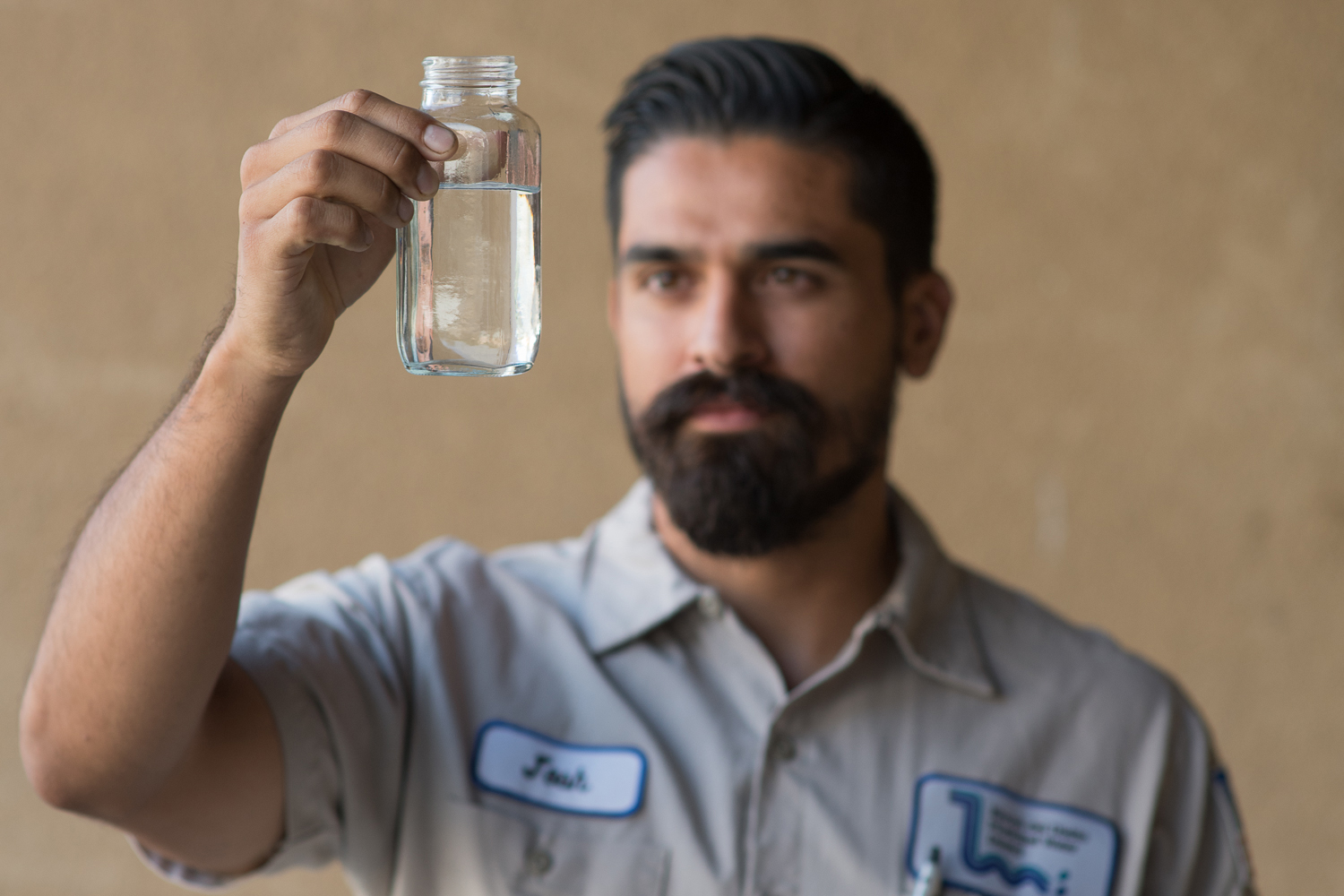 Josh Lomeli at the Rincon del Diablo Municipal Water District in Escondido, where he is a new water technician.

As a student with a family and a job, Lomeli said he found a good fit in Palomar’s water program, which has enabled him to chip away at his associate degree two classes at a time. He expects to graduate at the end of 2019.

“It’s been good,” Lomeli said of his experience at Palomar. “I appreciate that the water classes are late (in the day) because it works out for anybody who’s in the water industry—after they get off work, they can go to class.”

Baze added: “As a water professional for over 34 years, and a Palomar grad, I can tell you the performance of people who work in the water industry that have attended Palomar College are second to none.”