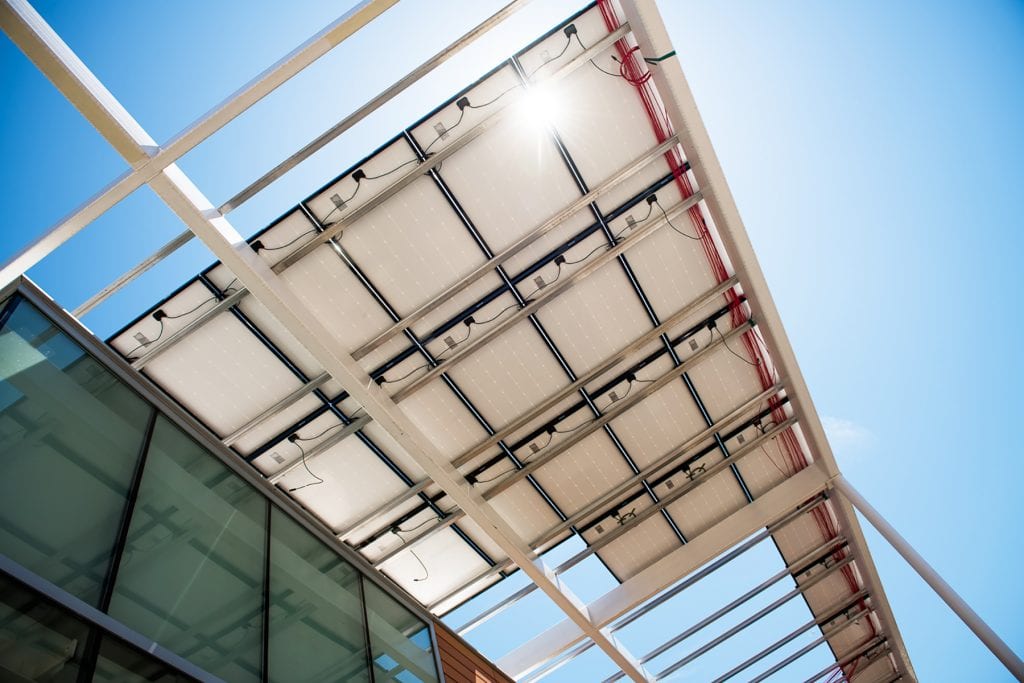 A 180-kilowatt photovoltaic array was installed this summer on the new Maintenance & Operations (M&O) building, which has won numerous awards for its energy-saving design features.

From award-winning “green” buildings to solar energy to high-efficiency LED lighting, Palomar College is reducing its carbon footprint by slashing the amount of electricity that’s needed to operate a college campus.

“As one of the largest institutions in North County, Palomar is leading the way in reducing greenhouse gas emissions by implementing strategic upgrades that are better for the college, and ultimately better for the environment,” said Superintendent/President Dr. Joi Lin Blake.

The list of recent sustainability initiatives includes groundbreaking designs as well as institution-wide upgrades that add up to significant reductions in energy consumption and costs:

Nearly every new project on campus has been built with large photovoltaic arrays. These include a 443-kilowatt system under construction atop the parking structure that opened in 2018. The 180-kilowatt system recently installed on the M&O building is sized to make that facility “net-zero” within the first year. The college is nearing its goal of 1 megawatt of solar capacity.

As part of a five-year effort to implement the California Clean Energy Jobs Act, or Prop. 39, Palomar replaced all light fixtures with LED lighting and installed a state-of-the-art Energy Management System. Energy savings are anticipated to amount to 3.3 million kilowatt hours (kWh) every year—equivalent to 2,334 metric tons of CO2 not being released into the atmosphere.

In addition to installing efficient fixtures like low-flow toilets, Palomar has implemented “Smart Controllers” to maximize efficiency within its large irrigation system. The college also added a third groundwater well this year to support the Edwin & Frances Hunter Arboretum (the two original wells pump water to campus landscaping). With the third well, as much as 75-85 percent of the irrigation water used on campus will be groundwater, drastically reducing the college’s demand for imported water.

To reduce carbon emissions and ease traffic congestion, Palomar helps students obtain discounted “Compass” cards for the North County Transportation District’s trains and buses. Parking has been streamlined by the opening of a 1,400-space structure, and electric vehicle charging stations have been opened at “premier” locations on campus.