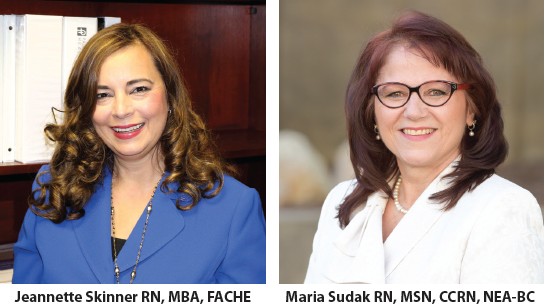 “Palomar Health is privileged to have such well-qualified, experienced and excellent leaders, Maria Sudak at Palomar Medical Center and Jeannette Skinner at Pomerado Hospital,” said Robert Hemker, President & CEO of Palomar Health. “They are the right leaders, at the right time, to continue raising the level of excellence and in­novation in patient-first care for which hospitals are known.”

“I am honored and thrilled to have been selected as vice president of Palomar Medical Center,” Sudak said of her appointment. “We are moving in a new direction and the possibilities are endless.”

Sudak holds a Master of Science in Nursing degree and is currently a student at the Medical University of South Carolina pursuing a Doctorate in Health Administration. Maria is cer­tified in Critical Care Nursing (CCRN) and is Board Certified as a Nurse Ex­ecutive (NEA-BC).

Prior to joining Palomar Health, Jeannette Skinner served as the Ad­ministrator for Shriners Hospitals for Children in Tampa, Florida where she was responsible for the strategic and operational oversight of all hos­pital activities, staff development and physician relations, providing care to exceptional children with com­plex care needs both regionally and internationally. A registered nurse, Jeannette has extensive experience in healthcare delivery and administration and has held various leadership posi­tions over the past 15 years including Chief Executive Officer of Wuesthoff Medical Center in Melbourne, Florida, and Chief Executive Officer of Min­eral Area Regional Medical Center in Farmington, Missouri.

Skinner earned a Master of Busi­ness Administration from Webster University St. Louis and Bachelor of Science in Nursing Degree from Uni­versity of Texas. She also holds Board Certification as a Fellow of the Ameri­can College of Healthcare Executives (FACHE), the nation’s leading profes­sional society for healthcare leaders.

“I am delighted to be joining Palo­mar Health in the mission to heal, comfort and promote good health and excited to work with such an amazing team,” said Skinner.