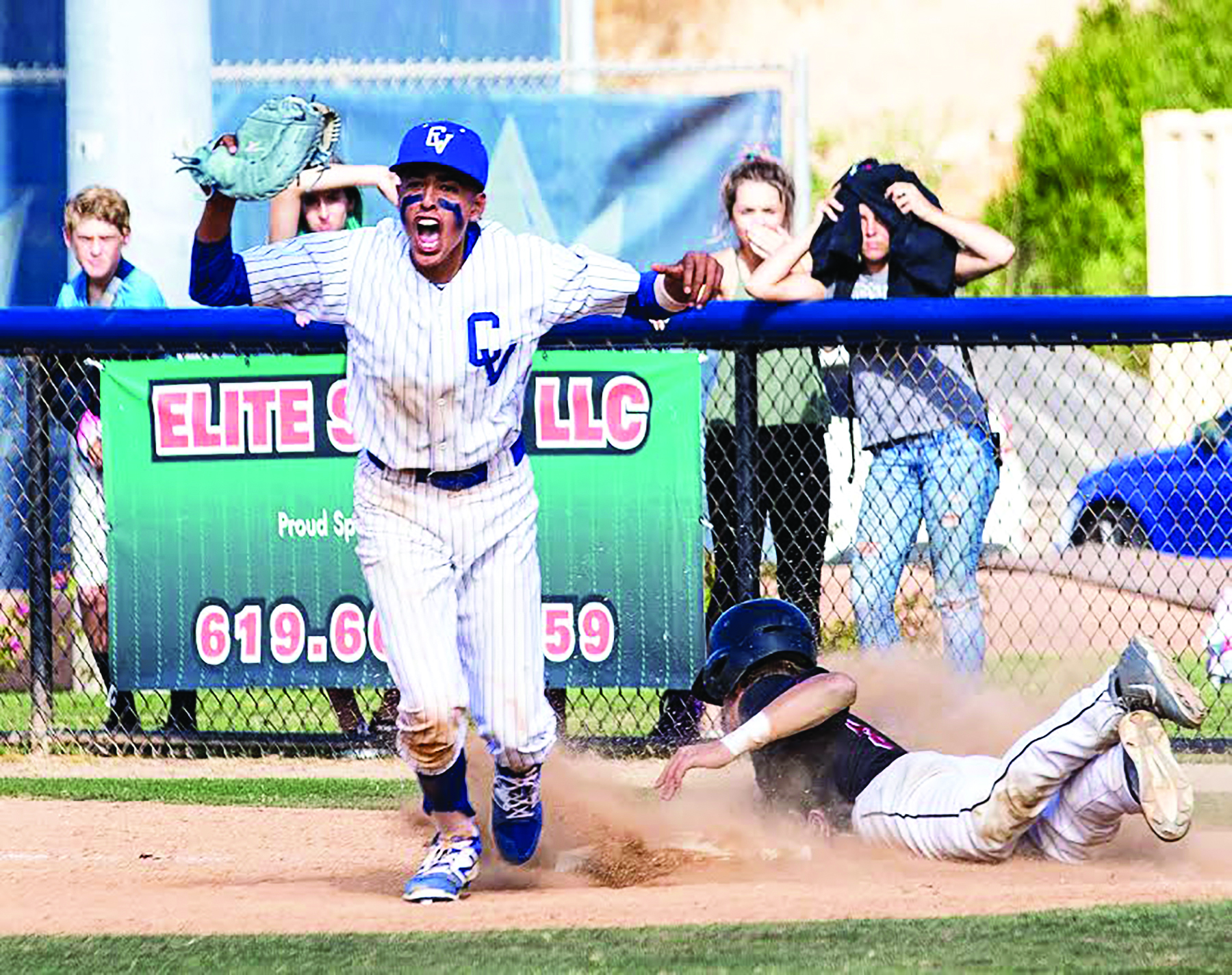 It’s one thing to get beat. It’s quite another when, to some extent, you contribute to your own demise. Realizing that there was a self-inflicted component to any defeat makes it sting all the more.

And what makes the scenario described above even more frustrating is when, in many ways, a case can be made that perhaps the better team didn’t win. Well, without a doubt, Classical Academy knows the feeling and is living that gnawing reality. 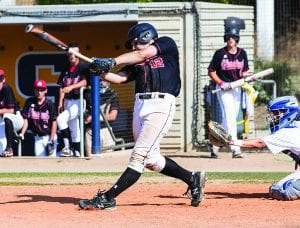 First baseman Ian Peters ignited the Caiman rally with a hard-shot single that caromed off the shortstop.

In the aftermath of the Caimans difficult 5-3 loss to Chula Vista (25-7) in the Division IV San Diego Section CIF Baseball Championship Final held at the picturesque UCSD ballpark, CA was left to ponder the weighty and troubling considerations of what if and if only.

It was a disappointing end to a terrific and memorable campaign that saw coach Ron Sisler’s club win 18 of its final 20 contests and one in which Classical (23-9) ran off an impressive 11-game winning streak. Moreover, 2017 was a year in which CA exhibited periods of real magic in addition to prolonged stretches of playing wondrous ball. Only the disheartening conclusion spoiled what otherwise could only be characterized as one terrific season.

After showing their mettle, resolve and intrinsic belief by battling back from a three-run deficit, the Caimans let things get away from them in a decisive bottom half of the fifth inning. CA right-hander Jordan Peterson, who had steadied himself after an uneven start, committed the bane of all 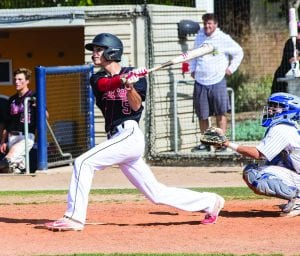 Noah Dull was Classical’s hitting star with a pair of hits including a clutch double that drove home two runs.

pitchers by issuing a leadoff walk, on four pitches no less. It is utterly astounding how often free passes turn into something quite costly and alas, that would prove to be the case for Peterson. As the age old lament of baseball sighs, oh those base on balls!

But despite the walk, the competitive CA hurler looked like he might escape any damage when he recorded a fly ball out and then induced Spartan Alex Celiceo to hit a slow chopper to short. Gifted Caiman infielder Chase Martinez charged in but under the gun to quickly make a play, he couldn’t come up with the handle. Suddenly, the Spartans were in business with two runners aboard.

And then shortly thereafter, left-handed hitter Ricky Yoquigua made the Caimans pay when he sent a soaring fly ball to left field that dropped just inside the foul line – literally a perfect placement that prevented outfielder Jake Mizel from having any sort of chance of tracking it down. Yoquigua’s RBI double staked the Spartans to a 4-3 lead and two hitters later that edge was increased when Peterson uncorked a wild pitch. Time was now beginning to run out on the Escondido-based club.

But Classical was far from done. Seeking to fight right back, centerfielder Noah Dull who had earlier whacked a two-run double, sat on a curve from Spartan righty Antonio Garcia and ripped it into left for a one-out single in the sixth. Next up was another talented youngster Dane Kelsey and the sophomore continued his splendid postseason play by rolling a grounder into right for a base hit. However this promising chance evaporated when Zack Jordan hit into a force play before Mizel nailed one right on the button but unfortunately directly at centerfielder Amador Medina for a line drive out. 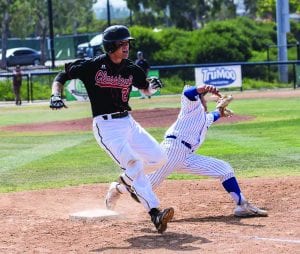 Catcher Micah Anselmo crosses first base with the Caimans first hit of the afternoon. Photos by Lenny Kerbs

Though still down by a 5-3 count entering the top of the seventh, the Caimans were not only hopeful but actually expectant that they could rally given the fact that the top of the order would be coming up. But no more magic would be forthcoming, nor was a dramatic comeback in the cards. Dangerous hitters Martinez, Micah Anselmo and Trevor Blount were retired on a fly ball and a pair of groundouts and with that, Classical’s title chase had come tantalizingly close but there would be no cigar. In the immediate aftermath of this hardluck setback, the thought of what could have been hung over the Caimans like a black cloud as the post-game ceremonies and presentations were conducted.

It wouldn’t have been difficult to make the argument that on at least some fronts, Classical was the superior team. For example, when it came to swinging the bats, it wasn’t even close with the Caimans demonstrating much more prowess at the plate. Outhitting CV eight to four, that margin would have been even more substantial if five other balls that were either hit deep or right at a defender had not been snared.

Normally tight on defense and supple with their gloves, Classical committed an uncharacteristic four errors that also severely damaged its chances. And though Peterson didn’t show his best because his signature breaking pitch wasn’t quite as nasty as it can be, that didn’t change the reality that only one of the five runs he allowed was earned. Against an outstanding and opportunistic squad like the Spartans, being generous and giving away gifts will most likely prove to be your undoing.

At the game’s outset, it looked like Classical might get the early jump when leadoff hitter Martinez smoked a deep shot to left center that had double or triple written all over it before outfielder Celiceo made a tremendous running catch to deny the frustrated Martinez. However, CA was undeterred and responded with an infield single from Anselmo which preceded a sweet piece of hitting by Trevor Blount, who reached out and deftly served another hit into right field. At this point, Spartan hurler Garcia appeared headed towards trouble but he quickly settled down to retired the side on a pop out to second and a harmless fly ball.

And while the Caimans hadn’t been able to capitalize on their opportunity, the Spartans weren’t about to fretter away their chance in the first inning. Rafael Iribe got things started when he squibbed a ball that caromed off of first baseman Ian Peters. Alertly, Blount at second scooped it up and underhanded a toss to Peterson who had moved over to cover the base. The throw clearly had Iribe beaten but the hustling Peterson apparently couldn’t locate the bag with his foot because the umpire deemed the runner safe. The play was ruled an error and would set in motion a two-run CV outburst.

Celiceo then backed up his sterling grab in the top half of the frame with a hard smash over the leaping Blount. Misfortune continued to dog the Caimans when third baseman Ethan Pillsbury threw low to first on a subsequent grounder which brought home the first run of the ball game. Bryan Valenzuela then tacked on another score when he delivered a well-struck sacrifice fly.

Things might have even got worse for CA but with the infield in, Pillsbury grabbed a chopper and fired a strike to catcher Anselmo to cut down a potential third run at the plate. Peterson then got out of any further difficulty with a timely punch-out.

However, CV was to pad its margin an inning later. Showing that fortune was clearly not on his side, Peterson whiffed Albert Munoz only to see the third strike elude Anselmo which permitted the Spartan runner to reach base safely. Diminutive Jorge Lucero then spanked a liner into left-center for a clean single. And after a successful sacrifice bunt, Iribe was credited with an RBI when he chased home another Spartan run with a deep fly to center.

Despite trailing 3-0 through three innings, having hurt themselves with defensive lapses and already being forced to confront some real adversity, the Caimans showed no signs of panic or apprehension. Their perceptible sense of assurance and confidence remained unshaken and sure enough, the turnaround that they were anticipating was about to take place.

Muscular first sacker Peters proved to the igniter in the fourth when he lashed a hard shot off of shortstop Iribe that ended up on the outfield grass. Now it was Pillsbury who kept the conga line moving by shooting a grasscutter up the middle for another hit. Enter sophomore Noah Dull who has been an absolute revelation with his timely and clutch raking during the postseason. Once more rising to the occasion, Dull put a serious hurt on a Garcia offering and drove it so deep that it bounced off the left-centerfield fence. Peters and Pillsbury came racing home on Dull’s blast of a double and just like that the differential had been reduced to a slim 3-2.

Obviously feeding off a real wave of momentum, Dane Kelsey gladly joined the parade when with the infield drawn in, the burgeoning youngster drilled another smash that Iribe couldn’t contain and suddenly it was a brand new ballgame at 3.

With the appreciative Classical crowd now intoxicated with excitement, the Caimans were eagerly hunting their first lead after a nicely executed sacrifice bunt by Zack Jordan put Kelsey into scoring position. But though he was far from overpowering and it was undeniable that Garcia was often hit hard and was awfully blessed at times, it must be acknowledged that whenever he needed to produce some big outs and get off the hook, he managed to do so. So after Mizel lined out, Garcia walked off the mound still tied when he got the accomplished Martinez to ground out to short.

And that set the stage for the eventful fifth where the Spartans would push across the two runs that would bring them a title and dash the dreams of a gallant and to a certain degree, snakebit Classical squad.

Though Classical will be returning some truly gifted ballplayers next season like Dull, Blount, Peters, Kelsey and Pillsbury who are more than capable of sustaining as well as adding to a winning tradition, the collection of departing seniors will be next to impossible to replace.

It isn’t easy to find a standout like Peterson who can really deal from the hill, not to mention swing a pretty damn good sick. And what about Martinez, an outstanding two-way talent who is a potent hitter and a slick fielder with a cannon for an arm?

And you can’t help but admire the agile and athletic Mizel, because he can contribute in a number of ways. Finally, there’s the physically impressive Anselmo, a catcher with a bona fide bazooka and someone who is always a threat whenever he steps to the plate.

To say those guys will be missed would be a classic understatement because it was their leadership, competitiveness and drive that helped forged the way to a tremendous season that will be forever cherished.

In a way, it seems a bit of an injustice that the Caimans didn’t make it all the way to the top. Not only did they possess a solid and formidable lineup from top to bottom but their athleticism and baseball aptitude was special and rarely found in the prep ranks. They were fun to follow and a gas to watch. They were as entertaining a bunch as you could find.

And though they didn’t quite reach their ultimate goal, that in no way diminishes what they were. Simply put, the Caimans coalesced into becoming one hell of a ballclub. One to be admired and justifiably remembered.