Ortega making an immediate impact with the Gulls 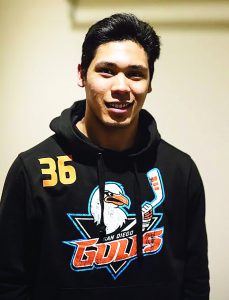 Ortega has a reason to smile about his fast start with San Diego.

One of the storylines that really resonates with the sporting public is the saga of a local boy going off somewhere and making good.

Taking it a step further, it becomes even more compelling when said athlete subsequently returns and starts making noise as a member of the hometown professional franchise. Dreams don’t get much better or more satisfying than that.

Well folks, 23-year-old Austin Ortega, Escondido native and hockey standout, is living that dream. Having wrapped up a celebrated stint at the University of Nebraska at Omaha, Ortega recently signed an agreement with the San Diego Gulls of the American Hockey League that will carry him through the balance of this season and the next.

And damn if the kid isn’t already making the most of the opportunity! Taking the quantum leap from college puck to a pro league that is highly esteemed and just a cut below the ultimate (the NHL), the 5-8, 170-pound Ortega is proving he’s more than up for the challenge.

Seeing anywhere from 15 to18 minutes of action a night, sometimes manning the power play and displaying a remarkably quick adaptation to the pro game, Ortega is proving to be a splendid addition to an accomplished Gulls squad that won 43 games during the regular season and finished second in the Pacific Division with a hefty total of 91 points.

Tellingly, it hasn’t taken Ortega long to fit in with his new mates and make his presence felt. You talk about making an impact right from the outset, try this on for size. In just six games while donning the number 36 for the Gulls, Austin has already lit the lamp four times, chipped in with an assist, scored on a man advantage and displayed that he’s no pushover with six minutes in penalties. His deadeye accuracy as a shooter has manifested itself in the fact that he’s needed only 13 shots to generate his four goals which computes to a spiffy and highly efficient 0.308 shooting percentage.

As for his background prior to hooking up with the Gulls, let’s give you the carwash version. First exposed to the game at the Escondido Iceoplex, Ortega immediately took to the indoor sport that truly did captivate and fascinate him. Showing a remarkable natural aptitude right from the start, he rose through the youth ranks and played for teams such as the San Diego Jr. Gulls and the L.A. Hockey Club. 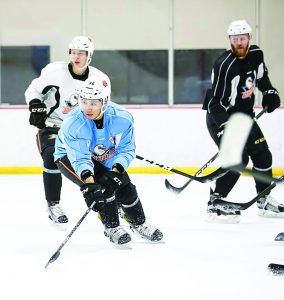 Eventually, he would ascend to the prestigious United States Hockey League where in two years of action, he would demonstrate a consistent nose for the net and a propensity for getting on the scoresheet.

That was to be the springboard for the productive Ortega to eventually land at the UNO where his educated stick continued to churn out terrific results. Three times he tallied 20 or more goals while achieving the notable highlights of scoring in his first ever college contest, registering the fastest goal to open a game in Maverick history (11seconds) and being a heavy lifter in helping his squad secure a surprising berth in the coveted Frozen Four.

He was to finish his exemplary college career on an extremely high note. Setting personal highs in both assists (27) and points (47), Ortega was a National Collegiate Hockey Conference Player of the Week three times in 2016-17. Based on that kind of achievement, it was a foregone conclusion that the potent right winger would justifiably be selected as an All-Conference first-teamer.

You probably can’t find a page in the UNO record book where he’s not mentioned because it’s replete with his name. He ranks second all-time in career goals (70), third in shot attempts (532), fourth in scoring (139 points), fifth in power play goals (21) and tenth with 69 total assists.

But of all the stats that he amassed, the one that truly commands your attention and gives evidence to his status as a clutch and deft sniper is the following; he is tied for the NCAA record with 23 career game-winning goals. Now, that’s some serious marksmanship while under fire. It means that Ortega doesn’t shrink from the big moments and knows how to respond when things become acutely pressurized. So how did he do it?  While readily giving credit to his teammates who ably set the table and got him the puck in prime positions, Austin also talks about a mindset that allowed him to excel in such circumstances. “I’ve just always had the drive to be that guy that comes through when things really matter the most,” he says.

The marriage between Ortega and the Gulls seemed almost foreordained since it’s such a natural union not only from a public relations standpoint but also because it’s so mutually beneficial. San Diego gets a talented up-and-comer who can put the biscuit in the basket and adds firepower and depth to the roster, while Ortega is placed in a highly competitive environment that should dramatically hasten his overall development as a player. Austin is fully aware that if he can carve out a niche as a viable scoring threat with the Gulls, his longtime ambition of someday reaching the NHL becomes all the more realistic.

Thus far, Ortega seems to have made the adjustment to the pro level rather smoothly although he’s quick to point out the contrasts between the AHL and college ranks. “Oh man, the speed of the game is definitely different,” he begins. “And up here the players are so much stronger and bigger. These guys really know how to make plays and finish things off.”

Another factor that has created somewhat of a comfort zone for him is that sometime in the past that he has either played with or against a number of his current teammates. So instead of walking into a locker room where he was a complete stranger, he saw some familiar faces which immediately put him more at ease and made the transition less of a culture shock.

As to what he hopes to bring to his new team, Ortega ticks off a few of his many attributes. “Well hopefully, my speed, agility and quickness will help. And then I want to offer an offensive game that will produce points and be a real factor as I get more experience.” 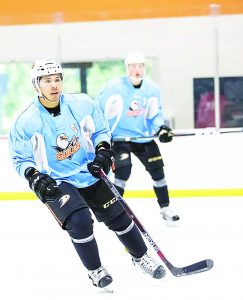 Austin Ortega looks forward to being a real force for the Gulls both this year and next.

Ortega’s inaugural week up with the Gulls was more than eventful, it was downright illuminating. In his first AHL game on April 1st  versus Tucson, he admits to being a bit cautious and concentrating on just getting through his initial shift without making a mistake. But as the game wore on, Austin quickly settled in and came to realize that he had the skills and wherewithal to be a potential fit at this level of competition. Moreover, he had the additional satisfaction of notching his first pro point which came on an assist.

Four nights later in Stockton came a watershed moment when he put the disc behind Heat netminder David Rittich for his first professional goal. “It happened in the first period,” Austin relates. “I was positioned out in front and just got a great pass from behind the net. I was right there to put it in.”

With his confidence starting to build and getting ever more acclimated to the AHL style of play, Ortega tallied again on April 8 when he delivered the only SD score in a 3-1 loss to Ontario.

And then he continued to give every indication that he’s a youngster destined for positive things when he finished the regular season with a flurry, scoring in each of the final two games which not coincidentally happened to be 4-3 (SO) and 5-3 Gull victories.

Please take note that Ortega earned  three of his four goals against Ontario, the very team that the Gulls will meet in the semifinal round of Pacific Division playoffs that kick off this Friday night at the Valley View Casino Center. Based on the manner in which he’s been able to pierce the Reign net thus far, look for Gull coach Dallas Eakins to perhaps give his newcomer more than ample ice time in hopes of tormenting Ontario even further.

When you watch Ortega in action, it’s easy to see why his future appears so promising. First, there’s that quick, explosive burst. It only takes him but a few strides before he’s revved up to top speed. Because of his rather diminutive size, he has no difficulty maneuvering from here to there, artfully ducking in and out of traffic where the opposition has a tough time tracking him.

Fundamentally he’s sound and from a positional standpoint, he knows where exactly he needs to be at any given moment. A good stickhandler who can lug the puck with effectiveness and dexterity, he also has superior hand-eye coordination  that translates in any number of ways.

And just because he isn’t the most imposing specimen around, don’t for a minute think that Ortega can’t be physical enough when the situation requires. Playing much bigger than his stature might suggest, he can hit when needed and more than hold his own on the backcheck. Plus, opposing defensemen soon discover that he isn’t all that easy to move out.

His passing and playmaking have really become honed, particularly in the past year and a half. So much so that Ortega, despite his deserved reputation as a top flight goal getter, isn’t hesitant about making a pass or feed his first option while on the attack. 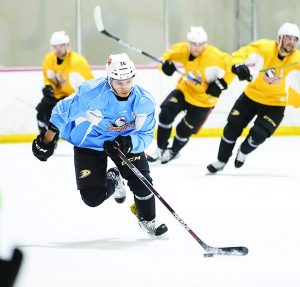 Austin Ortega, newcomer to the Gulls, is fleet of foot and a fine stickhandler. Photos by Lenny Kerbs

But you just can’t ignore the wrist shot that has been his bread and butter. His release is effortless and he can snap off a bullet just like that. And pity the poor goalie who has to guess where Ortega might be going because he can drill one low on the ice or just as easily pick a corner topside. In hockey, there are those forwards who are simply natural goal scorers. You’d be remiss if you didn’t count Austin among that group..

When asked if he’s at all surprised at the success he’s had so far in his brief pro career, Ortega adopts a rather humble posture. “I hoped it would happen but I wasn’t sure. Now, I’ve got to just keep working on getting better.”

Ortega is really looking forward to the upcoming postseason because not only is he a true believer in his team—having seen it up close and personal for the past three weeks—but he’s also excited to see what he can contribute to the cause. Here’s a young man toting a potent hockey stick and most eager to put it to good use.

Yeah, Ortega is clearly experiencing the dream. Playing for his hometown club, beginning to make his mark as a pro and knowing that this is probably just the beginning. The dream is pretty damn good right now but what’s even more tantalizing, it figures to get a whole lot better. There may be no stopping Austin Ortega from here on out.