Ortega has become one of college hockey’s best 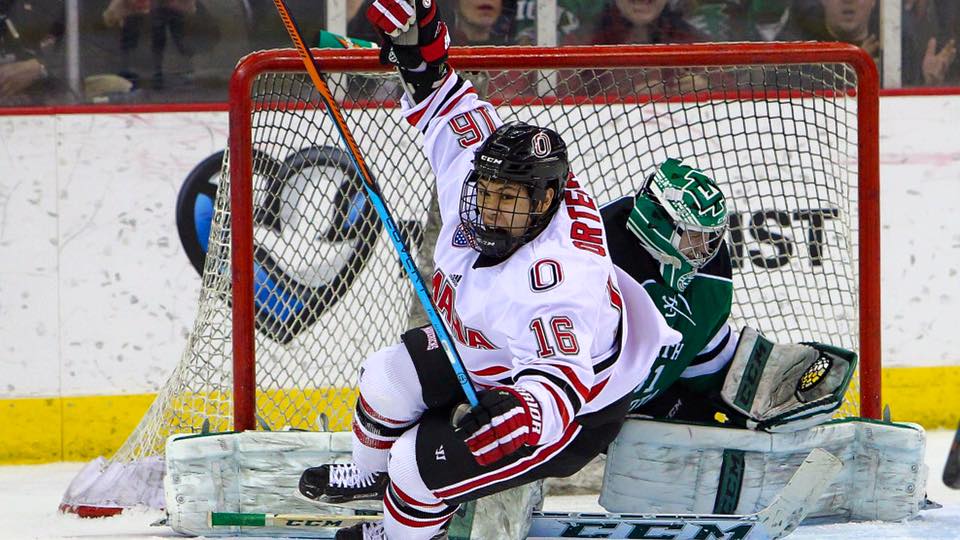 Without really much forethought or intention, Escondido’s Austin Ortega has nonetheless been busting through stereo­types and misguided perceptions for quite awhile. And the vehicle that has enabled Ortega to prove the doubters and naysay­ers wrong has been the game of hockey, a sport that has captivated his soul and at which he truly excels.

On his road to becoming a bona fide standout at the University of Nebraska at Omaha, the soon-to-be 22-year-old has shown that nothing is going to stop him, be it supposed physical limitations, the underestimation that Midwestern and East Coast hockey insiders sometime harbor towards players from Southern California or even the fact that not many players of Mexican-American and/or Filipino de­scent have ascended into the higher rungs of the sport.

With each succeeding year where he continues to produce and shine, Ortega is making it impossible for people not to no­tice his considerable talent. And the truth be told, they already have. Ortega recently received the ultimate recognition when he was selected as one of 66 nominees for the Hobey Baker Award, hockey’s equivalent of the Heisman Trophy and its most pres­tigious individual honor.

Ortega first became acquainted with the sport at the age of five while attending a cousin’s birthday/skating party held at the Escondido Ice-Plex. On an adjacent rink, a hockey game was being waged and Aus­tin and his dad went over to check things out. Almost instantaneously Ortega was wowed, a powerful internal pull taking hold. “I’d never seen anything like it,” he vividly remembers. “It was so different from any of the outdoor sports. I was just fascinated by it and for me, there was an immediate connection.”

Austin beseeched his parents to let him take up the game and within a year he was lacing up the skates. Simultaneously, a star was born. Ortega showed a quick affinity for the game as he moved up through the youth ranks and in-house leagues. And when given the chance to play for the L.A. Hockey Club traveling team, where the competition was of a high-caliber and the opportunity to participate in mean­ingful tournaments was available, Austin jumped at the chance.

Seeking to sharpen his skills even more and wanting to continue testing himself against challenging foes, Ortega then made the tough decision to leave his Es­condido home and move to Colorado at the age of 15. But for his hockey devel­opment to proceed, it was a necessary relocation. Thankfully, the transition was made easier by virtue of the fact that he would be moving in with a teammate and family he knew well.

For two seasons, the transplant played for the Tier 1 Elite Hockey League Colo­rado Thunderbirds, first with the U-16 squad and then moving up to the U-18 unit. Particularly in that latter season, Ortega’s nose for the net began to mani­fest itself.

Next, in his first year out of high school, he stepped up to the United States Hockey League, arguably the best Junior circuit in the country and a breeding ground for would-be college prospects. During the 2011-12 campaign, while skating for Cedar Rapids, Austin began to blossom as a scorer, lightning the lamp 19 times in 59 games. The following season, while splitting time with the Indiana Ice and the Fargo Force, Ortega became even more of a sniper, tallying a combined 34 goals to go along with 60 total points. And in the postseason, the youngster from So-Cal kept right on truckin’ with another eight scores.

Eventually, his winding hockey journey would take him to the University of Ne­braska at Omaha, a place that he’d been eyeing for quite some time. Among the most compelling reasons that Austin de­cided to take his talents to UNO was be­cause of its acclaimed coach Dean Blais, someone that Ortega believed could maxi­mize his game and greatly aid him in get­ting to the next level, that being the pros.

Right from the start, Ortega began mak­ing a strong impression. In his college de­but against Bentley, the nifty right-winger registered a goal and an assist. Later that season, he went into the Mavericks’ re­cord book by scoring the fastest goal to open a game in school history, needing just 11 seconds to get things going in a 6-0 shutout win over Colorado College.

When his sophomore season rolled around, the burgeoning Ortega was primed to break out and boy, did he ever! Joined on a line by his roommate and sweet-pass­ing center Jake Guentzel, Ortega took off and not coincidentally, so did the Maver­icks, the team making it all the way to the Frozen Four before they were downed in the national semifinals by Providence.

For Ortega, it seemed as if everything came together. Augmented by a pinpoint shot, he found the net a team-leading 20 times and totaled 37 points. When he amassed seven goals and two assists dur­ing an eight-game stretch, the feat was deemed so noteworthy that he was select­ed as both the National Collegiate Hockey Conference and the Hockey Commission­ers Association Player of the Month.

But the accomplishment that far sur­passed all the others was when this shoot­er deluxe set the NCAA seasonal record for game-winning goals (11) in a March 2015 game against CC, a stat that speaks to both Ortega’s clutch gene but also his opportunistic nature. And just for good measure, as if to demonstrate he could hit the books with the same impact he wields a stick, Ortega made the NCHC Academic All-Conference team for the second year running.

Ortega’s junior year appeared to be one of great promise, both for him and a UNO team that was returning a bulk of the squad that had excelled the previous season. And at first, things were humming right along, with the Mavericks winning their first six games and ascending to the No. 1 ranking in the country, a first- ever achievement for the program. As of January 7, UNO was still looking mighty good, owning a splendid 14-3-1 record but from there, for reasons that Ortega is still at a loss to explain, the bottom began falling out. The Mavericks experienced a massive freefall and dropped 14 of their next 18 contests, including the season’s fi­Local nal eight. “That was a real disappointment and let down,” Ortega begins. “We had such high expectations, especially with the start we had. We had some really good players. I really can’t figure out what went wrong. It was so unfortunate the way the season ended.”

But though the team scuffled, linemates Ortega and Guentzel didn’t miss a beat, their chemistry continuing to percolate and produce. For the second straight year, Guentzel paced the Mavs in points (46) while Ortega once more was the team’s most prolific shootist with a career-best 21 goals. Ortega is well aware of the unique and special bond that existed be­tween him and Jake. “We just seemed to complement the other’s scoring ability,” Ortega explains. “We just knew where the other guy was going to be or where he had to go. Ours was such a good relationship, on and off the ice.”

Regrettably, and rather sadly for Mav­erick fans, the Guentzel-Ortega partner­ship has been dissolved. In the immedi­ate aftermath of the UNO season, the playmaking Guentzel signed an amateur tryout contract with the Wilkes-Barre/ Scranton Penguins of the AHL, thereby forgoing his senior season with the Mavs. Coach Blais will be hard-pressed to find another such dynamic facilitator to pair up with Ortega.

But even without his good buddy by his side, look for Austin to have a big senior campaign in 2016-17. The 5’8”, 174-pound winger simply has too much going for him to be denied. Ortega is a clever skater who can use quick and shift­ing bursts of speed to create space. As a passer, he possesses enviable vision, which allows him to see big swaths of ice and find the open man. And his two-way game has really been coming on. Commit­ted to being more formidable on the other end, Ortega has made huge strides since his freshman year to be more of a force on the backcheck and in the defensive zone.

And don’t let his somewhat diminutive size fool you. He’s not the least bit hesitant to mix it up in the corners and get physical when it’s required. “I can play a lot bigger than I am,” he warns. And while others have, at times, made his stature an issue, Ortega has used the inferred slight as fuel for his fire. “People have sometimes told me that I was too small and wouldn’t be able to make it at the next level,” Austin says. “Well, all that does is get me to play my game and work that much harder. I’ve proved plenty of people wrong.”

However, despite his obvious skills in other areas, Ortega’s main asset and his ace in the hole will always remain his un­canny knack for putting the puck in the net. His essence can be boiled down to this – he is first and foremost a shooter, a gunner and someone who can bury the disc. “I’m definitely known for my goal- scoring more than anything else,” he read­ily admits.

Armed with a deceptive wrist shot, a quick release and laser-like accuracy, Ortega can be hell on an opposing goalie. Nights can be long when you’ve got Orte­ga bearing down on you, just itching to unload another one of his blurs at the net. And more often than not, Austin’s goals seem to come in clusters, indicative of a player who is quite capable of getting on a roll. And when he’s feeling it, you’d better batten down the hatches because plenty of rubber is going to fly.

Once he’s exhausted his college eligi­bility, Ortega plans on following in Guent­zel’s footsteps, right into the pros. Using a productive senior season as a springboard, it’s hard to imagine this product of Escon­dido not generating serious interest from any number of NHL clubs. After all, he’s got plenty to offer, such as production, a variety of skills and a desire that can’t be denied. “Yeah, I definitely intend to play at the next level,” Austin says firmly.

Based on what’s he achieved up to now, you’d be a fool to doubt him. Austin Orte­ga figures to be making an impact on the ice for many years to come.