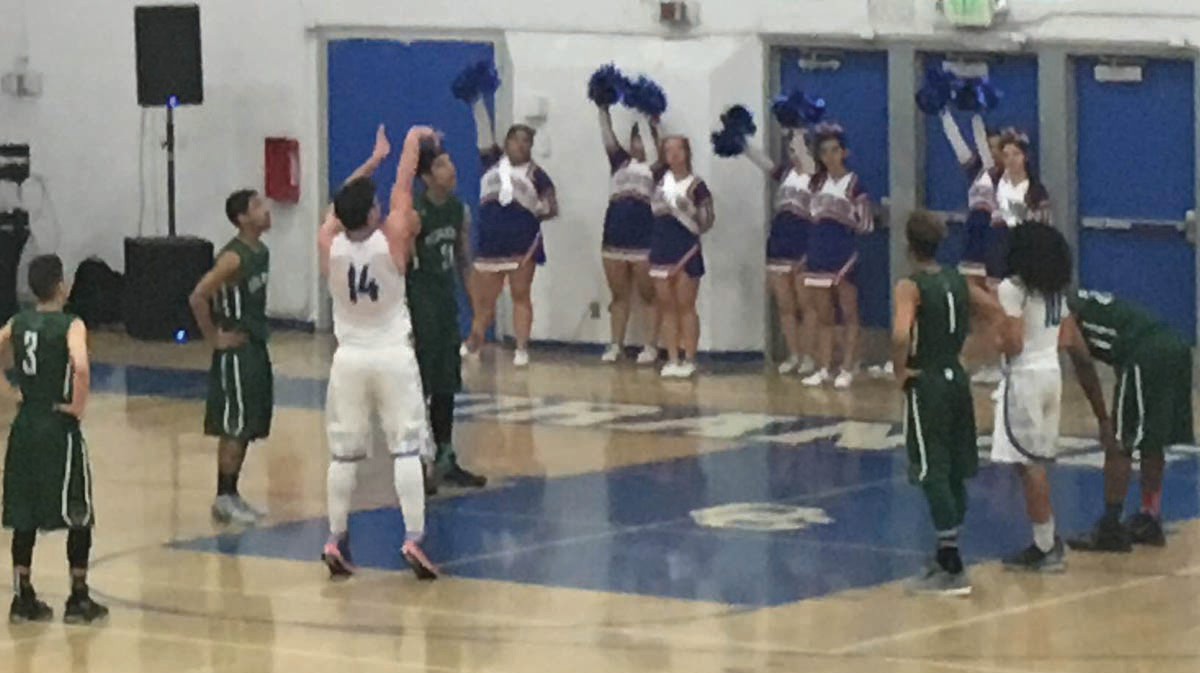 Pulling out to an early lead against the Pirates (10-14, 4-4 in Valley League) and leading 34-21 at halftime the Patriots lacked the steel to hold on down the stretch, being outscored 22-10 in the fourth quarter and eventually losing 85-77 in double overtime.

For head coach Chris Featherly, the game played out in a pattern he’s seen all too often this season.

“Inconsistent. It’s been like that all year. Missed layups, missed free throws, can’t get stops when you need them.“ Said the coach in his seventh year at the school, “I don’t feel we have the mental toughness right now to finish and close out games.“

The Patriots were still a seem­ingly comfortable margin ahead with the time ticking away in regu­lation but a mixture of hard-fought interior points and wide open 3’s by the Pirates pushed the contest to a one-possession game in the final minute.

A dashing rebound and put­back by Orange Glen point guard Damien Miller gave the Patriots a 3-point lead with 15 seconds left. After a timeout, Oceanside’s Em­manuel Grandison worked to find the corner and drained a three to tie the score at 62, the first tie since 2-2 one minute into the game.

Guard Michael Diaz had a chance to win it for Orange Glen as the clock went to zero but his effort came up short.

Both he and “younger” identical twin Devin played a significant role on the 2014 CIF Division 4 champi­onship team as Freshmen. Michael finished the night with 21 points while Devin was inactive and he is still dealing with a sprained knee that has hampered his season.

The home atmosphere was strong for Orange Glen with the near 300-person crowd propelling the team as the game continued. Stu­dents were decked out in neon col­ors for the morP dance later that night and had a DJ spinning during breaks to keep the intensity going.

“Our crowd has been great. They’re loud and support us all the 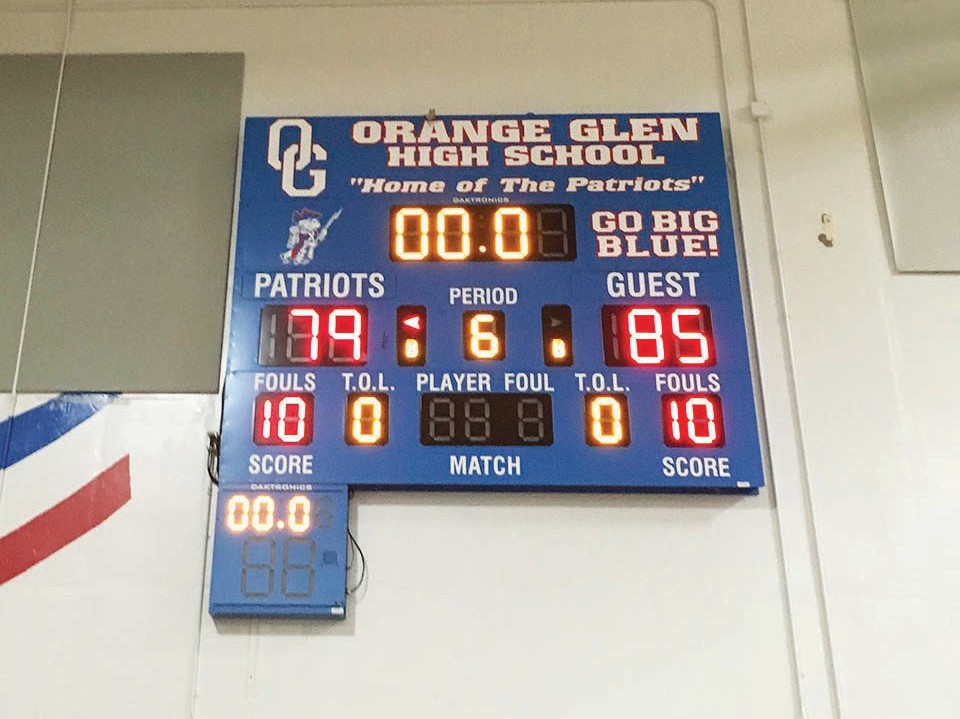 The final score reflects that the Orange Glen-Oceanside was, indeed, a high- scoring barn-burner.

way until the end… we call them our sixth man. I feel bad that we couldn’t pull one out for them.” said Featherly.

The Patriots went ahead again in the first period of overtime before foul trouble forced some of their best defenders onto the bench for key moments that included Oceans­ide guard Jacob Camargo’s 3-point­er that forced the game into its sec­ond overtime.

Oceanside was able to pull away in the extra four minutes, making intentional foul free throws when needed and contesting Orange Glen’s shots at the other end.

“The other team came out and they played harder than us, they did everything they could to win the game and we didn’t come in smart. We made a lot of bad turnovers and just had some dumb mistakes.“ said 6’7 Junior forward Gabe Macias. Macias was also a member of the 2014 CIF team and last years 22-9 league champions.

“We need more leadership, we need guys to step up in clutch situa­tions. I’m just not seeing that out of our guys right now.“ said Featherly.

This years team only features two seniors compared to the five on last year’s semifinal-reaching side. The back-court Diaz brethren know how much leadership can help inspire a squad from that CIF run.

“In 2014 when we hung up that banner there wasn’t a day in prac­tice when we didn’t go hard.“ said Michael Diaz.

“Every day in practice they (se­niors) pushed us to be the best we can,“ said Devin Diaz.

All is not lost though with the Patriots having a final opportunity to solidify weaknesses and battle- harden themselves before the post­season in the coming games against Valley Center on Wednesday, Feb. 17 at Valley Center (16-10, 3rd in Valley League) and Friday, Feb. 19 at the league-leading Ramona Bull­dogs (22-4).

Possibly being a 12 seed or low­er for the playoffs, the stretch of games away from home could prove to benefit the Patriots. Orange Glen is 6-7 at home this season while having a 5-1 away record.

“I think it would probably be bet­ter for us to just get on the road and not be playing in front of people. Get some guys playing more for each other and not for a crowd,“ said Featherly.

For the players, the feeling is mu­tual.

“We don’t have pressure right now. We need to look at it like we have an opportunity to shock the world right now,” said Macias.