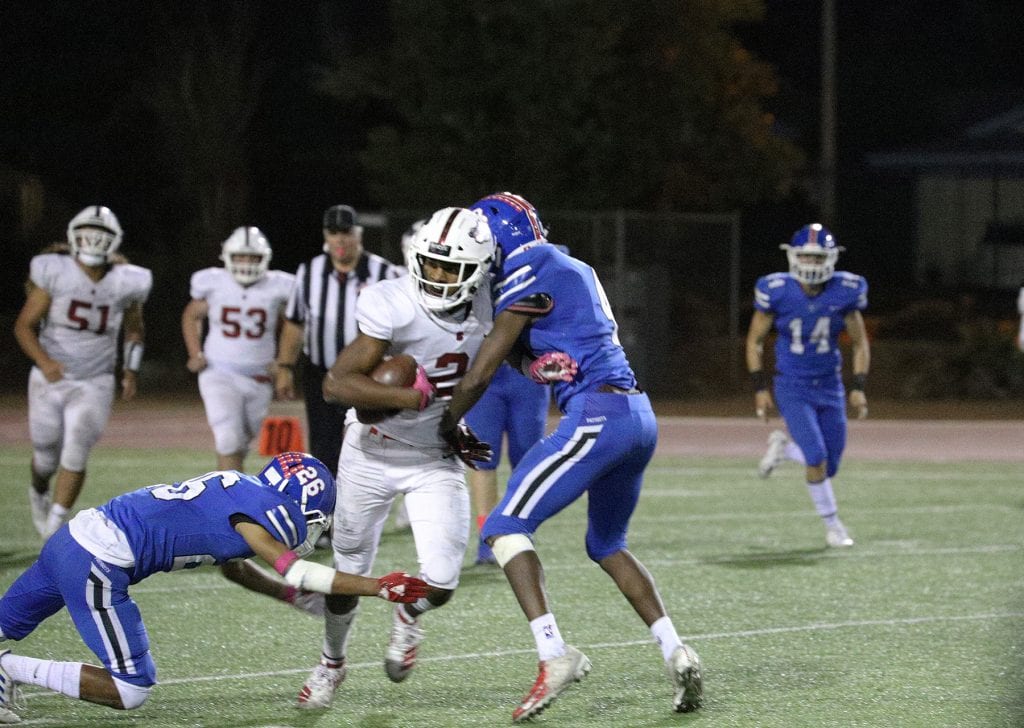 OG defensive back Eduardo Lopez (26) combines with a teammate to bring down Caiman wideout Maximus Brown. Photo by Cara Brinkman

It may not have been an absolute must-win scenario for the Orange Glen football team but if it wasn’t, it was damn close!

In real need of a victory after having lost three out their last four games and coming off a lopsided 73-32 defeat to powerhouse Bishop’s the week before, the Patriots were fully aware that a turnaround was imperative if they were to make this season anywhere near the success they hoped it would be.

And rising up at a most opportune time, the Pats appear to have gained some real traction with their 40-23 Homecoming win over local and Coastal rival Classical Academy last Friday night. With this timely victory, OG improved its total record to 3-4 while leveling its league mark at 1-1.

As for the Caimans, they saw their seasonal slate drop to 4-3 with the end to a notable three-game winning streak. Like OG, Classical now stands even at 1-1 in the Coastal standings.

Though the overall results hadn’t exactly been what he was expecting, OG head coach Jason Patterson wasn’t about to panic about his club’s status. Being the steady and exceedingly positive man that he inherently is, Patterson was far from being down on the Pats because he had seen enough in spurts and flashes to believe that they were on the verge of putting it together and perhaps going on a run.

And based upon their performance against Classical, the Pats seem ready to justify the faith and confidence that Patterson has in them.

Jumping out to a 28-15 lead at halftime, OG salted things away with a 12-point third quarter that was more than enough given the fact that the Pat defense would hold the Caimans to just eight points after intermission.

In a word, the Patriot offense rocked. Stellar running back Cael Patterson was his usual rampaging self, rushing for a massive 255 yards, averaging over nine yards per carry and scoring four touchdowns on the ground. And perhaps just to demonstrate his conspicuous versatility, Cael also grabbed a scoring pass as well.

Meanwhile, quarterback Ethan Villalobos was efficiency personified, clicking on seven of his nine passes, two of which went for TDs. And then there was exciting wideout DJ Harris, who looms as a threat whenever he gets his hands on the ball. On this productive night, the speedy senior latched onto eight throws that he neatly converted into 127 yards and a score.

And the defense, which rose to the occasion and shut things down when necessary, did more than enough to merit its share of plaudits.

In the secondary, junior Derrick McCullough was a big factor with seven stops, a tackle for loss and a pass defensed. Also making an impact on the back end was the ever-reliable Dylan Ewing- Villalobos, who plucked off a throw to go along with his six total tackles.

But there was still more to come from another pair of DBs. Solid Eduardo Lopez made a mark by getting in on seven tackles while senior Kieran Villalobos had his moment in the sun with a nice pick.

And hey, you can’t talk about the OG defense without mentioning their fiery linebacker Julien Lesa, who led the way with five solo stops and a tackle for loss.

Finally, there were two other noteworthy contributors in down lineman Mason Boulais and Jose Riviera, each of whom got after it with a pair of quarterback hurries.

The question that now must be asked is can the Pats use their triumph over Classical as a springboard to a strong regular-season finish prior to the playoffs? With an upcoming road game this Friday night against Maranatha Christian (2-5) in which they will be considered a definitive favorite, the prospects for continued success seem promising.

Maybe the Pats just have to consider every game from here on out as being of the must-win variety. When doing that, it appears as if they positively respond and get the job done.