One escaped monitor lizard grabbed, one to go 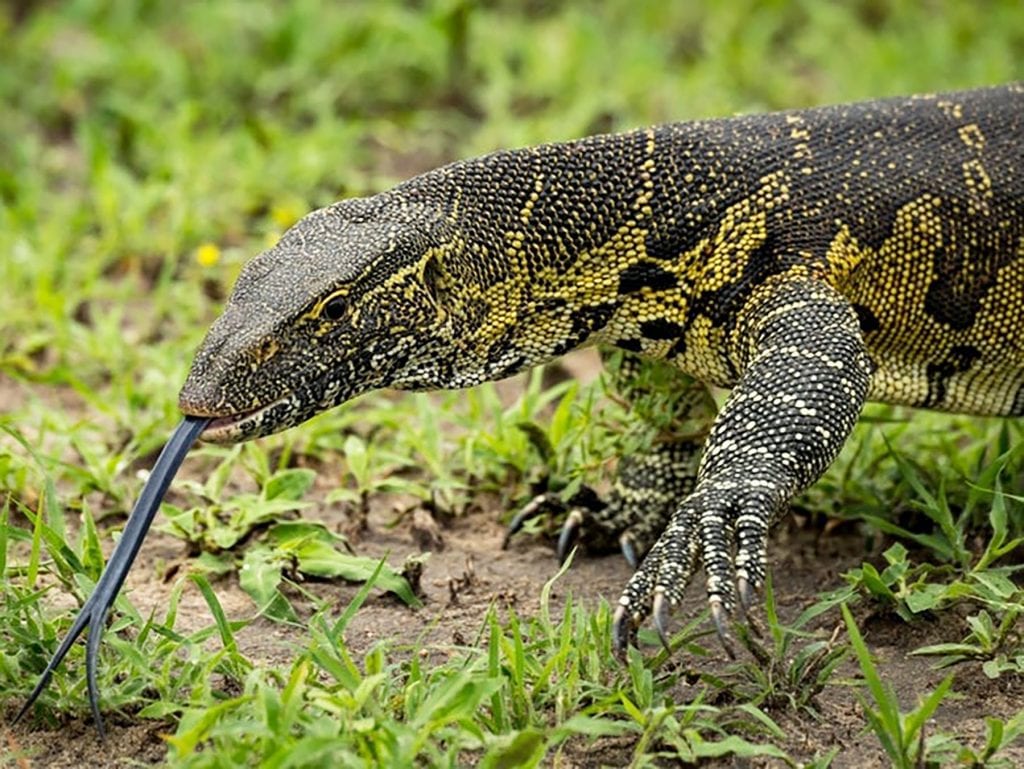 Two monitor lizards who have been on the lam in Escondido for about a year have been reduced to just one after Susan Nowicke of the EcoVivarium reptile museum and her crew captured the smaller  of the two several days ago. The larger specimen remains at large.

“We’re assuming they were somebody’s pets and they turned them loose,” said Nowicke, who said they had been roaming around an area that has a pond stocked with fish and turtles in the area of Ash near El Norte Parkway. “It was a pretty sweet set up for them,” she said. “It’s kind of ideal for them.” She and her crew were quickly able to find the remains of turtles and other prey and determine where they were roaming.

There are gated communities nearby, although Nowicke didn’t want to identify them to keep looky-loos and would-be reptile hunters from trespassing.

The climate is pretty similar to where the lizards come from, e.g. Africa, Asia and Oceania.  Nowicke said it is unlikely that someone would run into the remaining monitor lizard unless they were crawling around in a storm drain. “Hopefully, no one would be doing that here,” she said.

The monitor lizard that they caught was the smaller of the two. “The larger one is still on the lam. We’re hoping it’s another male. The last thing you want to see is a male and female.”

The EcoVivarium was recruited by one of the neighborhood associations about a month ago and asked to hunt the monitors. “At that point they had already had a bunch of people cruising through their neighborhoods,” she said.

The monitor lizard is NOT a good pet. “They are not a beginning animal,” said Nowicke.

They are not extremely dangerous, although they have a nasty bite. “Even exhausted they would try to bite,” she said. “They are not poisonous, but they have claws that are very sharp because they are great at climbing. If they hit you with their tail it can leave a nasty welt.”

When Nowicke goes monitor lizard hunting she takes along one, and sometimes two, staff members. “We got out and we know the areas where they hang out,” she said. “We walk the area to see if we see any signs of them. They have been known to hang out on certain trees. We check on that with binoculars. Ideally it will be like the other one that we captured by flat out wearing it out. We kept it swimming until it was tired.” She added, “They can hold their breath thirty or forty minutes. We kept it swimming until finally it surfaced a foot behind me. I grabbed it and brought it ashore.”

This three-foot long specimen now has a permanent home at the EcoVivarium. “They are a species of monitor that is sadly purchased by people without doing homework. They are a handful and a half to train. It takes someone skilled with monitors to teach them. It’s not an average household pet in the reptile world. They are a difficult species to work with.”

Nowicke is the president and executive director of EcoVivarium, which is located a t 136 S. Juniper Street and is open Wednesdays-Sundays, noon¬–5 p.m. If you visit, you’ll be able to view the newly acquired monitor lizard, who now has a permanent home.