On-Board Gaming: Where everybody knows your name 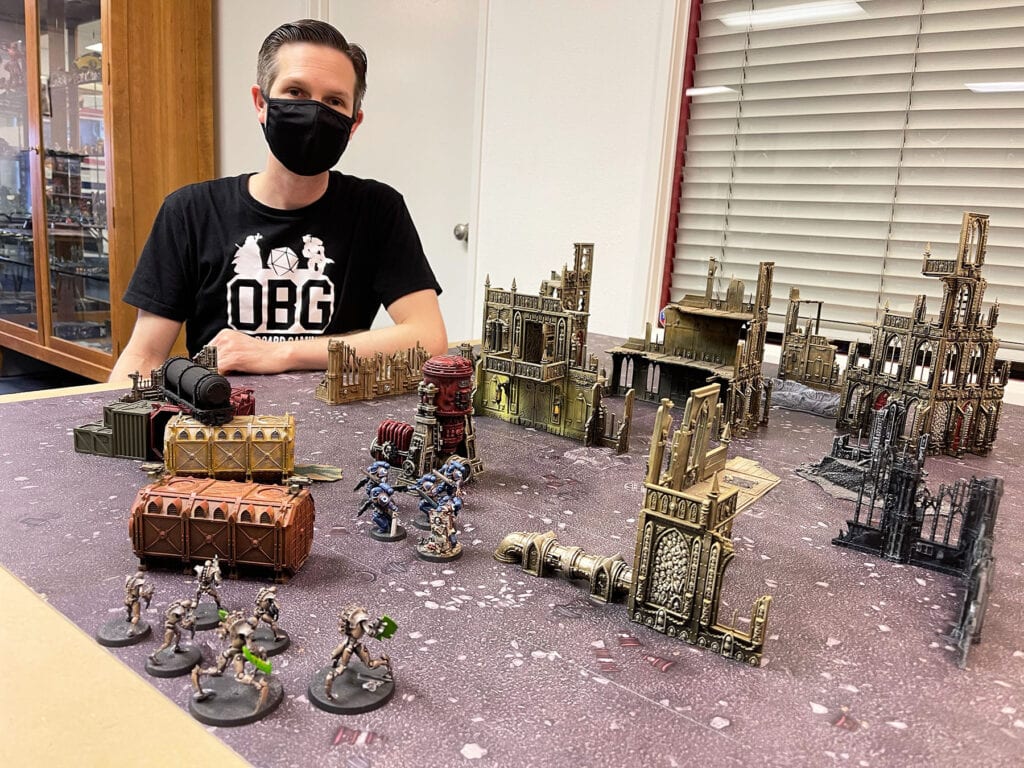 OBG co-owner Eric Petersen and a Warhammer set up.

Want to play big board games, or roll-playing tactical games, but don’t have room in your home?  On-Board Gaming in Escondido has the room. And the equipment. And the know-how to set you up—even if you are a newbie.

Their motto is, “Everything that you need to game your heart out.” They are located at 316 W Mission Ave Suite 117, just a few doors down from Harbor Freight.

I visited On-Board-Gaming (OBG) last week and met co-owner Eric Petersen, who set me straight on a question that occurred to me: Is this store any relation to Games on Grand that operated on Grand Avenue for several years?

No, said Petersen, but in a way that now defunct business was the seed for this one. That’s because he used to be a faithful customer of Games on Grand and has long been a player. So it was natural for him to open up such a business himself once his favorite closed. OBG opened in October. 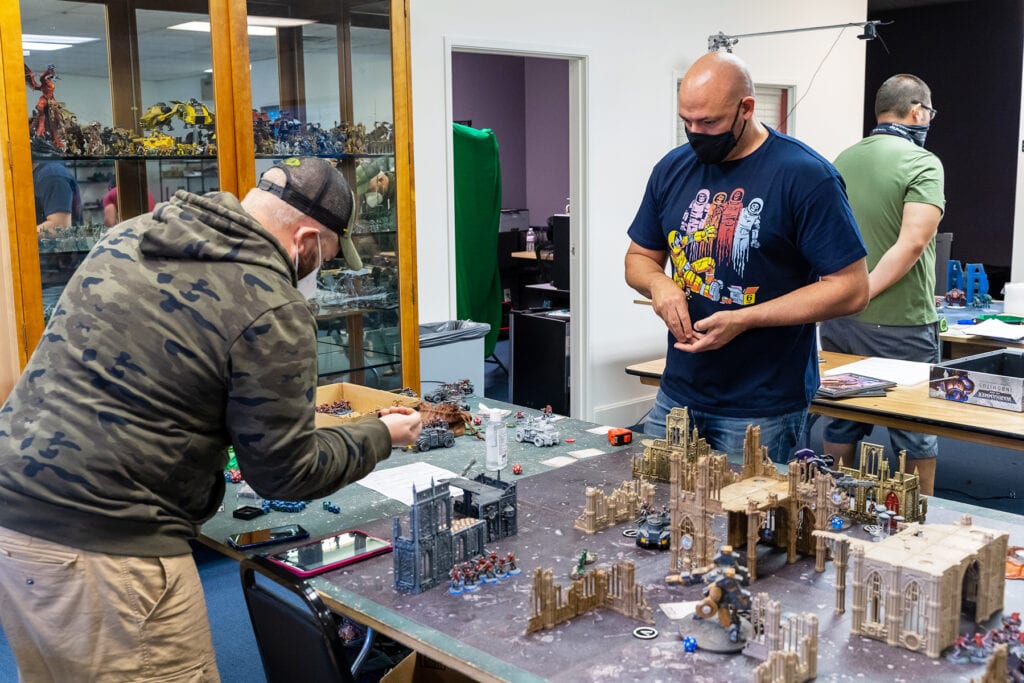 “I started playing Warhammer in the early 2000’s,” said Petersen, who used to play on tables at his house or at friends’ homes. He collected pieces for it and also made some of his own.

“I never really went to a store to play,” he recalled. “I didn’t play at a store until Gaming on Grand opened next to my work.”  He got some games going, recruiting interested friends to join him. He took charge of running several Warhammer charity events, one such raising donations for a food drive.

“We really built up this community of players,” he said. “People tend to gravitate where their friends are. You don’t really have to put a sign up.”

Petersen and his Warhammer group have a Facebook group and discuss games on a Discord Server, an instant messaging digital distribution platform designed for creating communities. For them, it functions like a chat room and they share game stories and photos.

As you can see from the photos, the maps can support just about anything you can imagine. “Some you buy from the manufacturers. Some talented souls make their own. Some 3D print them. Or you can buy them from us,” he said. There are cities, forests and mountains, all ready for armed squads to battle over. Warhammer battles take place in the future.

Some miniatures are fantasy; some are Star Wars.

Like Games on Grand, On-Board Gaming does Dungeons & Dragons (D&D) and card games such as Magic The Gathering and Pokémon. 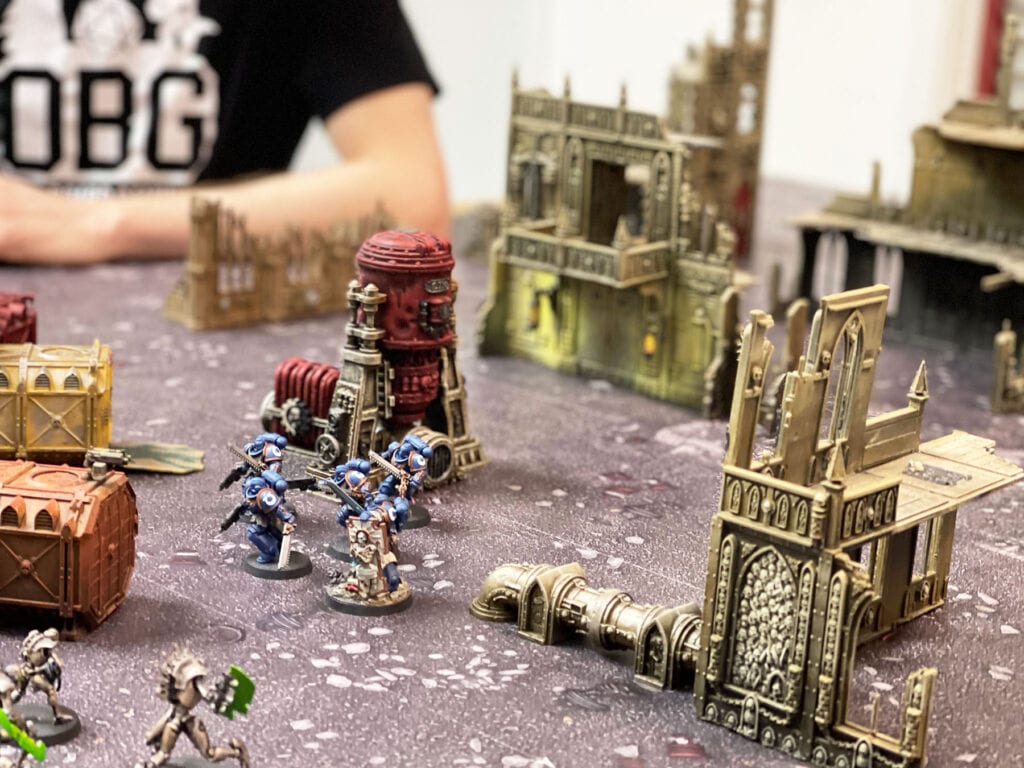 A close-up of a Warhammer cityscape ready for house to house fighting.

Although the store sells everything you need to get involved in any of these games, many of its patrons makes their own and bring them to the store to play (all practicing safe, masked, social distancing.)

Such a game surface typically takes a table eight feet by four feet, although some are 4X6 feet. Some of the games are X-wing, an air-combat game, Blood Bowl a fantasy football game involving orcs, elves and trolls—and other fantasy adventures.

“Setting up a four by six game is not something everyone can do,” said Petersen. “I know I can’t.” That’s where the store comes in.

Gamers patronize it because it provides them with a place to pursue their entertainment. “You don’t go to a bar because you can get drinks cheaper there. You could always drink cheaper at home,” he said. “You go there for the company. It’s really like a place where everyone knows your name,” he says, referencing the classic TV show “Cheers.” He added, “It’s a nice feeling.”

He adds, “Our customers choose to buy things here because they want us to succeed.”

They have adapted to the COVID-19 environment by also offering an online store. People can also take advantage of curbside deliveries and the store also delivers.

Members of their community can watch the games streaming on Twitch.TV and on YouTube. Members provide commentary like personalities on ESPN, although the audience isn’t quite as large. 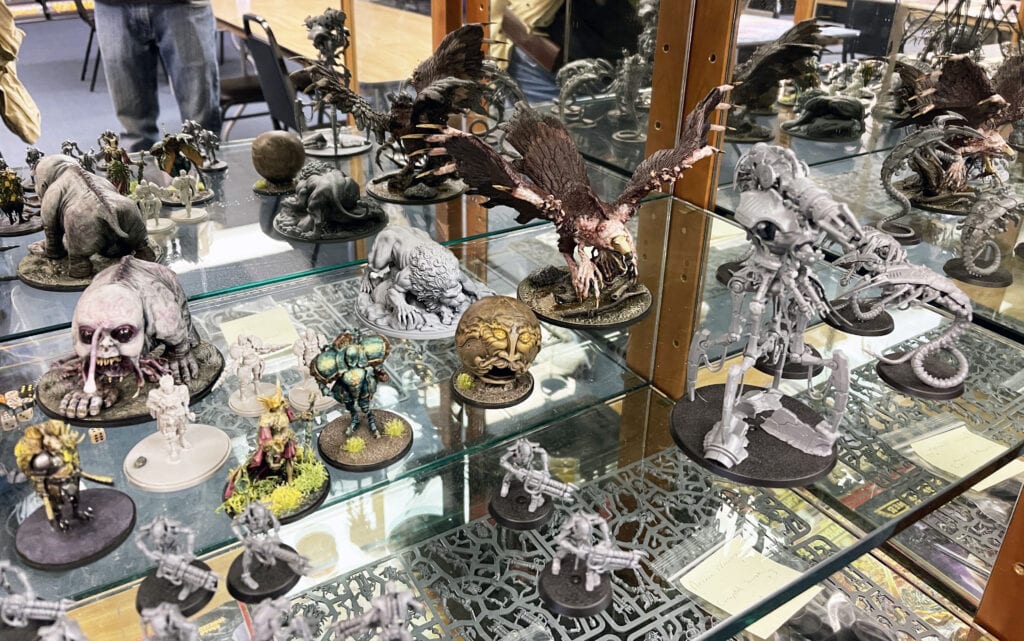 The fun never ends with this nightmarish hellscape of fantasy and science fiction figures straight out of Lovecraft.

Games can last as long as three hours, although 90 minute games are also quite common.

The store does not facilitate or put on the games, except for providing a place where they happen.

Petersen told The Times-Advocate, “I want people to know that we have a place here for the community and we will facilitate what they are into. Sometime someone wants to do something and they need to build a community. We will make that happen. Our community members are very helpful.”

Don’t know how to get started? “We will get you going with what you need to do it,” said Petersen. “Some people just come in to see the figures.”

Although I only spoke to Petersen, some of the other owners (and their specialties) are listed below.

If anyone is interested in more info on On-Board Gaming or want to learn a new game, here are links: 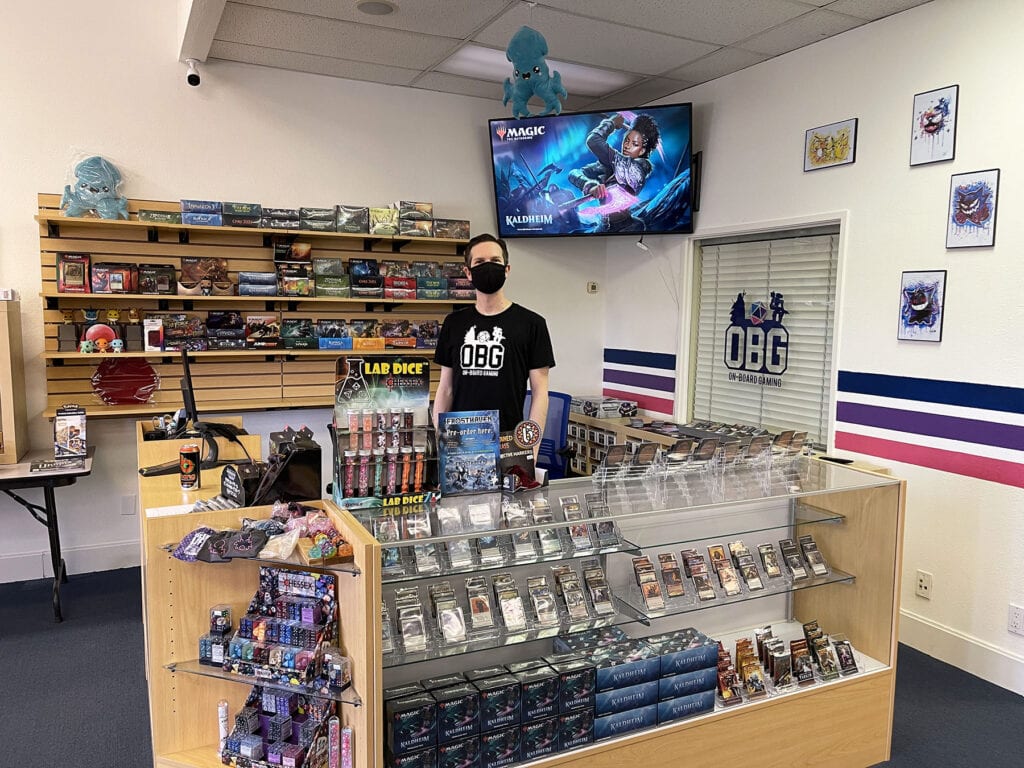