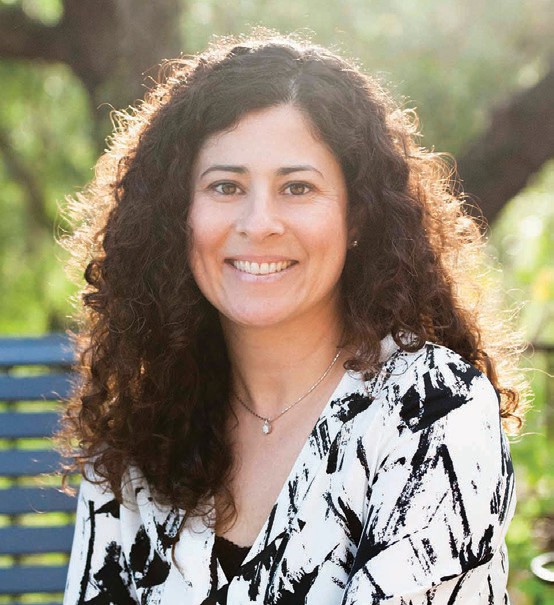 I met Escondido Council member Olga Diaz on a cool October morning at the Esco Gelato, a sidewalk cafe on Kalmia near Grand Avenue that was formerly called the Blue Mug, a coffee shop she founded ten years ago. It was a location where she developed the contacts and a headquarters where she used to discuss the issues that inspired her to enter city politics eight years ago. She also used to freely discuss local civic issues on social media.

Two years ago, after she lost a campaign for mayor with Sam Abed in a landslide, Diaz publicly flirted with leaving politics, something she felt quite disillusioned about at the time. Today — she feelS — she is needed on the council, because if she isn’t there, the point of view she champions will be completely eclipsed and the council majority will never hear a discouraging word.

She has lived in Escondido since 2001 and started the old Blue Mug in November of 2002, operating it for about ten years. She also started a second Blue Mug at 2nd & El Norte Parkway. She no longer operates either coffee house. Instead, she is director of student success and equity at Palomar College.

In an interview with the Union Tribune shortly after losing the race to Abed in 2014, Diaz described how she had never intended to be a “politician.” “I’m involved in the city,” she says in reference to that article. “But I never really thought of myself as a politician. I’m passive about asking for support. It’s not natural for me to blow my own horn.” Since that interview was published she has concluded that the good that she can do on the council is worth the battle to retain the seat and to seek the support of the public. Even if seeking public support doesn’t come naturally to her.

She has also concluded that her eight years on the council constitute something of a master class on how things are done in this city. It is experience that shouldn’t be dismissed lightly, she says. “I like the idea of doing good work and learning how to accomplish things. I have discovered that is not the same thing as learning how to campaign for office effectively.”

She admits that she took a stand that politically harmed her when she was running for mayor — but she still feels she was right. She was doing well in that election in 2014, and, she says, pulling ahead of Abed when she decided to support Prop. H, the Escondido Country Club initiative that would have made it possible to build as many 430 homes in the Country Club area. “I took what I thought was a principled stand on the Country Club,” she recalls. “Then he pulled ahead. I felt I was doing the right thing even though it meant I wouldn’t win.”

At the time, she says, she studied the legal issues of the proposition and concluded that, even if it was defeated, the city would still lose the issue in court because not allowing any development at all violated the constitutional rights of the owner of the Country Club property, Michael Schlesinger, of Stuck in the Rough.

“I didn’t want to put the city in financial and legal difficulty of defending that proposition,” she says. She feels she was vindicated by subsequent events — particularly when a judge ruled against the city and for Schlesinger.

“A compromise was required by both sides and I felt I was borne out by the facts,” she says. Diaz recalls challenging the city attorney and asking him if he would spend the money to defend the city’s position if it was his money. “It’s not monopoly money we are talking about,” she says.

Diaz is not anti-developer or pro developer. Development is part of the mix of tools needed to improve the city, she believes. She favors redeveloping some of the older neighborhoods of the city that were built up before the city began requiring master plans. “We didn’t know then what we know now,” she says. She would also like to see a master plan for the land once occupied by the old Palomar Hospital — land still owned by Palomar Health.

“That land is for sale,” she observes. “It’s not likely to stay as a medical use because the medical offices are migrating over to where the new hospital is. I’d really like to see something fabulous done with that land. There are parcels that the city owns that could be cobbled together to create some between fifteen to twenty acres to create something amazing.”

“I’d like to see a redesign of East Valley Parkway,” which, she says, looks very old fashioned and unattractive in many commercial areas, such as the mall that has grown up around JoAnn’s and the various businesses there, which are all individual owned.

“What I’ve learned in office,” she says, comparing the experience to a graduate school course, “is the result of experience that I would hate to waste.”

Diaz frequently finds herself on the losing end of 4-1 votes, and sometimes feels that the mayor takes it personally when she questions or doesn’t jump on the bandwagon of his agenda. “I’m not attacking his character if I have a different viewpoint, although he acts like I’m attacking him,” she says.

She likes to think of herself as a council member with “a big vision.” But she is happy when other council members show that they have “big vision” too— and doesn’t mind not getting credit for her big ideas, as long as they are implemented. She was “shocked and impressed,” several months ago when councilman John Masson floated the idea of a big state-of-the art municipal library campus next to city hall. It was an idea she had championed for several years, without gaining any traction, she says. “It would have been nice to have done it eight years ago but I’ll still take it. If it took John bringing it up to get the board behind it, I’ll still take it!”

She adds, “I’d love to have a state-of-the art library. I’d also like to have a library that is open seven days a week so that everyone can use it.”

In her own district she would like to develop more city parks. Currently there’s only one: Mountain View Park. “It’s a really nice park, and I’m over there all the time, but I’d like to see some urban redevelopment that would add more parks at the east end of town,” she says.

She has also become known as a staunch champion for developing the Escondido Creek, a concrete-lined creek that runs through the city, as a linear park. So far, a couple of small pocket parks have been developed along this city-owned land, but she dreams of a park that runs along its entire seven mile length. That land is not far from the old hospital site. She envisions combining the two. “We could make a wonderful gateway to the city — a catalyst project that could set up Escondido for the next hundred years!”

She adds, “There’s a lot of work to do,” she says, “and no one does it like I do. They need me on the board to provide depth.”

She also represents a constituency the other members do not. “I’m the only woman, the only Latina, the only environmentalist. I feel responsible for making sure those viewpoints are considered,” she says. “If I’m not there I don’t see that happening. I think the council would change drastically if it didn’t have someone from that viewpoint.”

Another viewpoint she champions is that of compassion. “We need to think more about homelessness and urban blight,” she says. She used to work for Interfaith Community Services, helping people who needed jobs.

“That is a heartbreaking job,” she recalls. “As a societal issue, it’s not something that Escondido can do alone. But it’s inhumane to give people those kinds of choices. We turn our backs on that issue. As a practical person I know that you can’t force people off the streets, but we need to come up with a better solution.”

She was critical of the mayor’s policy that called for requiring non-profits, like Interfaith, to pay full freight for city property — rather than the “dollar a year” leases that were in place for several city locations. As a result, Interfaith, for one, closed its “sobering center,” on Spruce Street. This, she believes, added to the city’s homeless population. “That location is still vacant,” she observes. “Now the city doesn’t collect anything on that property.”

She recalls a bumper sticker that said, “Dissent protects democracy,” and sees herself somewhat in the role of providing dissent for the council on many issues. “In a democracy it is desirable to have a variety of different approaches. I think I bring balance.”

To find out more about Olga Diaz, visit her website: www.olgadiaz.com/