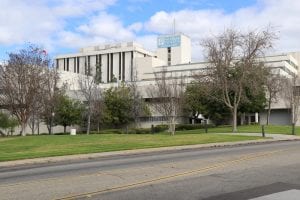 Do you live west or east of the hospital? Can you see it from your house? For many years residents have used the multistory old Palomar Hospital (The tower has nine stories and the main part of the hospital has six) as a landmark for orienting themselves. Lots of people, like me, either left their appendixes there, or started life there. Many ended their lives there.

For decades the City of Escondido’s most iconic structure, the anchor of the downtown, and the most visible part of the city from any vantage point you could find, the hospital has been there for more than 67 years. Now it has been sold for $18 million and the skyline will never be the same again.

The sale of the old hospital, which closed all of its facilities in 2015, and, more importantly the 14 acres on which it sits, was announced on Thursday by Palomar Health. The sale price is $18 million, and the buyer is the residential home builders, Integral Communities.

The building, which was closed as a hospital because it no longer met California earthquake standards, will be razed. Under the mixed use plan envisioned by the developer, about 1,000 units could be built there.

Nothing will happen for 15 months, however. Palomar Health will keep the building for that time as it finds other locations for services still operating out of the building. They include: Behavioral Health consisting of inpatient beds and Crisis Stabilization Unit, Radiation Oncology, Acute Rehabilitation, Inpatient and Outpatient Lab, Infusion Therapy, Ultra Sounds, maternal fetal care unit, Inpatient pharmacy.

The hospital district has been transitioning from the old hospital to the new $1 billion Palomar Medical Center since 2012. But no one has known, before now, what was in the cards for the 14 acres, considered the most prime real estate in the city.

City officials have greeted the sale to Integral with some enthusiasm. The city already has a relationship with Integral, which is developing the old police station property at 700 West Grand Ave., across the street from the Escondido Transit Center.  It’s likely that something similar is planned for the hospital property. We reached out to Integral on Tuesday but at press time had heard no comments back.

City planners have long sought a developer for that key part of the downtown and help in the revitalization of the city’s oldest business district.

At one time, before the Great Recession, the city envisioned a development that was more commercial-centric. “That’s now irrelevant,” said Michelle Geller, the city’s economic development manager. “It’s not relevant because we aren’t wanting to cannibalize our merchants on Grand Avenue and because of the shortage of residential housing.” The city would like to see market value homes, just not homes in the million-dollar range, she said.  “We would like to see more customers on Grand Avenue. And the more high density we have downtown, that’s going to bring that 24/7 base to that area. I think our businesses would hope to see that as well.”

It will also be the largest residential development in the city, Escondido Mayor Sam Abed told the Union-Tribune, in a story that broke on Tuesday. The U-T quoted him as saying, “It’s going to be the largest urban living development in Escondido and I think it’s going to be great for the city. We need qualities and amenities that will attract people with good median incomes to come and live and spend time on Grand Avenue and in downtown Escondido.”

Deputy Mayor John Masson told The Times-Advocate: “I’d like to see condos with really nice amenities.  Mixed use could work but I’d rather focus on housing and let the retail and restaurants locate on Grand Avenue in vacant or under-utilized properties.”

Councilmember Ed Gallo hailed the sale. “It’s been a long time coming. I like the concept. I think if it is possible to include an employment center that would be good. But that’s up to them. They are one of the largest builders in the nation for some reason, and that means they don’t make mistakes. We like what they are doing at the Gateway [the old police station.] We are careful what we allow to be put in there.”

Gallo, who serves on the North County Transit board, likes the development that Integral did along the Sprinter line in San Marcos. “It’s good to have it next to the rail line. It makes it easier to commute. I’m just happy that Integral has enough confidence in this city. There is a lot of work to be done yet. It’s going to be 15 months, but these major projects take a long time to get done.”

Rorie Johnston, executive director of the Escondido Chamber of Commerce, declared, “We’ve been waitin’ a long time to hear those words!”

She added, “I am anxious to see the development plans from Integral Communities. This project is a major undertaking that will create many opportunities for Escondido, from employment to consumers. The historic heart of our city will benefit the most with an influx of people looking for retail, dining and professional services. Escondido has a lot of projects in the pipeline, adding much needed residential space. The city should also experience an increase in its budget from sales and property taxes, which will fund upgrading of the infrastructure that keeps our city humming and, hopefully, the amenities that we all enjoy.”

Chamber board chairman Kevin Svetich said, “We are pleased to learn that a quality mixed use residential and commercial center is planned. The site is considered a key to the future of Escondido’s downtown area and the developments amenities will attract people to live in and to visit downtown Escondido.”

Alex MacLachlan, president of the Downtown Business Association (DBA), commented, “The DBA and downtown merchants have had several discussions on the proposed Aspire, The Ivy, downtown parking garage, and potential Hospital projects, as well as being heavily involved on the Grand Avenue Vision project of re-designing Grand Avenue for better function and consumer convenience.

“We’ve met with Kerry Garza of Touchstone publicly, so we’ve had the opportunity for discussions on a comprehensive vision for downtown and how Touchstone projects could fit into that vision,” said MacLachlan.

He added, “The DBA would want to engage early and often with Integral in this same capacity on the future use of the Palomar Hospital site. What too often happens is 95% of a project design and features are hashed out behind closed doors, and then those most impacted are brought in later to see a completed set of blueprints and colored renderings, as a show of outreach, but not a solicitation of input and feedback.”

MacLachlan concluded, “We have a diverse group of downtown businesses owners with many skill sets that could benefit the overall vision of this future project. There would be great interest among merchants to get this project right, since it would sit at what has been such an ‘integral’ geographic focal point for downtown Escondido. I don’t believe anything less than architecturally spectacular would be acceptable.

Paul McNamara, who is running for mayor of Escondido, told The Times-Advocate, “On the surface, this sale and subsequent proposed development is a big win for Escondido.  But good projects are only good if the leadership of the city ensures the details such as cost, impact, and test of time are thought through. The current city leadership track record leaves a lot to be desired.  Our downtown small businesses have needed development projects like this one for a long time, and so I am optimistic.”