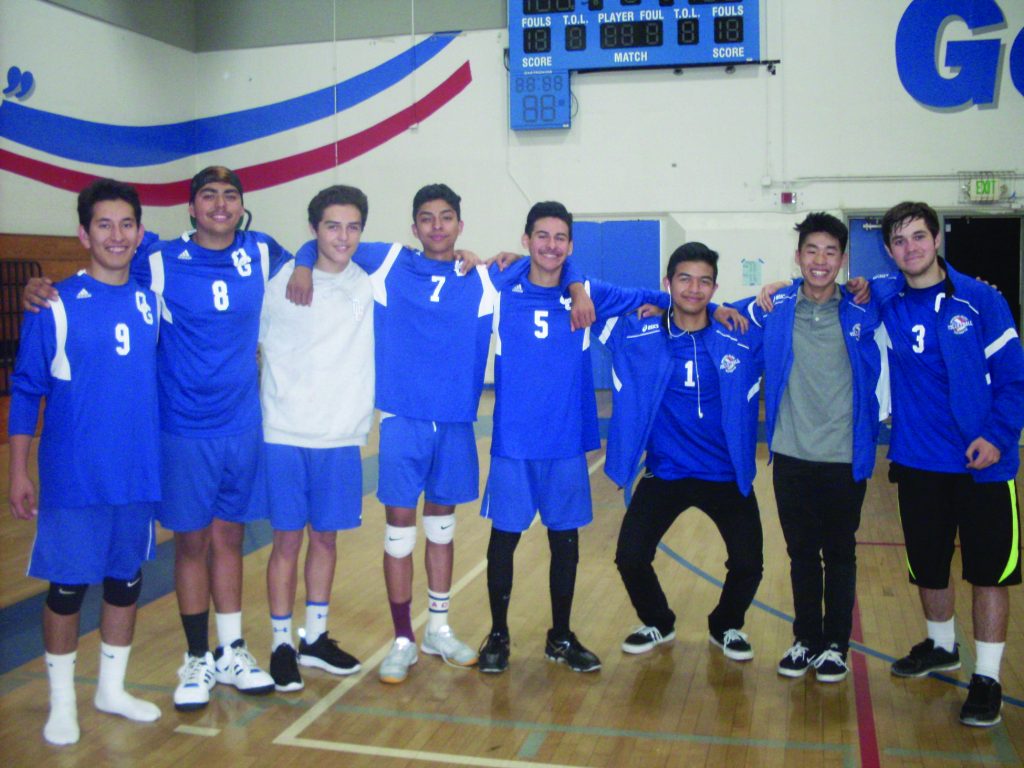 The highly competitive Patriot boys volleyball team is on the verge of a league title. Photo by Brittany Aellig

Although new to the sport, Orange Glen’s varsity volleyball team brings no shortage of passion and determination to the court.  With most of the boys having no more than two or three years of experience, these young athletes are dominating their league as well as their overall record.

At 4-1 in league and 15-5 overall, the boys are drawing near to their goal of becoming league champions.  “We’re doing really good,” Junior Adrian Bernon said.  “We’re close, we only have a couple more games to win and we’ll have it.”  Eager to get their hands on the ball during every rally, they outlast their opponents and work together to constantly increase the gap on the scoreboard.

Tyler Lam, one of the team’s captains and the only player with four years of experience, explained, “we’re all very involved.  Everybody has a job and we all work together to be productive.”  With a group of boys so new to the sport, it is surprising how they have developed such an effective mode of operation on the court.

Each player has discovered his skills and constantly strives to further develop them.  Coach Joanne Lin has worked hard to improve the skill level of the team and is proud of their progress.  “This program is still young but I’ve seen a lot of improvement,” she said.  Even some of the referees have spoken to her about the incredible strides the team has made.  Lin is encouraged by this, saying, “it backs me up that I’m going in the right direction.”

Not only is the learning curve for this team truly astounding, but they have also quickly developed a true love and appreciation for the game.  Bernon enthusiastically admits that joining the team “is the best decision I’ve made in high school.”  For most of the players, it was friendship that drew them to the sport.  Lam explained, “my friends told me to go to open gym and I fell in love with it.”  He has formed a sort of tradition by leading others to join in a similar fashion.

This team has developed through word of mouth and a seemingly coincidental love for volleyball.  Austin Pautin—the other team captain—describes Lam encouraging him to join, “because I was athletic.”  Now the sport is a serious passion of his: “I love it  … it’s my second home.”  While most of the boys never considered joining before hearing about the team through various friends, they have all found a deep love of being on the court.

However each player was encouraged to join, they have combined their strengths to create a truly talented and dedicated group of young athletes.  Pautin explained, “we became a family and we all teach each other and work together as friends.”

Currently standing at number two in the Pacific League, the team has clearly honed their skills quickly and effectively.  Lin assigns their strength as “defense—they don’t give up, they hustle and try to keep the ball in play.”  Most of these young Patriots agree that their best quality is their desperation for the ball.  Lam said, “we’re pretty scrappy with the ball; we always have a hand on it.”  This formidable determination is what helps them to remain strong throughout long rallies and even longer matches.  Whether ahead or behind during a match, they refuse to become lax in their determination to win.  “Even when we’re losing and we’re down a lot in the score we still try to win—we don’t give up,” said Victor Armijo, a first year player.

Regardless of the team’s overall newness to the sport they have risen to a level completely unprecedented.  “When they’re working and communicating they’re unstoppable, they could beat a division one team,” Lin said confidently.  However, the young team is not infallible.

“The problem is that everyone peaks at different times and it’s hard to synchronize that on the court,” she said.  Despite their current record and their shocking successes,  “They’re not very confident.  They have the skills but there’s a lot of self-doubt,” Lin said.

A few of the varsity members struggle to come up with personal strengths, listing their goals and weaknesses as simply “a lot,” as in the case of Armijo.  While the team members are confident in their overall abilities, many struggle to locate how they fit into that success.  Junior Armond Marcial hopes the team can learn to “start hard, play hard, and finish hard,” rather than let their confidence or lack thereof affect their abilities on the court.

The extreme humility of many of the team members especially takes a toll on Lam.  “I really want to see everyone’s confidence boosted,” he said eagerly .  “A lot of the guys are nervous when they play and I want them to be confident.”  The inability to recognize their personal strengths can make it hard to stay positive during games.  While they remain obviously talented, many of these Patriots struggle to recognize their own strengths.

However, the team is aware of this problem and is making serious efforts to eliminate any and all difficulties they have.  They are constantly encouraging one another and shaking off disappointments.

Joshua Lopez plans to work on “communicating more and if someone messes up, keeping them pumped up.”  There is no lack of resolve in their fight to better themselves.  Planning to improve communication, self-assurance, and maintain a constant supply of energy, these boys are sure to make history for Orange Glen.  “We’re still learning and we’ll never stop learning,” said Lin, “and that’s what makes us get better.”