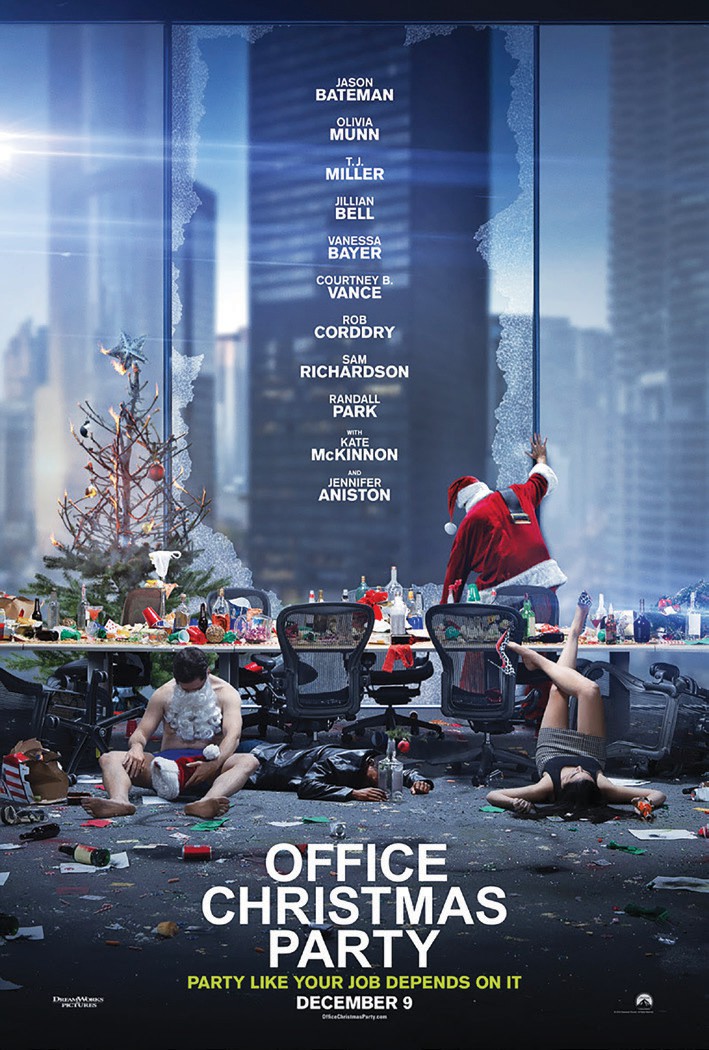 For years, I thought that Jason Bateman, Jennifer Aniston, and Courtney B. Vance all seemed like nice people. I know nobody’s perfect, but I didn’t have any problems with them. Now having seen them in “Office Christmas Party,” I have to assume that they are in fact horrible people. They’re not necessarily horrible because they did this movie, but they’re horrible because of something they did before this movie. They did something horrible and now have to do this movie as part of a blackmail.

The setup is that computer company CEO Carol (Aniston) is ready to shut down the branch run by her empty-headed brother Clay (T.J. Miller) unless he can land major client Walter Davis (Vance). Davis is reluctant to do business with the company because he correctly senses that they have a morale problem. Clay decides to impress Davis by inviting him to a huge Christmas party so he can see that everyone is happy. He enlists CTO Josh (Bateman, giving a particularly disinterested performance) and tech head Tracey (Olivia Munn) to help him. Tracey is game, but Josh would rather just wallow in self-pity over his recent divorce and pine after Tracey. Josh isn’t exactly sold on the idea, and frankly I didn’t get the impression that Clay really thinks it’s going to work. It’s just an excuse for him (and the movie) to throw a wild party and maybe write it off as a business expense.

The party scenes are exactly what you would expect from an R-rated comedy about office workers cutting loose. There’s drinking and drugs and hookups and people going to the bathroom in inappropriate places. This is the kind of movie that banks really hard on you laughing at awkward dancing, lewd misuse of office copiers, and people using loads of profanity when they’re people who shouldn’t be using profanity. And yes, we get the obvious gag where an illegal substance is treated like snow. Such is the kind of cheap joke this movie relies on.

More than being unfunny, this movie is just lazy. Most of the antics and dialogue look like they were invented on the day of filming. There are funny people in this movie, not just the ones I already mentioned, but also Kate McKinnon; Vanessa Bayer; Rob Corddry; Randall Park; Karan Soni; Jillian Bell; Fortune Feimster; and others. But no matter how funny these people are with decent material, they can’t save the lame situations they’ve been given. And that’s when they’ve even been told what to do and not just told that they’re so funny that whatever pops into their head on the first take will be fine. It’s no surprise that there is a reel of outtakes over the credits of this movie. The cast was clearly filmed going through hundreds of poorly-considered jokes and then the editors chose the “best” ones without concerning themselves with getting the “right” ones.

The good news about “Office Christmas Party” is that it goes for such a high quantity of jokes that a few of them have to work. The big names, especially Bateman, know they’re above this material, but many of the lower-tier players are hungry enough that they give energetic performances and compete with each other over who gets to “steal” the movie (my pick is Bell as a pimp who’s out to prove that she’s capable of both kindness and cruelty). But this movie brings nothing new to the “party spirals out of control” genre and it certainly isn’t going to fill you with holiday cheer. Give yourself an early Christmas present and go see something else.

“Office Christmas Party” is rated R for crude sexual content and language throughout, drug use and graphic nudity. Its running time is 105 minutes.