Of Garcia’s breakthrough and Westbrook’s record 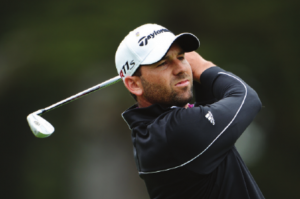 Sergio Garcia finally kicked the door in with a popular Masters win.

A couple of interesting and significant developments took place in the sports world this past weekend. They proved to be stories of great prominence.

So with your kind indulgence, this writer will attempt to provide them with some context and perspective intermingled with my own viewpoint on exactly what went down.

Well, Sergio Garcia finally made good on capturing the elusive goal that has been his Moby Dick-like obsession for all these years, that being winning a major championship. After missing the mark in his previous 73 attempts, the Spaniard at last hit the bullseye—say olé—with a compelling sudden death victory over Brit Justin Rose in last weekend’s Masters.

Garcia demonstrated remarkable shotmaking, tenacity and an ability to overcome adversity in forging a nine-under par score in regulation that sent him into overtime where he efficiently took care of business.

Down the stretch, Garcia was piping his irons with authority and accuracy that kept him in the hunt and put continual pressure on the accomplished Rose, who eventually cracked. And when Sergio cozied in a 12-footer on the first playoff hole for a rather anticlimactic birdie, since a two-putt would have sufficed, his lengthy quest was over and his career had suddenly taken on a totally different dimension.

But that’s not to infer that Garcia, sans a Slam, hadn’t enjoyed a noteworthy career up to that point. Exploding on the scene as a 19-year old prodigy and answering to the colorful name of “El Niño,” Sergio had collected plenty of hardware, winning a combined 22 events on the PGA and European circuits. Moreover, Garcia had been an artful matador in Ryder Cup competition, goring more than his share of Americans while becoming a huge factor into the Euros’ recent domination of that prestigious competition.

Though he’s had his missteps since coming onto the scene such as bouts of immaturity, making a few injudicious comments and a reluctance to sometimes look in the mirror when he faltered, Garcia has always been a genuine, decent and interesting guy.

In the past, however, much of the American press has gone out of its way to make him a whipping boy for their over-the-top venom and wrath. Perhaps some of this animus was due to the fact that Garcia was one of the few golfers who refused to genuflect and kneel at the altar of Tiger Woods, who was and remains God-like to a vast majority of those in the U.S. media.

Garcia had the stones to call out Woods on occasion and there were times when he was absolutely justified in doing so. Truth be told, this reporter thoroughly admired Sergio for not backing down and expressing his viewpoint, knowing full well the torrent of backlash that would be directed at anyone that had the temerity to question Tiger.

Given this background, it was all the more refreshing to watch as the crowds at Augusta embraced his pursuit and made him the clear-cut sentimental favorite. And Sergio rewarded their support with an emotional and determined performance that brought him one of the most coveted prizes in golf.

Making the achievement all the more meaningful was that it occurred on what would have been the 60th birthday of Spain’s late golfing legend Seve Ballesteros, who was both a mentor and inspiration to Garcia. Of all the things that Sergio accomplished on this memorable Sunday, making Seve proud undoubtedly had to be prominent on the list.

Northern Ireland’s Rory McIlroy never really found a rhythm throughout the proceedings and despite a solid 69 on Sunday that elevated him into a tie for seventh place, the dynamic 27-year-old was a big disappointment by not being a factor. Just five strokes behind at the halfway point and neatly positioned to make a move, McIlroy again suffered third-round inertia that doomed his chances. With his immense length and knack for getting hot and going low, Rory should be a beast at Augusta but thus far it just hasn’t happened. The betting line says that McIlroy will someday don a green jacket and complete the career Grand Slam but over the last two years amid the splendor of the Masters, Rory’s results have been far from picturesque.

Going into the final round, not only were American headliners Ricky Fowler and Jordan Spieth  paired together but they were ideally situated to make some noise at five and four-under respectively. Anticipation was high that these two immense talents would push each other to great heights and perhaps even atop the leaderboard. Instead, what transpired was a huge flop. Neither could generate any traction and shockingly, each became an afterthought after carding bloated scores of 76 (Fowler) and 75 (Spieth). To categorize their efforts as being colossal letdowns would be an understatement. 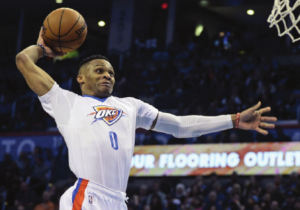 While Garcia was making a most definitive statement down in Dixie, Oklahoma City’s stellar guard Russell Westbrook was creating his own brand of history in the high altitude of Denver on the very same day. As the result of a 50-point, 16-rebound, 10-assist effort versus the Nuggets, the one-time UCLA star registered his 42nd triple double of the year, thereby establishing an NBA record and eclipsing the previous longstanding mark of all-time great Oscar Robertson.

It would be insanely myopic and beyond foolhardy not to pay testament to this tremendous feat. To deny that Westbrook is a spectacular talent and one of the world’s best would be to lose all credibility. But Westbrook’s accomplishment does come with a few qualifiers.

First and foremost, he’s a compulsive gunner and to put it not so subtly, he’s a ball hog. Check out the stats and you’ll be blown away by the realization that Westbrook has taken well over a staggering 300 more shots than anyone else in the league. Some would argue that he must adopt this often selfish posture in order for his team to compete and survive but I don’t totally buy into that contention. No matter what others may think, OKC is more than just a one-man team and if his mates were asked to carry more of a load perhaps they could. And with Westbrook possessing the ball at such a protracted rate, it could be argued that the development of those around him has been stifled.  But we’ll never know because Russell isn’t all that inclined to give up the rock.

But what about his assist total, man? He’s averaging 10.4 in that category so he can’t be all that much of glory, right? Well, not necessary because with the ball continually in his hands, he would be absurdly incompetent if he didn’t put up decent though inflated numbers in this category.

And in today’s game, they give out assists faster than they dispense candy at Halloween. Sometimes they’re so ridiculously easy to come by it’s absurd. The criteria for being credited with a helper has dramatically changed from the time when Robertson was demonstrating his mastery on the court. If Westbrook had played in Oscar’s era, his assist count would be cut dramatically while if the “Big O” played today, his number of feeds would skyrocket at least two-fold. Moreover, if Westbrook had toiled in virtually any other decade but this current one, his teammates would have justifiably reined him in and not have allowed him to predominate to such an extent.

Another point to ponder is that Westbrook can be a bit untrustworthy when he does have ownership. Averaging a sorry 5.4 turnovers per game means that he’s often loose and careless with the roundball. In some respects, maintaining possession and the OKC star don’t exactly go hand-in-hand.

Simply stated, Robertson’s deeds were and are more impressive because of his superior efficiency and economy. With the Hall of Famer you got plenty more without the unnecessary ancillary mistakes. Though certainly not as scintillating or stupendous as Russell, Oscar got it done with greater effectiveness while also creating a more conducive team environment. With Robertson, you never got the sense that he was constantly off on an island by himself. The team was still the central focus. Not so with Westbrook. His massive ego on the court frequently reduces those around him to nothing but immaterial bystanders.

One of the hot-button controversies raging in the NBA today is who should be the league’s MVP? The two candidates generating the most buzz are Westbrook and Houston’s James Harden although if things were really on the square and based upon true overall value, LeBron James and ex-San Diego State and now San Antonio standout Kawhi Leonard should be the frontrunners.

But the sentiment seems to be clearly trending towards Westbrook and Harden and if that is indeed the case, then I definitely side with the latter. Because space is limited, I’ll provide the Cliffs Notes as to why Harden is more deserving. In a nutshell, Harden’s stats are nearly equivalent to those of Westbrook’s, he has helped Houston become the most surprising team in the league and unlike his OKC counterpart, James has unquestionably lifted the game of all those around him. Add to this the simple fact that Harden has been the igniter that has turned the Rocket offense into one of the 10 most prolific of all-time and for me, the verdict is in. It’s Harden by a considerable margin.

Again, none of the negatives raised against Westbrook can negate the reality that he is an exceptional talent. But beauty and the depth of appreciation lie in the eye of the beholder. Being an old-school devotee who values above all else the team component, Westbrook will never completely resonate with me. His style of ball is just too self-absorbing.

Regardless, it was a week to remember for Westbrook and of course, Garcia. When opportunity came calling, they embraced the moment and answered the bell. And now, because of their ability to impressively rise to the occasion, they each own a piece of history that can never be taken from them.