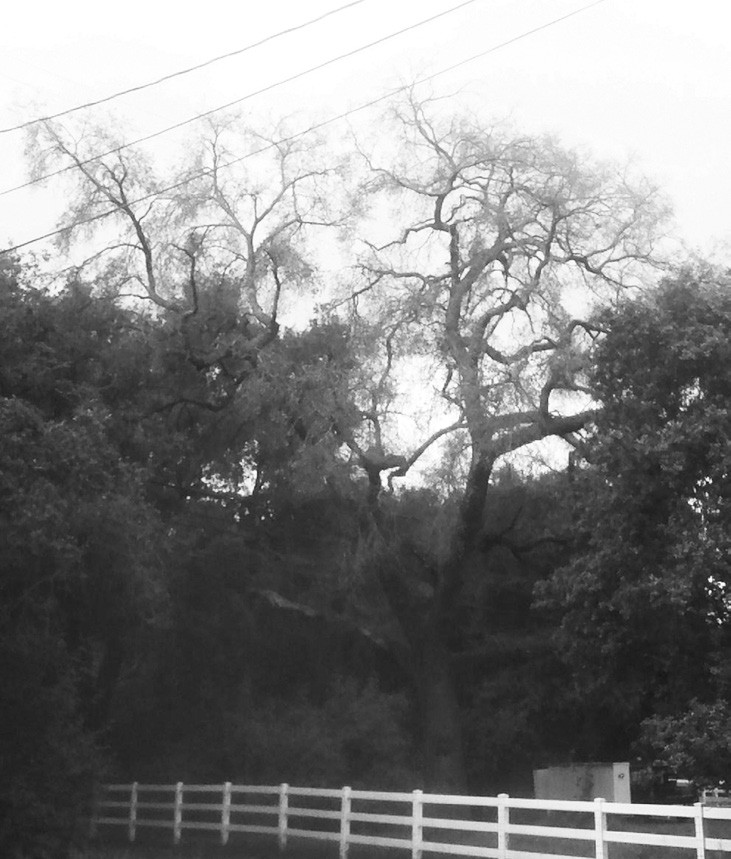 above: Diseased oak trees after being infest­ed by the Goldspotted oak borer (GSOB).

An invader from another country has already devastated nearby Ramo­na, Julian and Cuyamaca. Escondido could be next!

What are these invaders attacking? The answer is the beautiful live oaks that give Escondido and other parts of the county their special character. Their favorite victims? The oldest trees, because their thick bark makes the best home for their eggs.

The intruder? The Goldspotted Oak Borer (GSOB) pronounced “Gee Sob.” GSOB is a small beetle with gold spots on it. It looks tropical. It is a non-native invasive species whose place of origin is Central Mexico and Arizona.

Once the beetle invades a tree, there is no known defense. The only defense is to be proactive and take steps to make your oaks healthier so they can resist this pest that, so far, has no natu­ral enemies in this area.

According to arborist Tom Stephan, these insects kill live oaks. “Ninety percent of the oaks you see are live oaks,” he told Times-Advocate this week.

Stephan can recall with perfect clar­ity the first time he encountered the GSOB ten years ago in the Thing Val­ley Ranch near the Mexican border.

“I was the first arborist called on the scene ten years ago,” he recalls. “I made a bad decision and told them to call the Cooperative Extension and the County. They didn’t come out for three years. By then it had spread to three other ranches. If I had told the client to call a private tree sprayer there is a good chance we would have nipped it in the bud. The government dropped the ball.”

Now Stephan is sounding the warn­ing to places like Escondido where GSOB hasn’t yet arrived—and where there is still time to take the steps to protect the existing oaks from attack.

Another property, this one located in Ramona once looked like a sylvan glade. “One hundred oaks died on this guy’s property. It’s nothing but stumps now,” says Stephan. “The wood is in­fested and the owner can’t even move it.” It’s because of the GSOB that it is illegal to move firewood any sig­nificant distance in San Diego County. But that precaution won’t last forever as the beetles are capable of flying nine miles in a night.

Ten years after Stephan first encoun­tered the GSOB the County, state and federal governments are now very well aware of the GSOB.

On the University of California Co­operative Extension website you will find a large section devoted to the pest: “Goldspotted oak borer (GSOB) Agri­lus auroguttatus is an invasive pest contributing to the on-going oak tree mortality occurring on federal, state, private, and local Native American lands in San Diego, Riverside and Or­ange Counties in southern California. Widespread oak mortality can have severe implications to the environ­ment and human safety. Due to the current and potential impacts to Cali­fornia oaks and communities, public and private organizations are working together in the research, education and outreach efforts related to GSOB pest management.” You will find similar warnings on the U.C. Davis and U.C. Riverside websites.

According to the U.S. Department of Agriculture as of 2014 GSOB had killed 30,000 oaks in San Diego Coun­ty. On the USDA website you will find this grim assessment: “Goldspotted oak borer larvae feed beneath the bark of oaks in the red oak group, and dam­age the vital tissues of the main stem and larger branches. Generally, a few years after initial infestation, trees de­cline and die from the damage caused by multiple generations of this aggres­sive beetle.”

Tom Stephan is a former certified arborist (Western Extension 3031) recognized by the U.S. judicial system as an ex­pert witness. Shortly after discovering the GSOB threat Stephan tried to warn the people of Ramona, where he lives.

“The people in Ramona are not en­lightened,” says Stephan. “Two years ago I wrote a letter to the editor of the Ramona Sentinel and said this beetle is showing up. I wrote that it takes two years to get the tree’s vitality up to fight the bug. You need to hire me or someone like me now or the coming storm will sweep aside your trees.”

In May of 2015 J. Harry Jones wrote in the U-T of Dos Picos County Park in Ramona, where for decades the main attraction was: “its lush canopy of coastal live oak trees 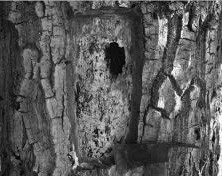 right: A “gallery” show­ing what an infestation of Goldspotted oak borer (GSOB) does to a live oak.

providing remark­able shade during even the hottest parts of the summer.” The canopy, wrote Jones, “is now largely gone.” Over 100 oaks had to be cut down when they be­came infected by the GSOB.

As Stephan describes it, “It has not hit Escondido yet.” The vulnerability of the trees is enhanced by the drought. “The drought stresses them and the beetle finishes them off,” he says.

Yet protecting live oaks in Escon­dido is relatively easy, says Stephan. “You need to get the vigor of the tree up (that’s me) and then hire a tree sprayer to kill the bugs.”

Stephan is somewhat critical of the steps that the County has taken to fight the GSOB, or rather the lack of steps. He criticizes “the powers that be” that went to great efforts to find a wasp to fight the Eucalyptus beetles, “and they are a non-native invasive species and here our precious heritage oaks are dy­ing and they are doing nothing except having meetings and saying you need to keep them as healthy as possible.”

He advocates recruiting volunteers to go around areas where the beetles may be and spraying them to keep them from attacking healthy trees.

What can you as a homeowner with heritage oaks on your property do to protect them?

Stephan advises a regimen of spray­ing and tree soil relations. “You need to make sure your trees have a good symbiotic relationship with Mycor­rhizae,” he says. Mycorrhizae are a fungus that oaks need. In fact the trees will die without it.

“Without Mycorrhizae the oak is unable to absorb water and miner­als,” says Stephan. “If you rake away the leaves the fungus dies and the tree dies. You don’t want to rake the leaves. You want to add leaves. If they blow away or the previous owner removed them replace them right now.”

Stephan recommends, “an excellent product called California Mulch. You can go through droughts outstandingly by using copious amounts of mulch.”

Stephan has formulated his own concoction that is 1/3 worm castings, 1/3 Mycorrhizae spores and 1/3 worm food. “I augur in holes next to the tree and backfill with this concoction,” says Stephan. He then pounds a burnt stick into the ground, which he calls a “tenement building,” for the fungi to colonize. “It’s literally an old Indian trick. That was the only fertilizer they had.” That’s what Stephan would do to “healthy up” a live oak.

“If you want to see what could hap­pen if you don’t do that, go the Ramo­na’s Dos Picos Park or near Mountain Woodson [also Ramona],” he says. “It looks like a war zone.”

Saving your oaks isn’t just a matter of aesthetics. We’re talking about real money and a preserved property value.

“The beetle likes the biggest most beautiful oaks first. No tree appreci­ates your landscape value more than a mature live oak,” says Stephan. “You are going to lose on average $25,000 to $30,000 from the value of your prop­erty to a lost mature live oak, which are from 250-450 years old. They were half grown when the Spanish arrived.”

Once Stephan takes the steps re­quired to bolster the oak tree’s health so that it can fight off the GSOB, he suggests putting in barn owl houses to attract the night predators to eat go­phers and rats that eat tree roots.

Don’t think too long about protect­ing your live oaks. “The GSOB will probably show up this summer, if it hasn’t already. “These things are hun­gry and they eat things fast, especially during a drought. There is no natural predator check. No breaks on the pop­ulation,” he says.

He describes what the GSOB does to a formerly healthy oak. He recalls that episode ten years ago when he was first called to see the beetle in Thing Valley.

“If you peel bark off you find beetle ‘galleries,’ that’s what they call them. They are up real high compared to oth­er insect pests who are usually found much lower.” By the time Stephan was called in it was too late to save that ranch’s trees. And now it’s too late for many trees in Ramona.

“I behaved like a good little sheeple, and told them to call the government.

If I had recommended a private company we probably wouldn’t be having this conversation. I cannot help but feel remorseful because I made a bad decision.”