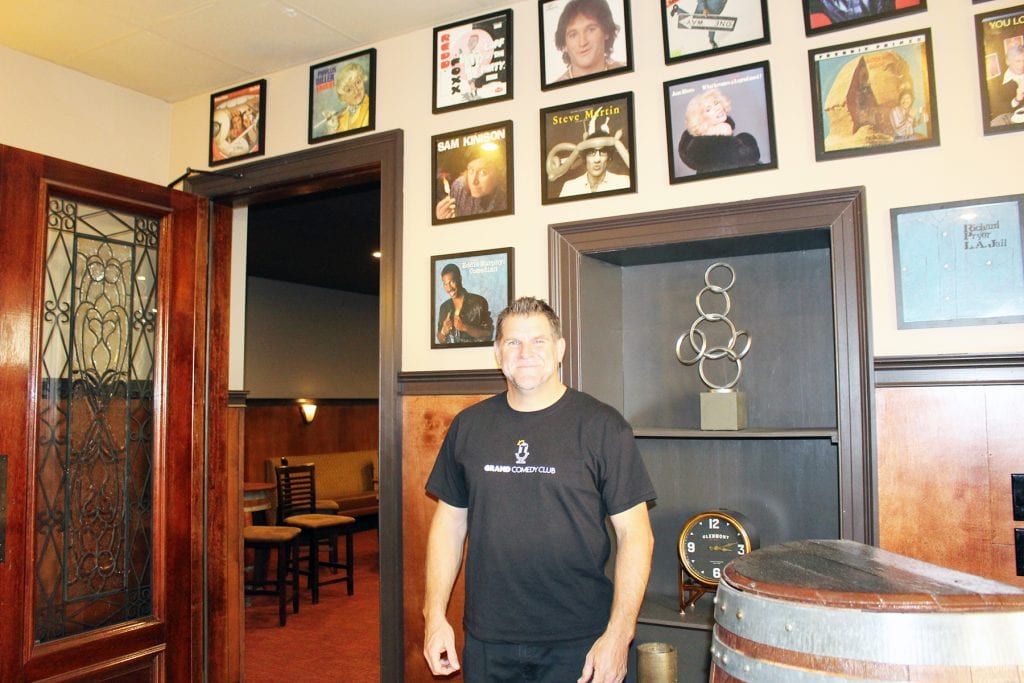 Adam Wasserman in the lobby of the Grand Comedy Club, where the wall is festooned with album covers for classic comedy albums.

The first comedy club in North County, the Grand Comedy Club, is set to open this weekend at 340 E. Grand Ave., formerly the old Il Forno pizza restaurant. Oh yes, they also serve pizza. And the following weekend, if the fates (and  bureaucrats) smile, they may also serve beer and wine along with the laughs.

“We are waiting for our beer and wine license, and will probably have it by next weekend,” says Adam Wasserman, owner of the Comedy Club.

The comedy club will have a soft opening Friday at 7 p.m. featuring Steve Simeone of Comedy Central as the opening act.

Wasserman  is a longtime standup himself, and so is drawing on his large network of fellow comics. “The good thing is I did standup for ten years, and I knew a lot of these guys,” he told The Times-Advocate. He used to put on a show at Mike’s BBQ and so he knows where to go to get the big names in laughter.

Opening up his own Comedy Club has always been on the bucket list of this Escondido native who has also done sports shows and once before had a comedy club called “Aces.” His vision is to “bring laughter to North County, to the only comedy club in North County.”

His mother, Kitty Burbridge, is the owner of the Escondido Antique Mall. She also used to run the Escondido Youth Encounter. “I met my wife at the old 150 Grand. I’m very rooted in the community,” said Wasserman.

When Wasserman was casting around for a location for his comedy club, someone pointed him in the direction of the old Il Forno pizzeria. Once he looked at the huge patio and the enormous banquet room his eyes lit up. “I saw this room and I was hooked.”

As much as it is a comedy club, the operation is also a pizzeria, one featuring a special recipe for a thin crust Italian style pie that Wasserman first encountered in a famed Wisconsin pizza restaurant called Sammi’s. Over the years he was able to piece together most of that recipe, recreated it with the help of Chef Mario Gutierez (formerly pizza chef at Il Forno) and gave it a signature look by cutting it into squares.

“If you like your pizza with crust, you can eat those pieces, or reach into the middle and snag one without crust,” said Wasserman. The menu is pretty much just pizza with some nice Italian salads, bread sticks and desserts.  The pizzas will be named after comics, but that doesn’t mean they will taste funny.  There will be build-your-own, meat lovers, veggie, Margherita, gluten free and cauliflower crust pizzas. All square cut, of course.

“We are definitely the only pizza place in town with square cut,” says Wasserman. “I love the pizza, and I figure that if I like it, others will too.” 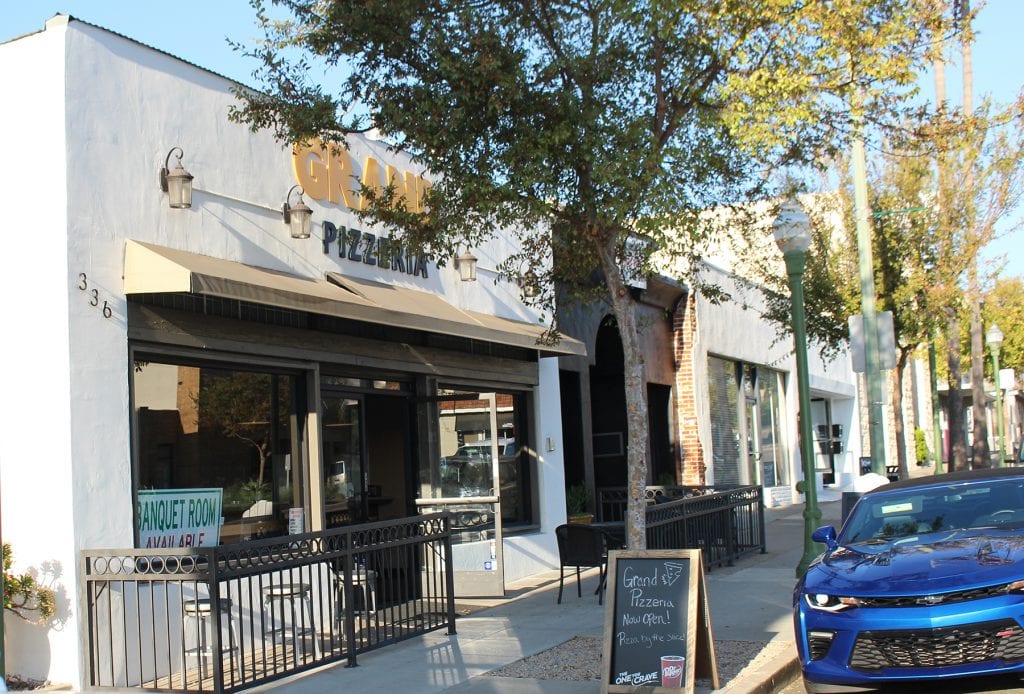 There will also be lunch specials where you can buy pizza by the slice or order personal pan pizzas.

Gutierez helped Wasserman host the business’s first big event, the Downtown Business Association meeting recently. He has  facilities to host similar events such as fund-raisers. He can also stage special comedy shows, dueling pianos and even “clean comedy” shows for church groups. That doesn’t mean the Comedy Club’s typical fare will be all that raw. “I don’t have anything too filthy,” said Wasserman.

Comedy Club shows will typically have a cover charge that will range from $15 to $25 per person depending on the comic, with a two order minimum. Open Mic night will be free.

The pizza restaurant is open seven days a week, 11 a.m.- 8 p.m. The Comedy Club will be open Thursday, Friday and Saturday with open Mic on Sunday night. Once their beer and wine license is approved they will open the tap for brews from Stone, among others.  “We’re getting Stone for sure,” said Wasserman. Call the Comedy Club at 760-741-LAFF.