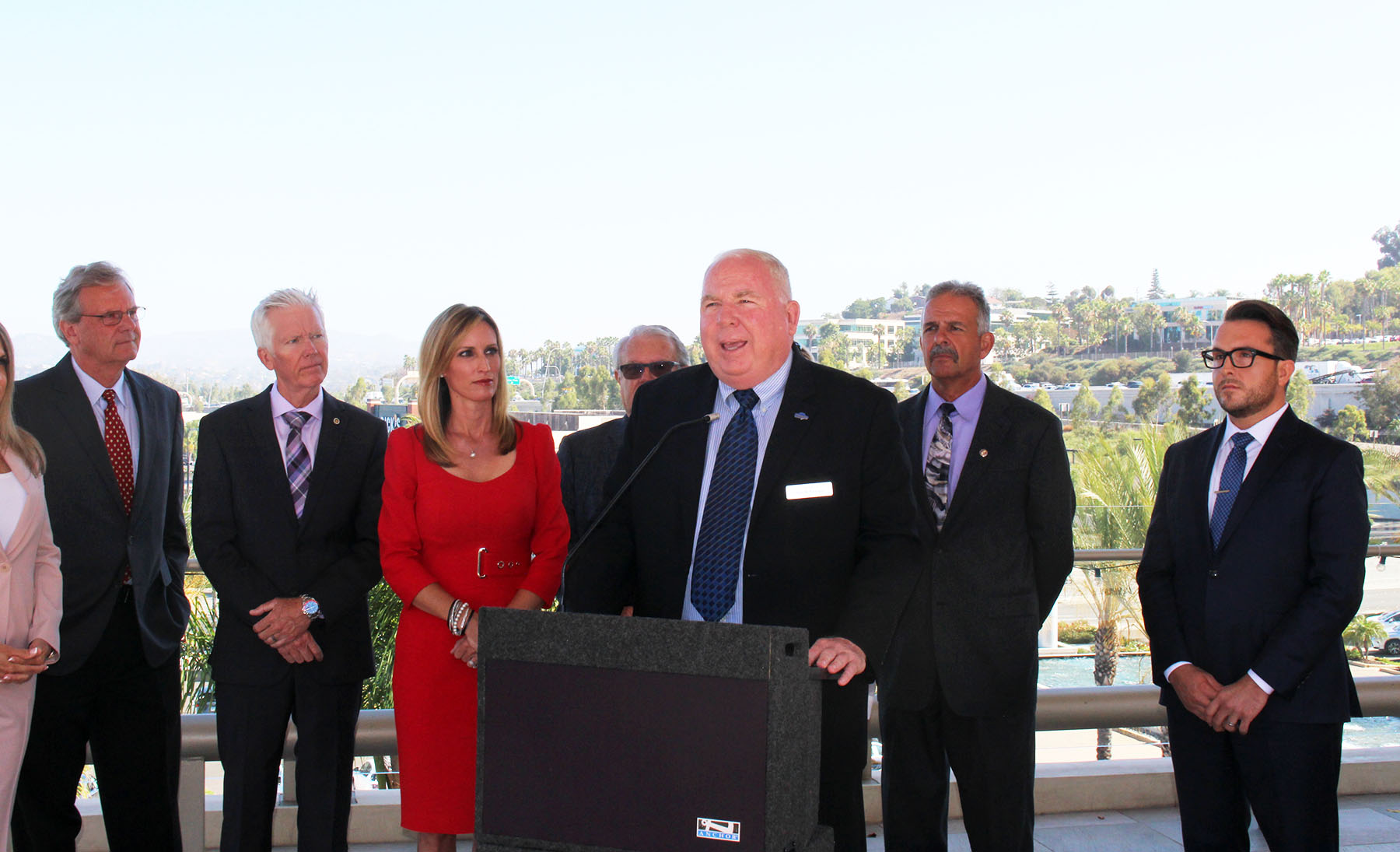 With I-15 traffic moving at a crawl in the background, North County leaders Wednesday morning gathered in the patio outside of the Ventana restaurant atop Escondido’s Lexus dealership to condemn a proposal that surfaced last Friday at the San Diego Association of Governments (SANDAG): to adopt a new form of taxation  that would charge drivers for using busy streets and freeways during peak hours of usage.

The elected officials jointly asked for local residents to join them in fighting this proposal.

Supervisors Kristin Gaspar of the 3rd District and Jim Desmond of the 5th District, joined by other North County leaders—including Escondido Mayor Paul McNamara¬—argued that imposing congestion fees to drive on highways and neighborhood streets during peak hours would only add to the economic burden of living in San Diego County. And that those hit hardest by such fees would be those who could least afford them.

The first and longest speaker was Supervisor Gaspar, who quipped,  “It’s fitting that we’re a few minutes behind, as you can see all of the trucks and traffic behind us on the highway. Not all of us could make it on time.”

Gaspar said SANDAG’s “extreme weighted voting system [whereby the City of San Diego’s voting power is proportionately larger than its population compared to the rest of the County] has not succeeded in silencing the voters.” She added, “That’s because a vocal and bipartisan coalition came together to respectively share our concerns about the ‘bold new transportation vision for our future.’ [sarcasm implied.] The response was overwhelming. Within days, hundreds of comments were received and many residents made the trek downtown to express their opinion in front of the SANDAG board. I even hand delivered several hundred responses to SANDAG’s executive director.”

Gaspar declared, “It is outrageous that we would be charged yet again to use our roads and highways.” She added, “I’m committed to fighting against this track and tax scheme and to making sure we do everything we can to meet our greenhouse gas reduction mandates without penalizing average citizens for going about their daily lives.”

Gaspar reported that on Friday after hours of testimony, SANDAG’s board “finally voted to prioritize improvements to Highways 52, 67, 78 and the 125/94 interchange. We have effectively shown that grassroots advocacy and coalition building can make a difference.

“Today I remain cautiously optimistic that the plan will include a more balanced approach, but money is a major issue. Due to massive miscalculations, TransNet only has about $3 billion left to spend over the next 30 years. That won’t cover even one of the newly reprioritized projects.”

Gaspar said it was hard to comprehend, “how we are in this place. Including the local TransNet tax, Californians already pay more than 75 cents in taxes for every gallon of gas. San Diegans beware! In addition, a new tax is on the horizon and it gets worse.”

The supervisor described a new pricing scheme: “Sometimes called ‘congestion pricing’ and sometimes called ‘dynamic pricing.’ It would track your whereabouts and charge you for use of arterial roads during peak hours. We would be charged yet again to use our local roads,” said Gaspar.

On Friday Gaspar called for a vote of the SANDAG board to eliminate this tax from the potential sources of revenue available. She described what ensued: “Shortly before the vote, Executive Director Hasan Ikhrata had this to say, ‘By doing this you are taking an important tool, a very important tool, out of the tool box and you are putting your staff in an impossible situation to meeting the requirements.’ ” 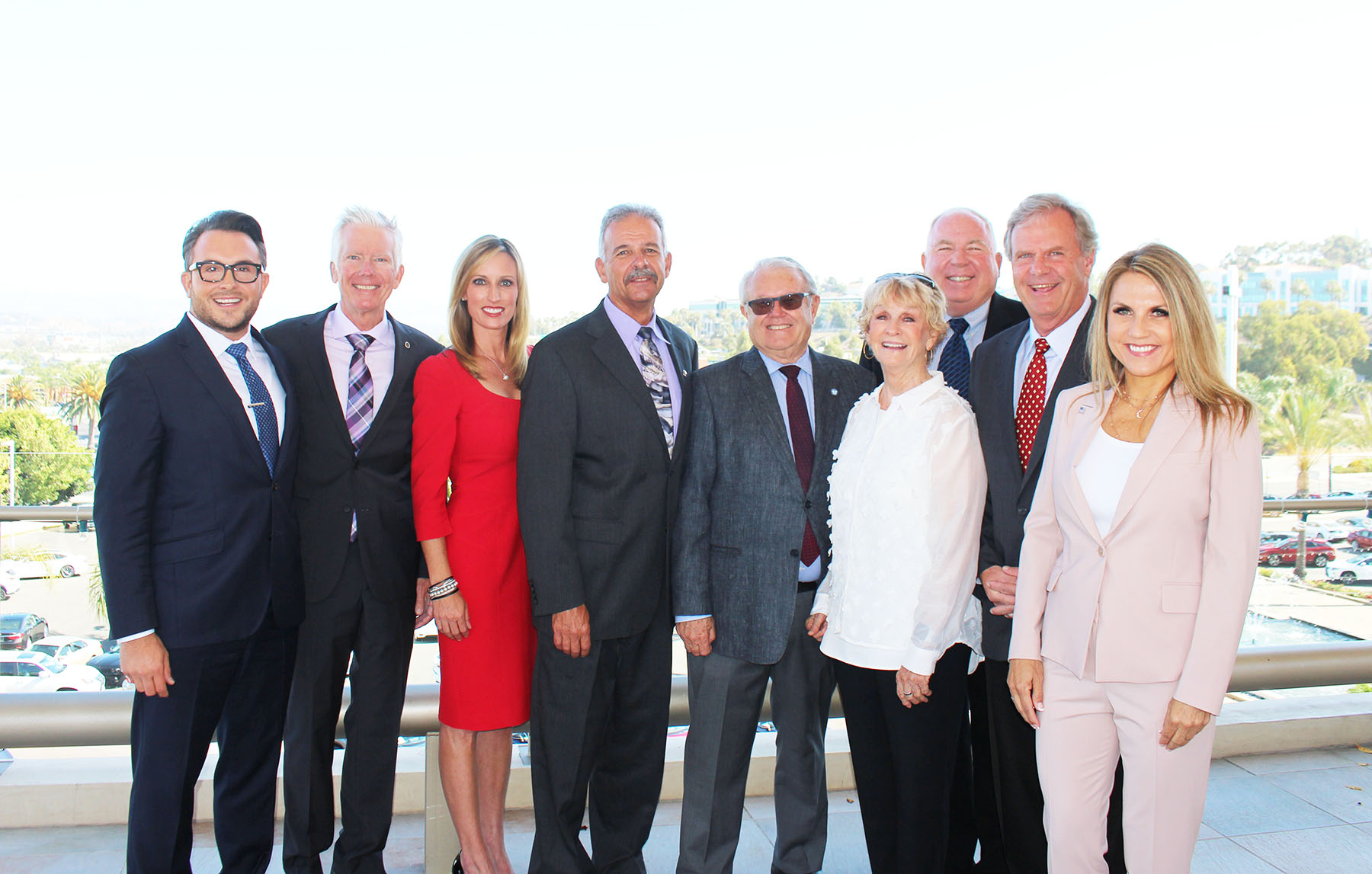 Gaspar commented, “Well, Mr. Ikhrata, we feel that the tax voters agreed to place on themselves 15 years ago is enough. However, the board majority liked punitive taxes and the congestion pricing remained on the table.”

Gaspar calls this approach, “track and tax” and added, “To be sure, we need to do everything we can to meet greenhouse gas requirements without penalizing average citizens.” She asked those watching the video or reading these words to visit stoptrackandtax.com. “We  need your voice. So your voice can be heard; so your vote can be heard.”

Speaking next, Desmond noted: “This coalition is from everyone along the 78 corridor. San Marcos, Vista, Oceanside, all coming together, along with East County partners to make sure that the voters get what they voted for and are paying taxes for now. Last Friday we achieved an important victory, for a balanced future transportation plan that will benefit ALL San Diego county residents.”

Desmond added, “Our next step is to ensure that these projects stay in the regional transportation plans to keep the funding they desperately need. These projects cannot take the back seat again like they did before.  Public transit works in certain areas. We don’t deny that but in North County and East County we need a plan that is also mutually beneficial.”

Current ridership on mass transit is 3%, he said. “The SANDAG plans gets us to ten percent, with ninety percent still on roads and highways. We need to be honest with the taxpayers to include transit while fixing and improving our roads.”

Escondido Mayor Paul McNamara added, “I believe most of the points have been made, but there are two that still need to be emphasized. One is that all of the elected [officials] here strongly support public transportation, but what they don’t support is irresponsible spending of money.

“What has not happened is that we have not had the analyses of two years to see what the details are of the project and what it would cost. It would be irresponsible for us, especially when we all know we have these hotspots throughout the county to put greenhouse gases in the air to not do something to alleviate that problem until we have some kind of detailed plan that we can review.”

Successive speakers said that the proposed fees, which they called “unnecessary” will hit the hardest are those who can least afford it.

San Marcos Mayor Rebecca Jones  said, “Forcing San Diegans to pay again to drive on local arterial roads and current highway lanes would be financially catastrophic, punishing people for wanting to be independent and wanting to live their lives is simply wrong.”

A member of the manufacturing industry also spoke. Hunter Industries based in San Marcos, employs 800 people  making irrigation equipment for the landscaping and golf course industries,

Company representative Scotty Lombardi said, “Talent acquisition is critical, and employees are making choices about where to work based upon their ability to balance work and life. Sitting in traffic is not conducive to meeting this business challenge.”