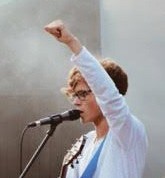 Dawson Daugherty, frontman for the band Mondays, will do a blind audition for NBC’s “The Voice.”

The 17-year-old senior at Mission Hills High School in San Marcos will be performing for the blind audition of “The Voice.”

Dawson has been singing, playing guitar and writing songs since he was 11 years old. He wrote and recorded his first CD at 13.

The guitarist/songwriter started singing in church. His father, Dan Daugherty, is pastor of The Father’s House. According to his mother, Tracy, Dawson loves music and “enjoys in­spiriting people with his talent.”

“The Voice,” in its ninth season, airs Mondays and Tuesdays on NBC.