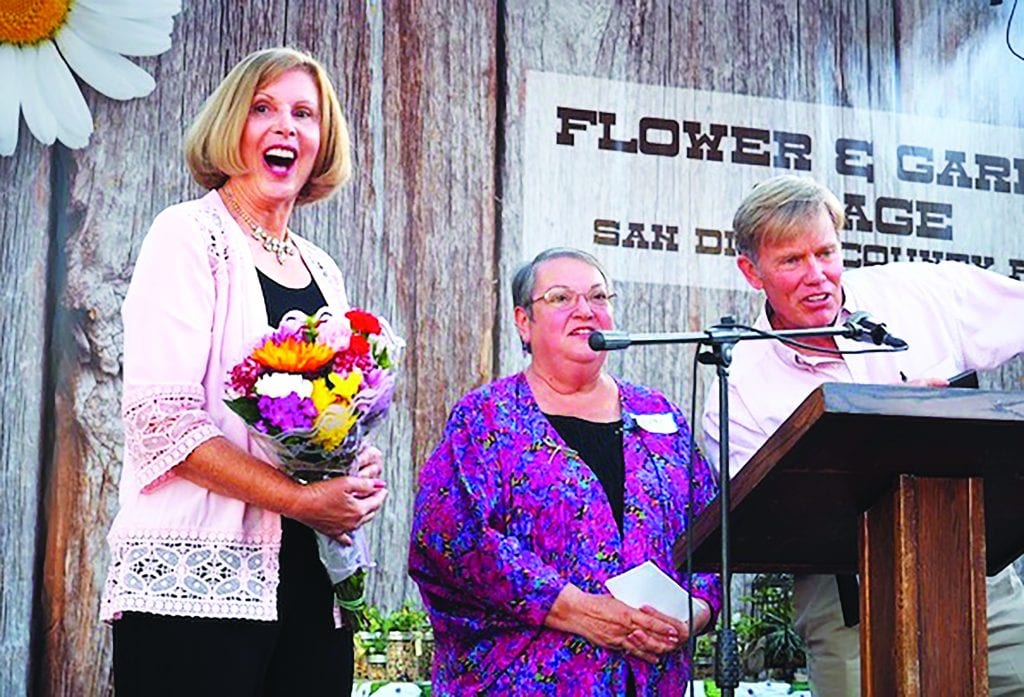 Debra Lee Baldwin reacts to finding out that a pair of Felco pruners is a customary gift for Horticulturist of the Year honorees. With her on the Del Mar Fair’s Flower & Garden Stage are San Diego Horticultural Society past president Susi Torre-Bueno and president Jim Bishop. Photo by Hannah Eubanks

SDHS president Jim Bishop told the assembly, “Every year the board selects an important member of the local horticultural community to honor as our Horticulturist of the Year. The award recognizes an individual for a lifetime of achievement and service. Multitalented Debra writes with an evocative and nuanced vocabulary, paints richly hued and lifelike watercolors, takes vibrant photographs, gardens with enthusiasm, and shares all her passions through books, lectures, videos, and social media.”

Baldwin, a SDHS life member, was introduced by past-president Susi Torre-Bueno, who gave an informed perspective on the popularity of succulent plants. Baldwin authored three bestselling books about what she calls “plants that drink responsibly” and gardens with them extensively on her own half-acre. Baldwin is credited with launching the worldwide popularity of succulents via her books, magazine articles, website and nearly 200 YouTube videos (currently at 2.8 million views).

Torre-Bueno said of Baldwin, “Debra shines a spotlight on a fascinating group of plants that had mostly been relegated to the pots of passionate hobbyists. She has done a great service to the horticultural community by her years of work in promoting awareness of and appreciation for the use of succulents in the landscape. I’ve lived in San Diego for over 30 years, and until the last decade or so, the only place I saw them was in a few isolated gardens. These days, succulents seem to be on every garden tour and showcased in exciting new ways in public gardens.”

Australian nurseryman and author Attila Kapitany, in his address to the biennial convention of the Cactus & Succulent Society of America, credited Baldwin as the “primary person responsible for the growing interest in succulents on the part of the gardening public.”

Baldwin, who lives in Hidden Meadows, calls succulents “plants that drink responsibly” because they store water in fleshy leaves and stems in order to withstand dry spells.

Pat Welsh of Del Mar author of “Southern California Gardening Month-by-Month,” praises Baldwin’s books as “the very best and most useful on the subject of succulent gardening.” Others by Baldwin are “Succulent Container Gardens” and “Succulents Simplified.”

Like the plants she specializes in, Baldwin is something of a global phenomenon, having produced 200 YouTube videos with combined views of 2,800,000. She also has tens of thousands of followers on social media, produces a popular e-newsletter, maintains a comprehensive website (www.debraleebaldwin.com), and speaks far and wide at major garden venues.

The second edition of “Designing with Succulents” is “basically a brand-new book,” Baldwin says. “It had to be. An awful lot has happened in the world of succulents and design since the title’s initial release.” Illustrated with 400 photos—100 more than the first edition—“it encapsulates the essentials of the original along with a decade’s worth of appealing and innovative ideas”

The completely revised, celebratory tenth anniversary, second edition of “Designing with Succulents” is a fall 2017 Timber Press release. The book is available for pre-order and ships August 23.