No panic Cougars rally impressively for 66-60 win over Serra 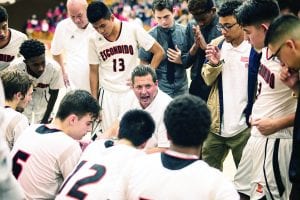 Esco coach Paul Baldwin, shown here during a timeout last season, likes the way his Cougars have started out the 2017-18 campaign.

When the visiting Serra Conquistadors raced out to a 17-2 lead midway through first period of last Friday night’s game against Escondido High (4-1), the Cougar fans in attendance became more than a bit uneasy.

There was considerable squirming in the bleachers, a few plaintive pleas to get things going and an overall sense that this probably wasn’t going to be Esco’s night.

But the mindset of the Cougar head coach Paul Baldwin and his players didn’t reflect an overwhelming amount of concern, let alone panic. Yes, there was a sizeable hole to overcome but never was there a feeling on the Esco sideline that it couldn’t get the job done or that the game was anywhere near being a lost cause. The Cougars’ belief never wavered or waned.

And because the Cougs were convinced they would work their way back into a competitive position, that presumption was handsomely rewarded with an eventual come-from-behind 66-60 victory over the Q’s.

Thanks in large part to the clutch and determined efforts of guard Jacob Hutchinson (17points) and forwards Chris Landry and Ryan Green (16 and 10 points respectively), Esco managed to dig its way out of that significant deficit by the third quarter while on its way to a memorable comeback win. Needless to say, the Cougs had fashioned one heck of a turnaround.

For the competitive Q’s who competed right down to the wire, they were paced in scoring by their guard and captain Alex Bell who tallied a game-high 23 points while 6-2 junior Jeremiah Brown was also a major factor with 16 points of his own.

“With it being the first home game, we probably came out too high and expended too much nervous energy,” said Baldwin of his team’s sluggish start. “And we were playing too quickly, settling for rushed shots. But once we settled down and were more effective with our transition defense, that’s when we started to roll and got right back into the game.”

Perhaps the bedrock of Esco’s confidence came from the fact that the Cougars had gotten off to a fast 3-1 start on the season with a nice run through the Morro Bay Tournament, which culminated in a championship berth and a runner-up finish.

But obviously Serra (2-3) hadn’t heard of Esco’s exploits or apparently didn’t put much stock in them given the manner in which the game began. The Conquistadors, whose predominantly brown uniforms remarkably resembled those of UPS drivers, broke right from the gate and didn’t stop until they had boat raced the Cougs on their way to establishing the huge margin mentioned above.

The igniters of this opening run were the sophomore Bell, who buried back-to-back treys and a putback, and Ty Dixon, who went hard to the hole for a pair of driving layups. But by this time, the Cougs had resolved to begin their resurrection and did so by scoring 13 of the quarter’s final 15 points that helped get them back in the hunt at 19-15.

The senior Green was the catalyst of this key spurt with a nice putback, another hoop from in tight and then a sweet shot from the outside. Sharpshooter Wes Jones aided the cause with a downtown 3-pointer from the right corner while the athletic Hutchinson tallied on a nifty spin move and a beautiful step-back jumper right before the buzzer.

The second quarter proved to be low scoring but four points apiece from Green and smooth forward Haikeem Barber got the Cougs even closer at the half (28-25). The highlight of the period was provided by Esco’s Justin Fox who made a terrific steal before finishing things off with an assertive layup. 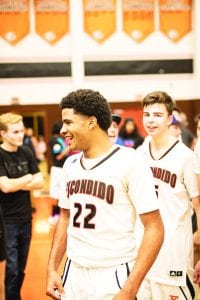 With their aggressive zone defense continuing to trouble the Q’s, the Cougs put together another shutdown quarter right after intermission, holding the visitors to just 10 points while scoring a decisive 20 themselves.

It didn’t take long for Esco to claim its first lead of the contest right out of the break. A Hutchinson layup off a pretty feed from Barber was quickly followed up by Barber’s aggressive slash to the hole that staked the hosts to their first advantage of the night at 29-28. The Q’s talented Bell got loose and knocked down a jumper to put his club momentarily back on top but this was to be Serra’s last hurrah. When the energized Landry came up with a steal and converted a layup that totally juiced the crowd, the Cougs had the upper hand at 31-30 that they would never relinquish.

By now, Landry was beginning to take the game over with his tremendous hustle, his rugged work on the boards and his active hands, not to mention his timely scoring. Down the stretch of the third stanza, Chris would deliver a pull-up pop, a fluid baseline jumper and then another steal that preceded an emphatic layup. Combined with five more points from Hutchinson that included a bomb from distance, the Cougs had assumed control at 45-38 by period’s end and gave off the vibe that nothing or no one could stop them from there on out.

But the resilient Q’s refused to quit and when Bell deftly banked one home to draw his team to within 62-60 late in the final period, the Cougs would be forced to answer one final time. The response came from the experienced Jones who after being intentionally fouled, went to the charity stripe and calmly made no mistake with two swished free throws that salted things away. Two more charity tosses by the sophomore Fox proved to be the capper and made the final count 66-60 in favor of the hosts.

Though there were contributions aplenty for the Cougars, Landry and Greene were particularly conspicuous with their all-out efforts and their propensity for coming up with the big play, whether it came in the form of a clutch hoop, a needed rebound, providing an important defensive stop or coming up with a vital steal. “In addition to other things, those two guys are a pair of real battlers,” praised Baldwin. “Ryan has a great mind for the game and Chris is just one heck of an athlete.”

Moving forward, Baldwin likes the makeup of his team, with its enviable mix of experience and youth. He also has taken note of the chemistry that exists on his squad. “This is a group that has really bonded,” says the coach. “The guys truly do get along and genuinely like each other.”

One other aspect of his team that has Baldwin enthused is the manner in which it can put into practice the strategy that’s imparted to it. In other words, these players are good listeners, highly coachable and know how to efficiently process information. “We drew some stuff up tonight and they did a great job of executing it. I was really pleased with that.”

As this still young season unfolds, the Cougars will be required to prove themselves in many other areas in order to have the successful season that they both seek and expect. But this much is for certain – based on what they showed against Serra, they already know how to come from a long way back!