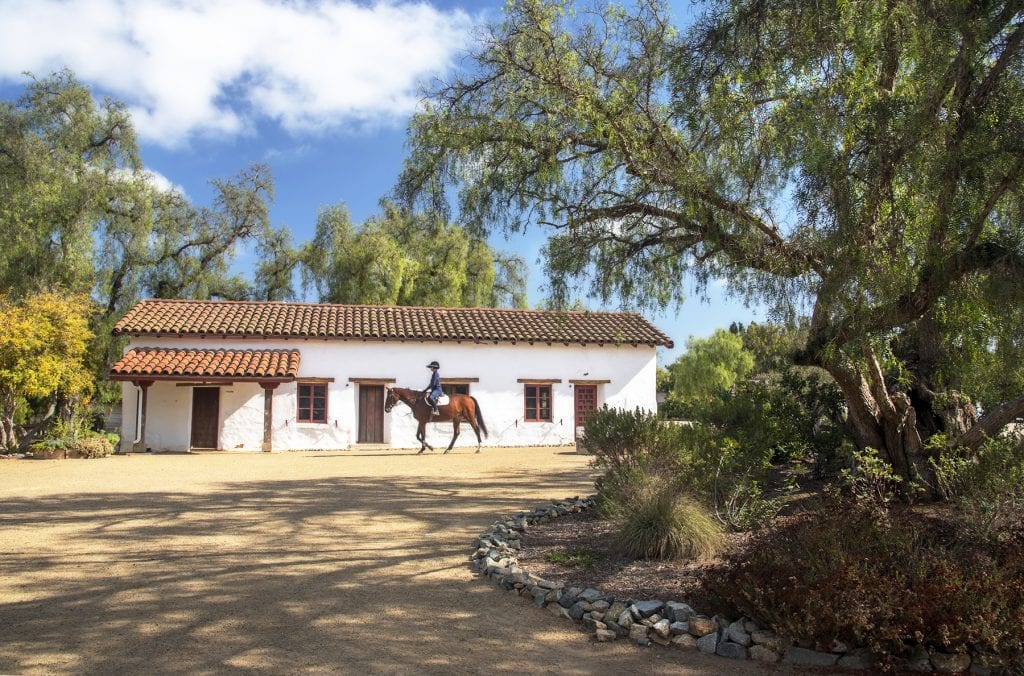 The Osuna adobe home is one of four houses included in the Adobe Home Tour in March. It dates back to the 1800s. Photo by Don Bartletti

Adobe haciendas and ranch houses sprinkled throughout the rolling hills of North San Diego County serve as enduring reminders of the region’s Spanish-Mexican rancho heritage. The 9th annual San Diego Adobe Home Tour explores this Romance of the Rancho by opening the doors to four beautiful adobe homes and properties in Rancho Santa Fe and Escondido.

Much of our local adobe rancho history has crumbled into ruins, a trend that changed course at the turn of the 20th century, when gentleman farmers looking to escape urban life moved into the area to plant citrus groves in Escondido and develop equestrian facilities in Rancho Santa Fe. With a renewed interest in a simple life where handicraft and living close to nature was emphasized, landowners and their architects restored abandoned adobe structures and built new hacienda-style and Spanish Revival homes using bricks of native adobe mud.

This year’s tour showcases the 1831-built Osuna adobe, situated on the old Mexican Rancho San Dieguito land grant, near what is today the village of Rancho Santa Fe. In 1924, a wealthy business owner seeking to breed Kentucky racehorses commissioned Lillian Rice to oversee the restoration and rehabilitation of the old adobe home. The property today is a horse-boarding and -training facility and the tour offers an opportunity to view the house, which is rarely open to the public, within a working horse ranch.

Further along on the Del Dios Highway linking Rancho Santa Fe and Escondido, Louis M. Richard, geologist for Gladding McBean and Company, built a ranch house for himself and his family in 1926. The “beautiful Spanish home” with a view over Lake Hodges features an adobe-and-stucco structure blending Mexican-patio rancho and Spanish Revival styles, hidden behind extensive gardens reflecting the changing moods and lighting of each passing day.

The popularity of adobe ranch homes enjoyed another revival in the 1950s, though smaller in scale and in urban and suburban settings. The romance of these adobe homes is represented by the use of rough-cut beams, tile roofs, practical floorplans and commanding views. In Escondido, the tour will feature a 1958 adobe ranch-style hacienda built by Weir Bros. Adobe Co. For several decades, this expansive family home functioned as a place for community fundraising and entertainment. The current owners have decorated with Mexican and Spanish folk art and a bright Mexican palette that evokes an earlier time.

Nearing the end of this midcentury era of adobe construction, a local dentist designed and built an adobe in Escondido as an investment property. The sprawling hacienda-style house was built in 1982, with numerous fireplaces and post-modern construction incorporating the classic features of the traditional ranch.

The Osuna Ranch and the three homes on the Ninth Annual Adobe Home Tour represent the entire spectrum of San Diego County’s adobe heritage. Tickets will be available online in January 2020.

Modern adobe construction wasn’t rare in San Diego’s North County, but it also wasn’t common — until a revival in the late 1940s.  In the mid-20th century, it became so popular in the region that today the Escondido area has the highest concentration of adobe homes and structures anywhere in the country outside of New Mexico.

Given the thermal properties of thick adobe wall construction, which allows for less use of energy for cooling and heating, adobe builders were creating environmentally friendly “green” homes well before there was a call for such a thing. Many of the homes were built with bricks made on site, reducing the need for shipping.

In the early 1980s, the state of California made significant changes to building codes – most notably seismic restrictions – which slowed the adobe building boom. As a result, though homes have been built featuring non-structural adobe brick facades, the era of true adobe home construction came to an end.

Because adobe houses will never be built on a large scale again in California, the collection of existing homes across San Diego’s North County is a finite treasure that requires the stewardship of people willing to maintain these now irreplaceable structures.

The Adobe Home Tour is a volunteer effort of the San Diego Adobe Heritage Association, whose mission is to inspire the appreciation and understanding of adobe heritage in San Diego County. From its earliest days, settlers of southwestern California have appreciated the practical and aesthetic values of adobe home construction, and today’s adobe aficionados across San Diego County are eager to grow awareness of the uniqueness of these architecturally significant structures. The San Diego Adobe Heritage Association maintains a website which serves as a resource for homeowners looking to remodel, restore or maintain their adobe home, or for anyone with an interest in adobe construction.

Tickets, which cost $30, are available January 2020 from the Adobe Home Tour website adobehometour.com or from the Escondido History Center, 321 N Broadway, Escondido, 92025, escondidohistory.org

Ticket holders will redeem their receipt for a program at one of two locations in Rancho Santa Fe and Escondido. This is a self-guided tour; the program lists the addresses and directions to the Osuna Ranch and three homes.

These are older, private properties with uneven steps, narrow entries and steep walkways.