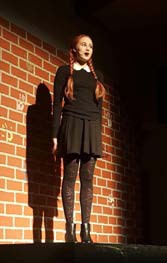 Over the weekend Community Players Theatre based at Community Lutheran Church in Escondido celebrated their 10th anniversary of shows the Night on Broadway, which gave members a chance to highlight their individual talents. A total of 23 acts performed. 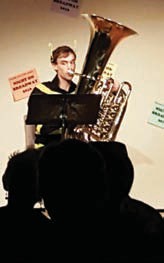 Christopher Schwinger surprises the audience with his rendition of “Flight of the Bumblebee” on the tuba.

The show opened the season with a variety of acts including comedy, dancing and music. The ticket sales were a fundraiser for the upcoming season.

The Players are entering their 10th year of shows. 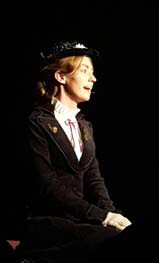 Chelsea Robinson sings to the crowd “Feed the Birds” from Mary Poppins.

Their first was Our Town, and this year they will be adding two more shows (a February show and a July show).

The crowds were very enthusiastic and the group gave away four season tickets for this year as door prizes.