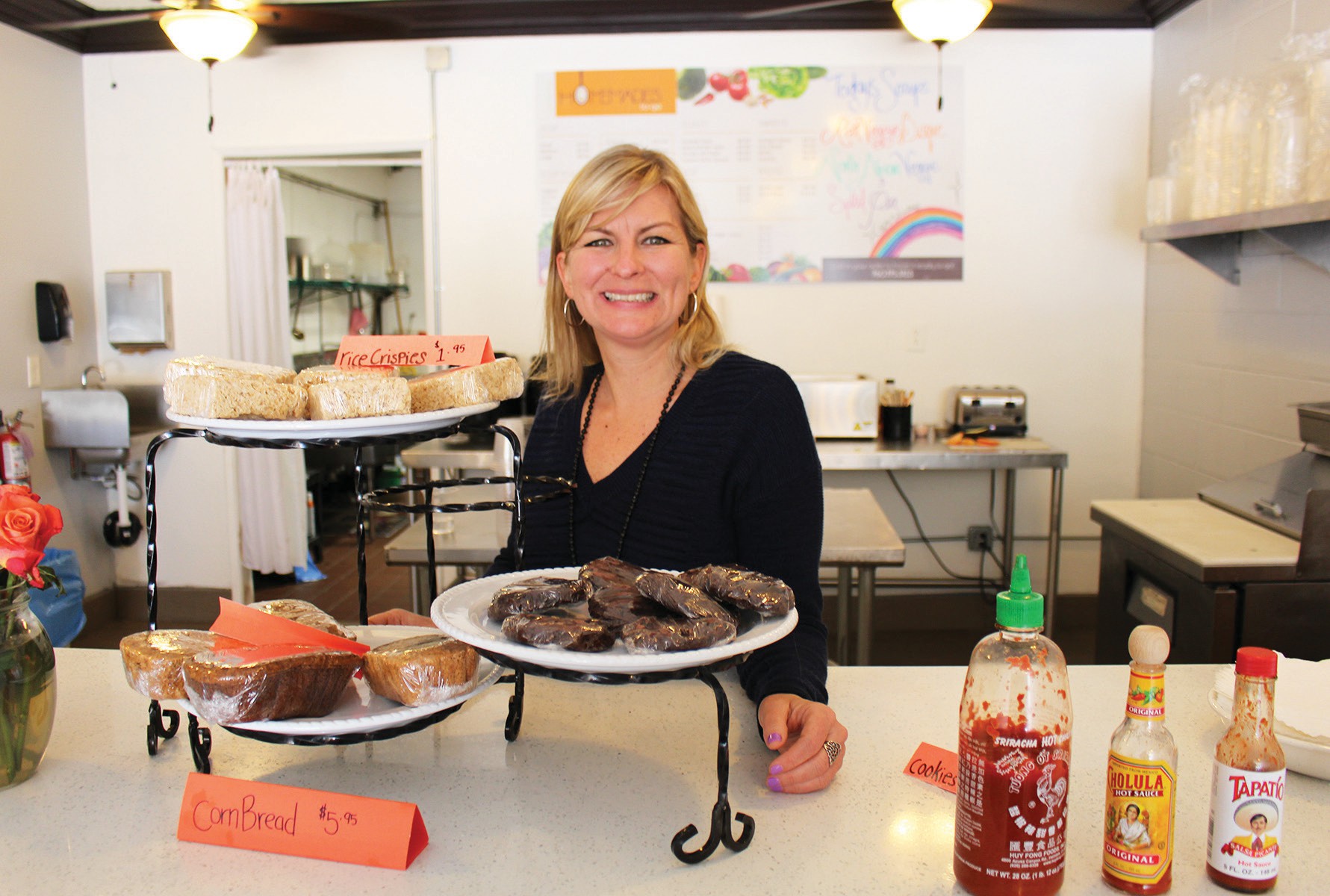 Shanti Clayton with some of the sweets that she has for sale, which include vegan rice crispies, chocolate chocolate chip cookies and pumpkin bread.

Shanti Claydon has been trying her vegan recipes on clients, customers at the farmers market, and perhaps most importantly, her family, for years.

If you eat at California Homemades to Go, you will be eating like her family eats. “I just want people to come in and taste my food,” she says. “The fact that it’s vegan is just a bonus.”

Claydon wasn’t always a vegan, but several years ago began to educate herself about what people put in their mouths. “I started to get educated about food and food basics and changed my family’s ways of eating,” she said. “I feel like you vote with your dollars. I wanted to contribute to what I believe, which is vegan, organic and locally-sourced.”

She believes that the best kind of diet is one that is mostly whole foods, and entirely plant-based. The less the processing the better. “It’s all about the ingredients,” she said. “I’d rather focus on a few really good items than have a big menu.” 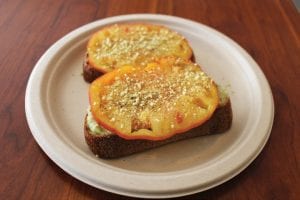 The tomato pesto toast is made with vegan parmesan (made from cashews nutritional yeast and Italian seasoning) pesto and aioli. This vegan cuisine is full of flavor and not “boring.”

Her breads come from Prager Brothers in Carlsbad, which is an artisan bakery that uses natural ingredients.

Being vegan, no animal products, such as cheese, eggs, milk or honey are used.

Claydon has been in the food business for about ten years, mainly through her catering business. She still does some catering (“Catering by Shanti”) but has mainly put all her eggs (if you will forgive the unfortunate metaphor) in one basket with the opening of the restaurant at 138 West Grand Ave. (just a few doors down from Swami’s).

She specializes in soups, some salads and toasts, including avocado, peanut butter, tomato & pesto and creamy garlic spread toast. You can buy salad with either a cup of soup or a toast.

Claydon also does meal plans for about 20 people all around San Diego County. She delivers vegan meals to her clients. If this is something that you are interested in, but aren’t for sure is entirely for you, you can try them for a week. Then, if you sign up you will get a month worth of meals that includes four salads, three hot entrees and a 32 ounce soup a week. It’s all gluten free, vegan and organic. This costs $512/ month per person. 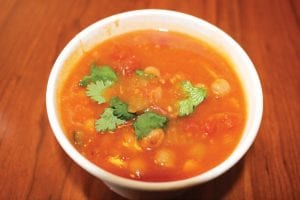 If you can’t imagine vegan soup being hearty, you should try this North African veggie soup, made with whole garbanzos, tomato, yams, carrots, celery, onion and garlic and seasoned with cayenne pepper, cumin, cinnamon and sea salt.

Another deal she offers is eight 32 ounce containers of soups spread over a period as long as you like at a discounted price of $110. Some of the soups include split pea, tortilla, creamy potato, lentil dahl, chili and carrot ginger. When it gets warmer she plans to introduce watermelon gazpacho.

Let’s talk about price. “People say this is expensive! Well the fact that 95 percent of what we sell is organic, is why. My whole thing is to give Escondido what it doesn’t have right now in the way of healthy food.”

The salads are already packed and ready to go and include garden with vegan ranch dressing, Asian with peanut dressing, kale slaw with sesame ginger dressing and mixed greens with creamy miso dressing.

“It’s a way to make eating healthy easier,” she says. Think vegan is boring. “Then you haven’t had the right vegan food,” she retorts.

How about a vegan taco salad made with walnuts instead of meat “If you get the right thing it’s just good food,” she says, not sounding the least doctrinaire. “My kids love my food. Whenever they think they are getting tired of my soups, they try a spoonful and say, ‘This is so good!’ ” 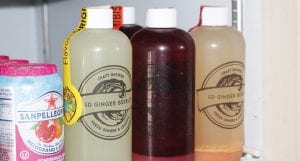 She carries a variety of healthy drinks, such as bottled ice teas, natural soda, bottled water, ginger ale and cold pressed juices. Soon they will be adding kombucha tea on tap and kefir soda, a drink that people who are trying to up the numbers of friendly bacteria to their diets will want to try since it has ten times the number of probiotics as kombucha tea.

California Homemades is open Tuesday Saturday, 10 a.m. – 3 p.m. for lunch only. However, during Cruisin’ Grand, which begins April 7 they will be open in the evenings. Call at 760-975-3923 and your order will be ready to go.

One response to “New vegan restaurant: Not just healthy, it tastes GOOD”