New method of planting could save avo industry 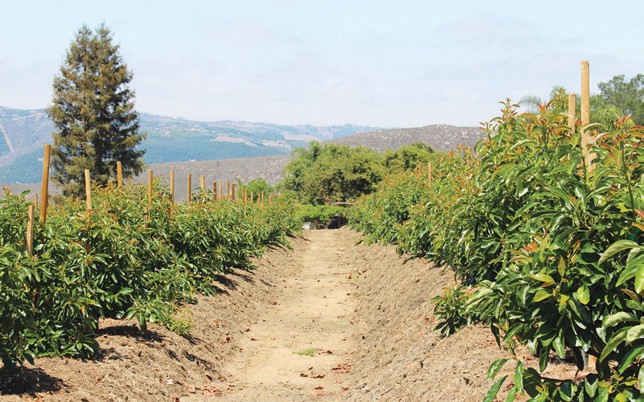 looking more like shrubs than trees, these avocado trees are the leading edge of what may be a revolution in farming.

High density planting. You may never have heard the term before, but you may hear a lot more about it in the future, especially if you are a grower, and particularly an avocado grower.

High density planting, could, in the opinion of some experts, be the salvation of the industry in water poor San Diego County. San Diego, currently the avocado capital of the world, could lose that distinction to places like Mexico, unless it is able to figure out a way to do more with less.

According to Eric Larson, executive director of the San Diego County Farm Bureau, “Avocado growers are challenged to increase production in the face of rising water prices. High density planting appears to hold significant promise for growers to overcome water prices. The successful implementation of dense planting can help San Diego County maintain its crown as the leading producer of avocados in the U.S.”

High density planting may indeed be the solution to a growing Southern California problem: how to preserve agriculture in a desert. That’s the opinion of Joe Ellis, president of Ellis Farms Inc. and Mount Palomar Avocados, which is located on Hwy 76 in Pauma Valley.

On June 13 Ellis invited a group of about one hundred area avo growers to visit his operation at 18162 Hwy 76. He will be hosting another group on July 17 or 18th.

Ellis, who has been in the ornamental palm tree business for 40 years, decided to do a hard right turn a couple of years ago and to convert several acres of palm trees into high density avocados. He was able to plant 518 trees on seven acres, which any avocado grower will tell you is much denser than trees are normally planted. This spring he planted a second series of trees, for a grand total of 1,168 trees. So far, all of the trees have survived and the first year’s group are already starting to bear fruit.

yet he appears to be as excited as a young man about the possibilities inherent in this system, which was pioneered by Brokaw Nursery LLC in Ventura. The Times Advocate met last week with Ellis and his operations manager, Ernesto Veloz.

“We hope we can save the avocado industry,” said Ellis. “Of course not many people are as crazy as I am!

As he drove around the property, showing off the neat rows of young trees, he observed, “I was very successful in the palm tree business. But we live in the desert and it’s trying to tell us something about water use. There is a lot of love in this project,” he added with a twinkle in his eye.

The key is that when you plant the trees close together, and limit their growth to about 14 feet, the water supports more trees and doesn’t require ladders to harvest the fruit. This makes the trees much more valuable, and the fruit more profitable. The trees used were a hybrid variety developed by Brokaw known as a Dusa Hass, a drought tolerant variety from South Africa.

The trees are watered using a drip system, technically a “pressure compensating emitter” which, combined with the planting scheme, saves about 40% water.

According to Ellis, “This is actually an old method that was developed about a dozen years ago by Brokaw, and which they have been using very successfully.”

This spring as part of the pruning process they took 50% of the fruit to make it easier for the remaining avocados to grow healthy and tasty. The fruit will be ready to harvest at the end of the year.

Ellis’s palm trees didn’t go to waste. They were ground into mulch and spread around the roots of the trees to keep the moisture in the soil longer and to control weeds. Brokaw’s resident avocado expert Dan Grant told them that the palm mulch was perfect.

He also told them that they picked the perfect climate 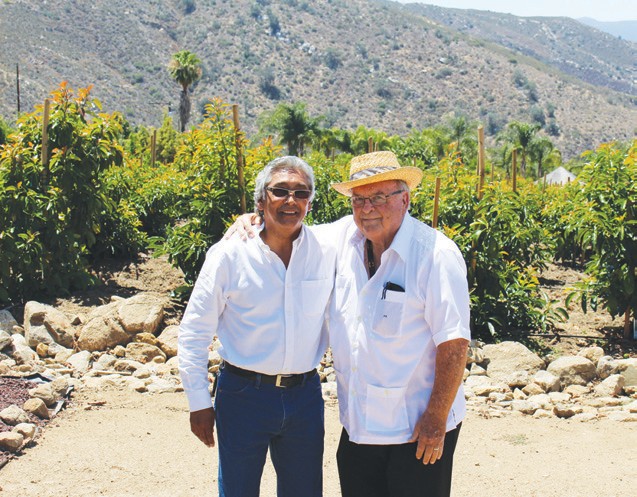 Ernesto Veloz and Joe Ellis of Ellis Farms. Switching over from palms to avocados has been “a labor of love.”

and elevation for avocados. “We are at two thousand feet. We are in a solar pocket that’s frost free,” said Ellis.

Ellis and his crew are documenting every aspect of the process. He has assembled a large binder full of detailed information and photos on how much water is used, the amendments put in the water. “We have documented every stage of this and we are offering all this to the Avocado Association,” he said. “It’s hard to get old timers to change to new methods. But the water crisis is making people look at ways to keep the crops growing.”

He points out that saving water isn’t the only advantage of using the Brokaw method. “You don’t have to get up on ladders to harvest the crop. It’s easy pickings! Your packers bid on your crop and the easier you make for them the higher they will bid. There’s a lot of liability in getting up on a ladder.”

Ellis added, “This has been a real exciting venture, using Brokaw’s method and using the drought tolerant avocados. I just wish I wasn’t eighty-seven! I don’t want to make any mistakes at my age. I’m hoping my grandson won’t have to take out a loan to go to college!”

It was a slow process that started a couple of years ago. “We couldn’t have done it at once,” said Ellis. “We had to cut down the palms and then get them cut into mulch and install the underground irrigation. That all took a lot of work. You have to be very careful because the root system is delicate.”

It helped that Brokaw shared all of its own trials and errors over the dozen years that it has been doing this method. Ellis is willing to share everything he has discovered with fellow growers. “Any grower who wants to come is welcome.”