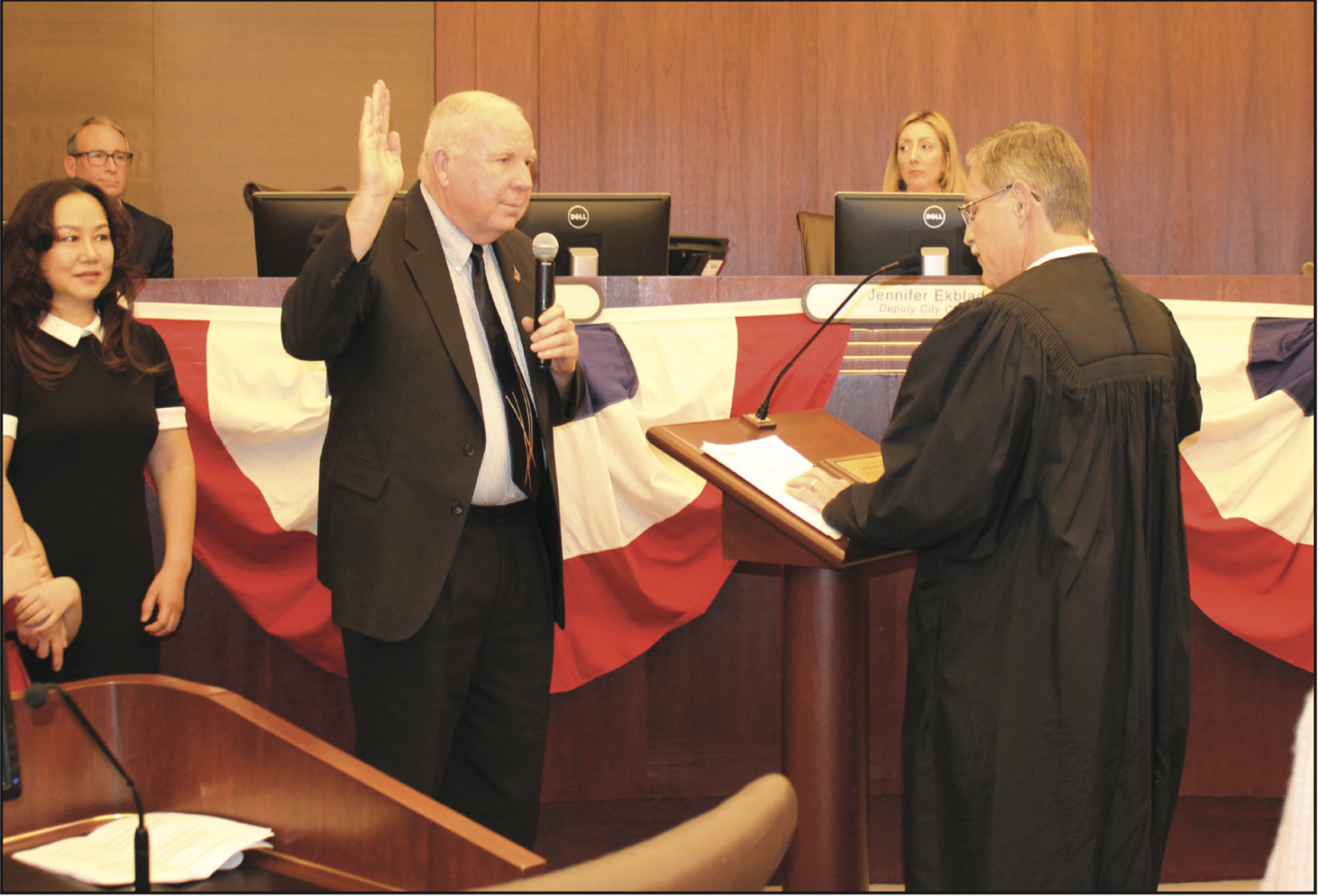 New Mayor Paul McNamara is sworn into office Wednesday night at Escondido City Hall while his family looks on.

Mayor-elect Paul McNamara (mayor by the time you read this) got a phone call the other day from a friend who joshed with him. “I hope you don’t screw it up!”  McNamara grinned and told him, “I hope I don’t screw it up either!”

A lot of people are cheering on the new mayor with best wishes, and advice, as is the case during a political transition. “I have no shortage of suggestions,” he said when asked what his goals are. However, you can probably expect the new city council will give a second look at several controversial decisions made in the last few years, including the library outsourcing, the closing of the East Valley branch of the library and the sale of Parking Lot No. 1.

I met with McNamara Tuesday at one of the salons of the California Center for the Arts, Escondido. We chatted about his goals and hopes for the next few days, weeks and months as the new broom sweeps clean, but doesn’t necessarily sweep away everything from the past.

McNamara doesn’t care about partisanship. He doesn’t care whether you are a Republican or a Democrat or a declines-to-state, as long as you want to work together to do something good for the city.

“The first thing I’d like to change is the civil discourse,” says the retired Marine Corps colonel in a low, reasonable voice. “I want to make sure people feel their voices are heard and I want to bring a lot of transparency to how we do the governing of the city.”

Another of the first things he wants to do is to review all of the commissions and committees to make sure they are doing what they are supposed to be doing. And whether they have people serving on them who are qualified and will bring something to the table. In other words, if there is a commission that deals with water, does it have people on it who have expertise in that field?

McNamara is very careful not to say anything that might be construed as a criticism or dig at his predecessor. But he gets across the idea that on commissions, for example, there will be a new philosophy.

“We want to have a robust discussion of the issues so we can work out compromises and solutions that we will be proud of decades from now,” he said.  He also communicates the idea, although without actually spelling it out, that he won’t populate commissions with yes men and yes-women.

“We absolutely need to have both sides of the aisle,” he said. “Even if we disagree, let’s get good ideas on the table.” For example, McNamara says he would like to get both environmentalists and representatives of the proposed Safari Highlands annexation proposal into a room “and see how we could get to ‘yes.’ ”

“I’m entering into this knowing we need more housing,” he said. “But if we are going to do this let’s find the smartest way to do it. The thing about land is that once you develop it you aren’t going to get it back.”

McNamara is big on “getting people together in a room” to hash out solutions. “Developers need to make money, we know that. You want people thirty or forty years from now to say, ‘That was a good decision,” he said.

In September, the City Council voted to sell the city-owned Parking Lot #1 (between Grand Avenue & Valley Parkway across the street from City Hall) to Touchstone Properties. The decision touched off a semi-firestorm, with the owner of Filippi’s Pizza Grotto saying it could force him to close, and other members of the Downtown Business Association expressing dismay. “I do think we need to revisit that,” said McNamara.

He is in favor of turning Grand Avenue “into a North County version of the Gaslamp” but he’s not sure that getting rid of a parking lot in the middle of the downtown is the best way to do that.

He also wants to revisit the outsourcing of the Escondido Public Library to a private contractor. “Are we going to get rid of LS&S, Library Systems and Services? I don’t know,” he said. “I need to look at the numbers. I know [City Manager] Jeff Epp  would say we will lose money if we do. And some people like what has been done.”

But he definitely does want to explore reopening a library branch on the east side. Obviously, the old branch can’t be reopened, because that land was sold to the Escondido Charter High School. But . . . there is another way.

The mayor-elect has been serving on the Palomar Community College board of trustees for several years. He brought up sharing library facilities with the college at its Escondido campus at Valley Parkway & Midway and College President Joi Lin Blake was quick to embrace the idea.

“Joi told me ‘I like it!’ ” said McNamara. “The Palomar College library is a public library anyway. Any resident can borrow books there.” He intends to fully explore this idea once he’s seated.

When it comes to appointing members to commissions, McNamara knows he has the moral authority of being “first among equals” on the five seat council. As the city website describes it: “The City Council ratifies the Mayor’s selections for appointments to the boards and commissions.” “I have asked Jeff to show me why people are on commissions and what expertise they bring to the job.”

Ever since the election finally tilted conclusively in his favor a couple of weeks ago, McNamara has been talking to different groups, such as service clubs and non-profits and the CEO of Palomar Health System, whom he reached out to because he felt that one of the city’s largest employers should have a closer relationship with the city government.  He has also spoken with CAFE (Community Alliance for Escondido,) Interfaith Community Services, and the developers of Safari Highlands, just to name the tip of the iceberg.

When there are several non-profits in the city that have similar missions, McNamara is interested in assisting them by providing an umbrella group that can magnify their effectiveness.

There used to be a Community Commission that concerned itself with groups such as these, and the new mayor is interested in reviving it.

He also wants to bring back the budget committee, which was abolished a few years back, to the consternation of some residents who felt this made city budgetary affairs less transparent. McNamara wants to also return to the old format of the budget whereby anyone could find out the salary is a particular official. The current budget does not show such details. Instead, it shows a salary budget for individual departments.

The new mayor describes himself as middle of the road.  He likes the old days when you couldn’t tell that much difference between the politics of the two parties. “I’m a centrist. That’s true of most residents of Escondido. We are a city of faith and values and people don’t like extremes. As a candidate I offered myself as a centrist.

So, it’s probably highly unlikely McNamara will be offering a big progressive agenda as he takes office.  “You could look on me as being the Justice Kennedy of the city council,” he quips.

I asked whether he would be holding quarterly “town hall” meetings, like his predecessor initiated eight years ago. He said it’s more likely that he will make multiple visits to any organization or group that wants to invite him.

“Whatever our politics, we should work together for the common good,” he said. “That’s the tone I’m going to set.”